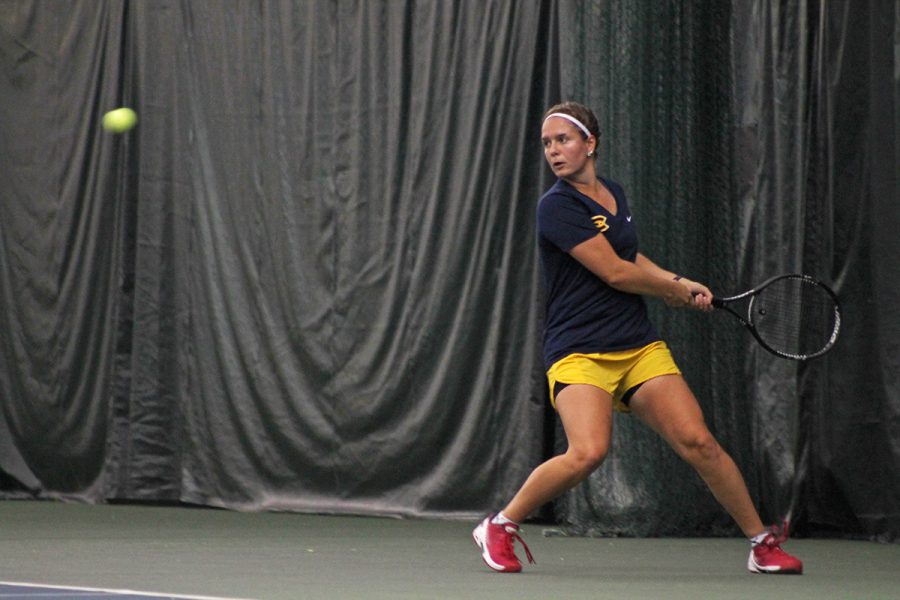 UW-Eau Claire defeats both Winona State and UW-La Crosse this past weekend, leading to another win on this season’s record.

This past weekend the UW-Eau Claire women’s tennis team took on and defeated both Winona State (8-1) and UW-La Crosse (5-4). With these victories, Eau Claire is now 6-1 in the season.

Because UW-Eau Claire women’s tennis lost to both Winona State and UW-La Crosse last season, the Blugolds had something to prove this time around.

Natalie Wijesinghe, a sophomore, said the team looked forward to this weekend’s matches to play these teams again and to hopefully come out on top.

“We knew that they were tough matches, so I think we were really just excited for the opportunity to be able to prove ourselves and give ourselves the best shot of winning those matches and just show that we could beat those teams since we lost to them last year.”

In the doubles competition against La Crosse, the first two matches resulted in victories for the Eagles, but Eau Claire didn’t go down without a fight.

Having won every doubles match against Winona State, the fight against La Crosse proved tougher for the team.

Wijesinghe said La Crosse has become a rival because they have beat Eau Claire the past three or four years. She said this made the win even sweeter for the team.

“We have made a lot of progress in terms of the overall season.” Wijesinghe said. “We have become a lot more mentally tough, even in matches that we lose we’ve done a really good job of giving ourselves the best opportunity to win them even if they don’t turn out our way.”

Head coach Tom Gillman said the team knew it was going to be a tough test with both matches.

“It was important that we were ready to play mentally and that we had a good plan,” Gillman said. “I think mostly just stay composed and play good mental tennis.”

There was only one loss for the Blugolds during the singles competition against Winona State. The team won five out of the six matches, putting them far ahead in the overall score.

On Saturday, Eau Claire held up their end by only losing two matches against La Crosse in the same category.

“We developed our games really well over the course of this season, and that has been really good to see that improvement,” Wijesinghe said.

Gillman said at the Intercollegiate Tennis Association’s (ITA) Midwest Regional Championships they really started correcting things and hoped to keep the momentum going for the matches against Winona State and La Crosse.

“I thought we showed more composure, which was probably one of the big improvements we were seeking,” Gillman said. “I think our team is always going to try really hard, we are going to compete, we are going to be a team.”

Gillman said he saw changes in the team and the improvements they were making. With the matches this past weekend, against challenging teams, he said he saw the team come together to work toward a victory.

“It was a heck of a win against both teams,” Gillman said. “It was a great uniformed effort, we really pushed ourselves and we are happy just to get by. We kept fighting. I’m sure the girls are feeling quite good about their efforts.”