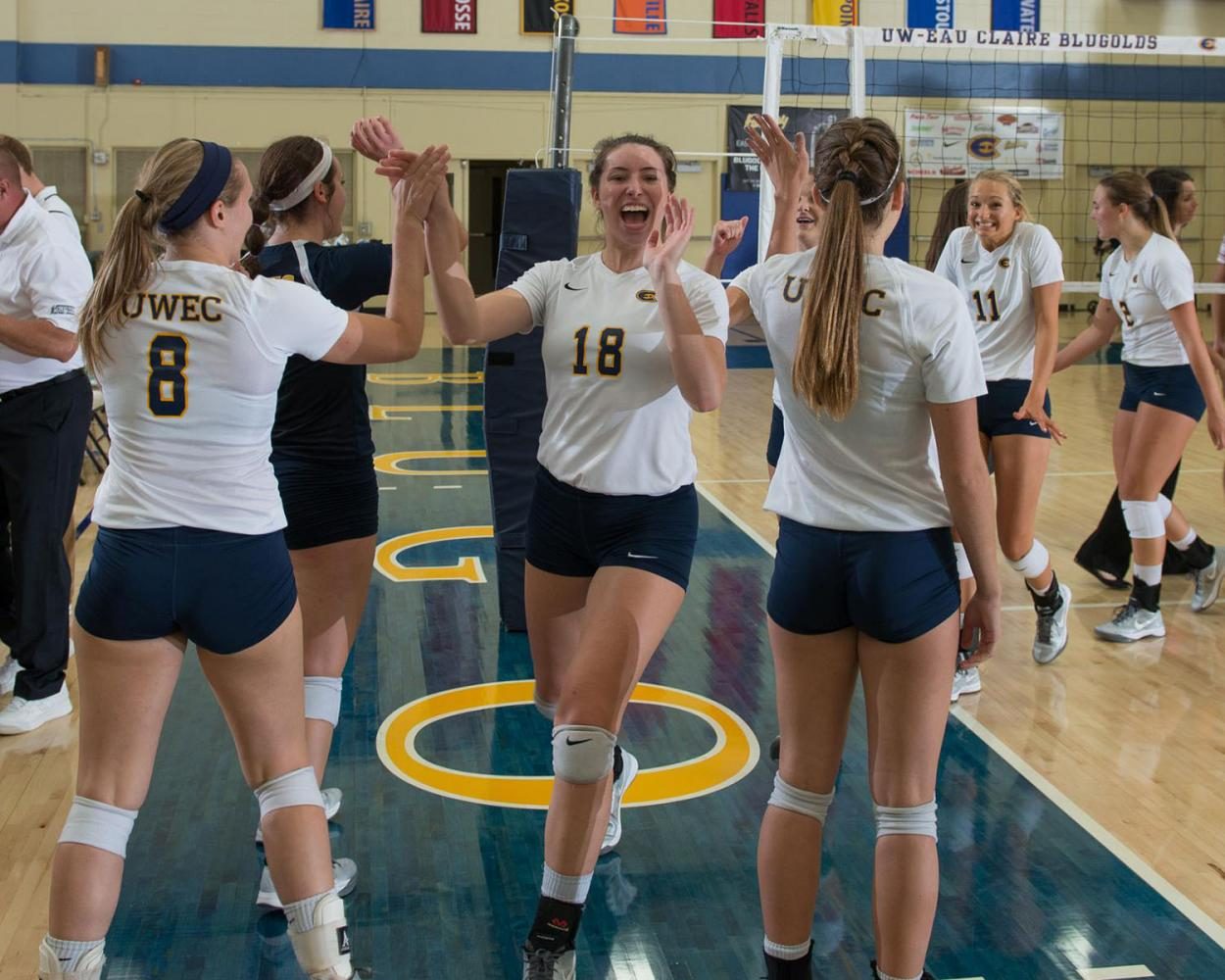 Women’s volleyball played in the Augsburg Invitational in Minneapolis where they won two of three matches over the weekend and gained another victory on Monday night in Madison against Edgewood College.

On Friday night, Eau Claire recovered from a difficult start to their season by setting the record straight with a win over the College of St. Scholastica. The Blugolds topped the Saints in four sets of three matches at the weekend’s Augsburg Invitational in Minneapolis.

In the first set, both teams struggled on the attack, hitting sub-.100 for the majority of the frame. Eau Claire finished strong, however, going on an 11-3 run, finishing with a hitting percentage of .186.

St. Scholastica fought back offensively in the second set, hitting at a .438 mark while the Blugolds decreased to .077.

Eau Claire had their best play during the third set, though they nearly gave up a 2-1 lead in the match. The Saints had a 24-23 set point advantage before the Blugolds rallied off the three straight points. Eau Claire recorded 21 kills in the set while hitting .314.

“We played at a high level and we were able to pass consistently,” Mackenzie Bachmann, the first-year outside hitter said. “I think the one thing we can always get better at as a team is continuing to keep our side of the net fast when our opponent isn’t as quick as us, and we did a good job of that.”

Finally, Eau Claire separated themselves from the Saints in set four after they were neck-and-neck at the midway point. Leaders for the Blugold’s attack were Madelyn Pashibin, the junior middle hitter, with 14 kills, Bachmann with 13 and Jessica Coyne, the junior outside hitter, with 12.

The Blugolds wrapped up the Augsburg Invitational on Saturday, highlighted by defeating the second-ranked team in the nation.

Against the Eagles, set one was the largest difference in score and only by four points. The Blugolds won 25-21.

Eau Claire followed it up with a closer score of 25-23 in set two. After losing set three to Northwestern 22-25, the Blugolds finished off the upset with another 25-23 win in the fourth and final set.

Pashibin continued her early-season tear, obtaining 16 kills in the match with a .406 clip.

Bachmann also tied for the team-best digs with 20 alongside Kelsey Kowitz, a junior defensive specialist. Madison Surprise, a junior setter and Emma Richter, a sophomore setter split the setting duties where Surprise finished with 30 assists and Richter with 21.

“St. Thomas is a really good team, and I thought we did a good job of playing tough against them,” Pashibin said. “We need to work on being able to find a way to execute and get kills against teams that have a good block and a good defense like them, and I think if we would have done this, we could have definitely gotten the win.”

On Monday night in Madison, the Blugold women’s volleyball team got back to .500 with a four-set win at Edgewood College.

Pashibin put in a lot of work for the team and continued her successful start to the season with a match-leading 18 kills on just 22 attempts. She had only one error, good for an outstanding .773 hitting percentage and added four total blocks as well.

“Mady Pashibin has truly been a crucial part of our team offensively and defensively,” Coyne said. “She carries the team on her back while being the most humble girl on the court. Our team will continue to work this next week to eliminate errors and earn more points in each set we play.”

The Blugolds sailed to victory in sets one, two and four. They topped the Eagles 25-17, 25-15, 25-11 and capped off the first two sets on 6-0 and 5-0 runs, both finished off by an ace by Talia Jaskulske, a senior defensive specialist.

Edgewood took set three by a close 25-23 margin and forced the Blugolds to play into the fourth set for a fifth straight match. After starting out the fourth and final set up 9-0, Eau Claire kept up the pace to finish off them off.

Head coach Kimberly Wudi said if she could describe how the team played in one word it would be “progress.”

“They come to practice ready to learn, they trust the process and they are getting better every time we step on the court,” Wudi said. “It’s really exciting and encouraging to have that level of commitment, especially early in the season.”

Eau Claire’s next game is the annual Nike/Eastbay Fall Classic this weekend at the McPhee Center.