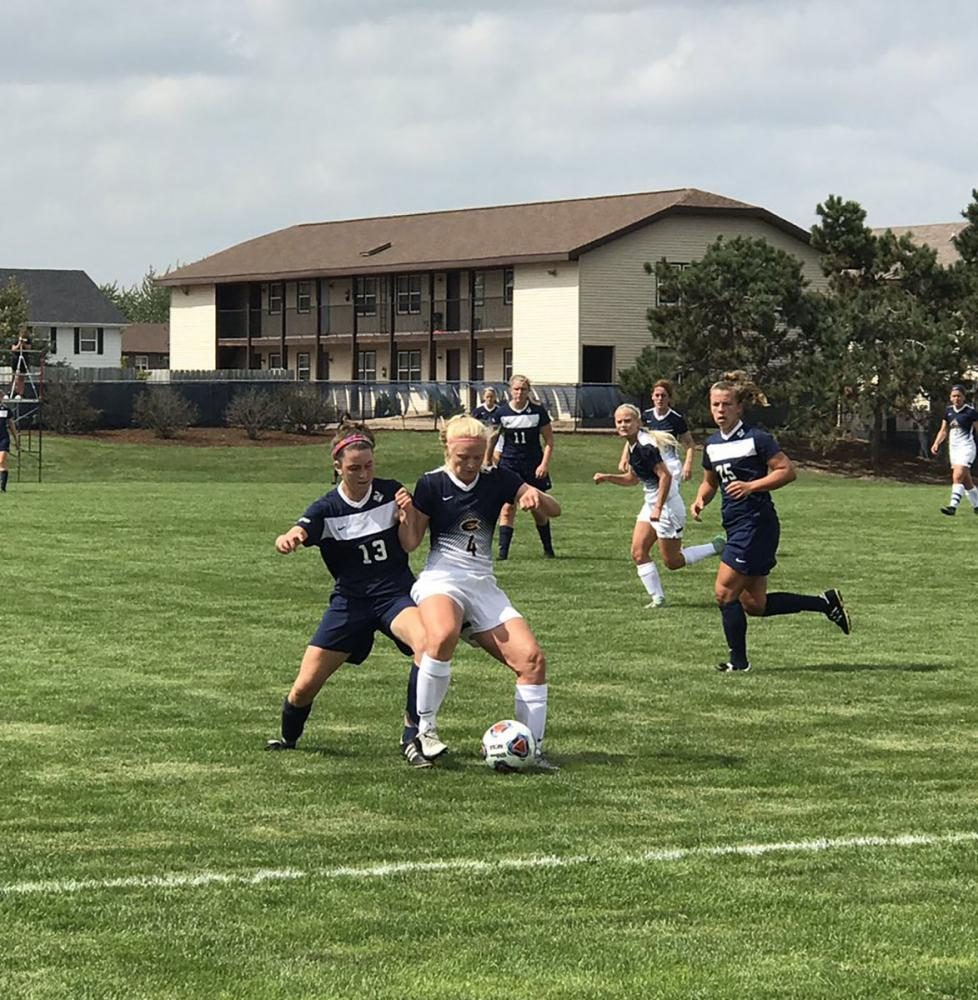 The UW-Eau Claire women’s soccer team started its season on Friday afternoon, losing to Carleton College 3-2 in a non-conference match.

The Blugolds looked to start the new season off with a victory and redeem themselves after last year’s upsetting loss in the semifinals of the WIAC Playoffs to UW-La Crosse. The Carleton Knights, however, did not oblige.

In just under ten minutes into the first half, the Knights scored two unassisted goals creating their two-point lead.

It wasn’t until 18 minutes into the game when the Blugolds struck back with a goal from junior midfield Monica Zoellner, putting the ball in the upper corner of the net, assisted by sophomore midfield Bailee Hyde.

Blugold fans rose out of their seats and cheered for Eau Claire’s first goal of the season, as they entered competition with a fresh score of 1-2.

The second half was a critical time for Eau Claire to catch up and get back on track.

“I thought that we definitely played a lot better the second half, once the first home game nerves settled down,” Hyde said. “We started to possess the ball more, causing us to control most of the second half and put two goals on the scoreboard.”

With just under ten minutes until the buzzer, the Blugolds found themselves with a free kick from under the side of the box just yards in front of the corner flag. Hyde again sent the ball in from the side where it curled into the back-corner post of the net to tie the game.

However, the Carleton Knights fought back and persevered to obtain a counter attack up the right side with just four minutes to go, ending the game with a score of 3-2 and providing a victory.

“For our first game I thought we played very well for the first season game,” senior goalie Sammie Lefaive said. “It’s always hard to know what to expect from the competition on the first game every year but I know that every one of my teammates were committed to giving it their all for those 90 minutes. Overall we dominated the field and never gave up, which is all I could ask for in a teammate.”

The women on the team said they’re looking forward to the rest of the season and have similar goals for how they want to continue it.

The team has gained quite a few freshmen this year so Hyde said her goal is for them to start to learn more about how the freshmen play and how the team as a whole can incorporate their skills into the program’s playing style.

Hyde said their defensive line is strong, so as offensive players, they need to begin to create scoring opportunities and put the ball in the back of the net.

The Blugolds will look to bounce back next week as they head to St. Paul for another non-conference match against Macalester College Tuesday at 7:30 p.m.