The Blugold's defense struggled to stop the Tommies from scoring 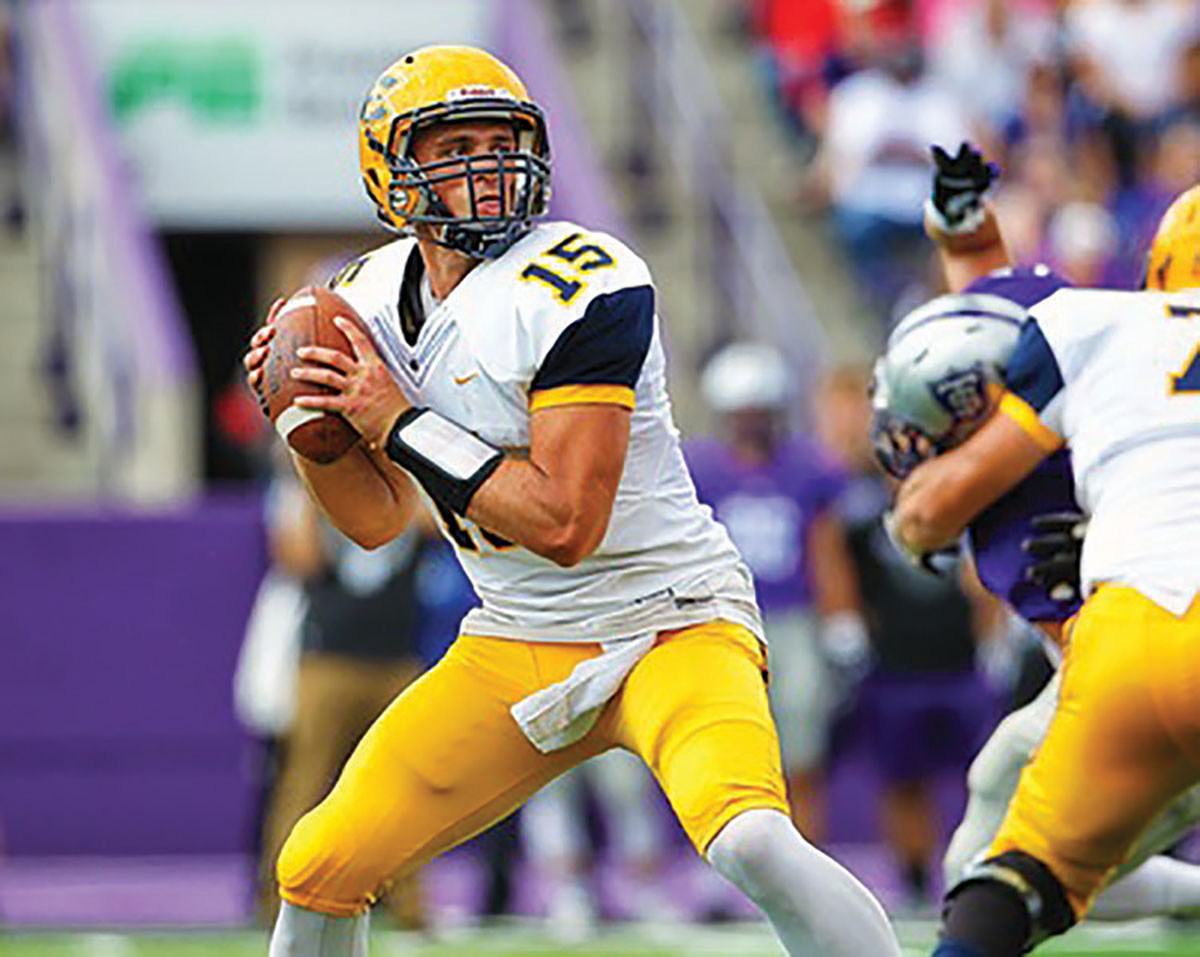 JT DenHartog scanned the defense for an open receiver in the season opener against St. Thomas this Saturday.

The Blugolds took a loss on the road  in their season opener this past Saturday against the No. 5 ranked St.Thomas Tommies with a final score of 47-13.

Junior quarterback JT DenHartog lead the way offensively, passing for 112 yards, including 68 yards on the ground and a touchdown. DenHartog lead off the game with a 65 yard run to take a 6-0 lead in the first quarter. However, this was the only lead the Blugolds had all afternoon, as the Tommies ended up scoring 21 unanswered points before halftime.

The second half provided limited improvement for the Blugolds as the Tommies scored an additional 26 points in the second half. Although DenHartog connected with junior wideout Leeshaun Evans for a 75-yard touchdown pass in the fourth quarter, their efforts couldn’t compete with the Tommies unstoppable offense.

DenHartog said he was disappointed by the outcome of the game, but was excited to get out on the field again.

Reflecting on the Blugolds’ overall performance, the offense was able to score on a handful of big plays. However, their efforts quickly burned out against the weight of the Tommies, struggling to get enough plays to the end zone.

Although the Blugolds gave up 47 points to a talented offense, the team did walk off the field with some defensive accomplishments. Eau Claire’s defense racked up four sacks against the Tommies. Junior Drew Hurley led the team with 11 tackles, tallying ahead juniors Cameron Swanson and Ross Curran, who tied with ten. In addition, juniors Sam Romanski and Darius Sims, as well as freshman Jalen Thomas all recorded sacks throughout the game. Senior Ryan Ames accomplished the Blugolds’ lone interception, snagging a pass in the fourth quarter.

DenHartog said he knew the Tommies would be tough competition, but he was encouraged by the game overall.

“We showed positives in some areas,” DenHartog said. “The scored showed otherwise, but we have to take the positives from those areas and build off them. We need to come out with confidence against every opponent and ultimately have some fun.”

Under the leadership of new Head Dan Coach Larson, the Blugolds will be looking to improve on their 2-8 record from last year.

This coming week, Eau Claire is hosting Wisconsin Lutheran on Saturday at Carson Park, where DenHartog said he and the Blugolds are looking to get their first victory of the season in front of the home crowd.

“We are very excited to be playing at home. It is always a great atmosphere,” DenHartog stated. “We are very fired up to get the victory.”