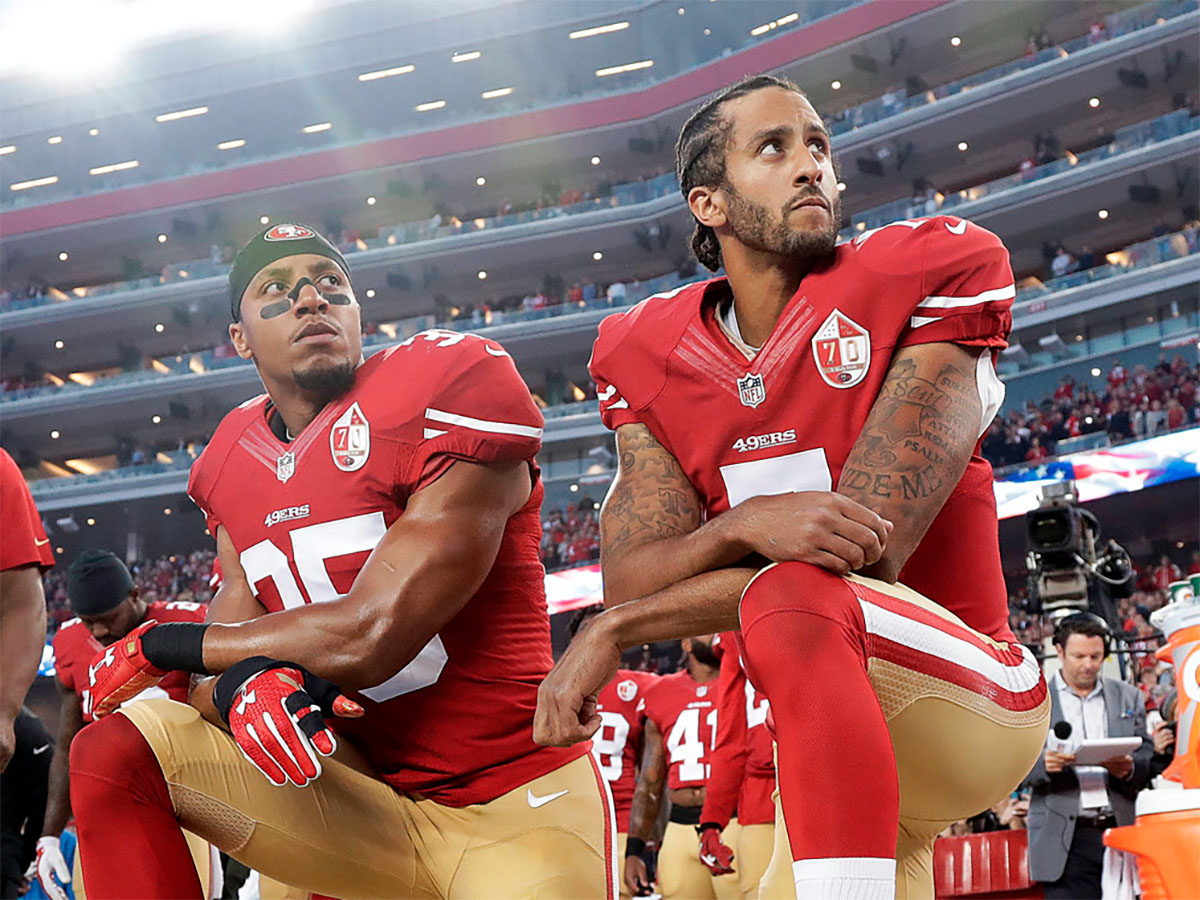 Colin Kaepernick kneeled during a preseason game in 2016, causing the debate of players using their platforms for political expression to stir.

Colin Kaepernick was drafted in the second round of the 2011 NFL draft by the San Francisco 49ers. In 2012, he even led the 49ers to the Super Bowl against the Baltimore Ravens. However, Kaepernick’s athletic success is no longer what has his name in headlines.

During the 49ers’ 2016 third preseason game, the national anthem began playing, as it does before each NFL game. As the camera swept over the athletes during the anthem, all were standing, except one — Kaepernick. He was kneeling as a protest against police brutality toward African-Americans.

“I am not going to stand up to show pride in a flag for a country that oppresses black people and people of color,” Kaepernick said to press following the game.

Flashing forward to 2017, he remains without a team as an undesirable free agent. Kaepernick continues to be vocal about the oppression of black people. He uses his status as an NFL quarterback to propel his voice despite harsh criticism saying he is wrong to use his position to make political statements, justifying the fall of his career.

Aaron Rodgers, the famed quarterback of the Green Bay Packers, recently spoke to ESPN, discussing his opinion on Kaepernick and the topic of athletes using their stardom as a pedestal for political statements.

Rodgers stated in the ESPN interview he would support all of his teammates and fellow players around the league in being vocal about what they believe in.

“I’m gonna stand because that’s the way I feel about the flag,” Rodgers said, “but I’m also 100 percent supportive of my teammates or any fellow players who are choosing not to.”

Rodgers also said he disagrees with the concept of Kaepernick’s actions impacting his athletic career.

“I think he should be on a roster right now,” Rodgers said. “I think because of his protests, he’s not.”

Kaepernick has not been the first athlete to use his athletic stature to expand his political views, and he certainly won’t be the last. Professional boxer Muhammed Ali was well known for backing out of the Vietnam draft, as it went against his Islamic religion.

According to an article by History News, when Ali refused to be drafted, he was not only put in prison for five years, but stripped of his heavyweight title and banned from boxing for five years.

Ali was ridiculed and shamed for not entering the draft. Although he was called a coward and a traitor to his country, he never stopped fighting for what he believed and never gave in to what others told him to do. Kaepernick may not have gone to the same extremes as Ali, but the principle was the same.

Those “celebrities” and famous athletes are no different than we are. They are in their positions because of their incredible skills, but they have the same rights as anyone else. We, as “average joes,” scatter our thoughts and opinions all over social media and have no problem with it.

The United States Constitution labels free speech as a right of all citizens, no matter who you are. You could be the teenage drive-thru worker at Mcdonald’s, a high school math teacher or even a professional football player. We all have freedom of speech. To say one can’t speak their opinion just because of their position of power would be stripping them of their rights.

Mocking the concept of athletes speaking out just because of their professional platforms would be hypocritical and naïve. We all have the same opportunity and should be given the liberty to speak and stand up for what we believe in, no matter who we are.