The Face Off: Does Adrian Peterson have anything left in the tank? 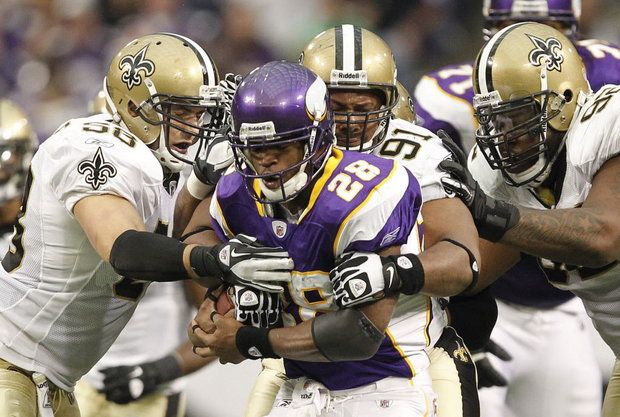 Adrian Peterson has been member of the Minnesota Vikings for his entire career before signing with the New Orleans Saints in the offseason.

This offseason, the Minnesota Vikings parted ways with Adrian Peterson, their running back and face of the franchise for the past 10 seasons. About a week ago, Peterson took his talents to New Orleans where the Saints signed him to a two-year, $7 million contract.

As Peterson continues to get up there in age (32), the question of if he has anything left in the tank to give to another team is a valid one, but also easy.

In case anyone forgot, Peterson has led the NFL in rushing yards since 2007 and led the league in season yardage just two years ago. When Peterson is healthy, he is arguably the league’s best and is capable of dominating a game at any point.

Peterson’s age can be concerning, especially at the running back position, but it’s not impossible for 30-year-old backs to succeed. Tiki Barber of the New York Giants rushed for an impressive 1,860 yards at 30 years old, then followed it up with a 1,662 yard season. John Riggins of the Washington Redskins rushed for more than 1,200 yards twice after the age of 33.

Another factor that will propel Peterson to another successful season in New Orleans is his projected workload. Mark Ingram will likely remain the starting running back for the Saints, leaving Peterson in a backup role.

Having fresher legs due to less carries and an improved offensive line sounds like a recipe for prosperity. Peterson will also be sharing the backfield with 2-time NFL Offensive Player of the Year in quarterback Drew Brees to take some of the attention from defenses off him.

Peterson is an athlete who rushed for 2,097 rushing yards in 2012, just eight months removed from an ACL and MCL tear, on his way to a league MVP.

If any player is going to beat the odds, whether it is injuries or age, it’s Adrian Peterson.

The expiration date for running backs is 27-28 years old. Adrian Peterson is beyond that.

It is common for many National Football League (NFL) running backs to experience their physical abilities diminish around the age of 27 or 28 due to the high amount of damage they experience over their career.

Peterson is 32. That is ancient in running back years. And even if he still had relatively fresh legs at 32, another factor is still hindering his ability to succeed: injuries.

Peterson has missed a significant number of games over the past four to five years due to serious injuries.

Injuries such as tearing his ACL, which is usually a death sentence for professional athletes. He also has not recovered well from these injuries, becoming less productive every season since his first major injury.

When the topic of if he can succeed on the Saints, my answer is no, and it seems the Saints also have realistic expectations of Peterson.

New Orleans only offered Peterson $3.5 million per year. In his prime, Peterson would warrant five times or more than that amount. This small investment in Peterson shows the organization willing to sign him knows his days are numbered.

The key word in that statement is “had.” Adrian Peterson’s career is over, and watching him slowly degrade before my eyes won’t be something I enjoy.