Losing twice over the weekend, Eau Claire’s 2017 season has come to a close 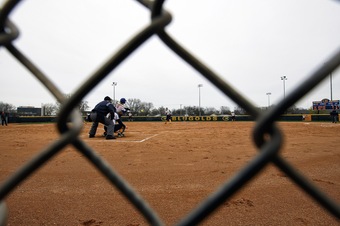 The Blugolds eight game winning streak, and their season, came to an end over the weekend.

With two losses over the weekend, the 2017 UW-Eau Claire women’s softball season has come to an abrupt end.

“We’re pretty disappointed,” Raffel said. “We had high hopes going into the season, because we had a team of seven strong seniors and a lot of returning experience. We were pretty confident in what we could do and it didn’t all add up in the end for us. But there is definitely hope for next year.”

The offensive output by the Blugolds was uncharacteristically low, considering they outscored their opponents 31-1 the previous weekend.

Raffel said the team wasn’t getting any breaks at the plate.

“I can’t say for sure what it was,” Raffel said. “For me, it felt like we were just hitting the ball right at people. It wasn’t that we weren’t making contact, we were just really unlucky with where the ball fell.”

Over the course of the season, the Blugolds racked up three winning streaks of three plus games, amassing an eight-game winning streak leading up to the WIAC Tournament over the weekend. The longest losing streak for the team was two games.

Despite the abrupt ending to the season, sophomore catcher Tayler Mort said she is still proud of how the team came together in their efforts to win a championship.

“The way we all worked together as a team was great,” Mort said. “There was no one who was only about themselves. It was everybody, or nobody at all. We wanted to get there as a team and everyone truly cared about that.”

Going into the offseason, the Blugolds will lose seven graduating seniors. These seniors include:

For an in-depth look at the 2017 softball regular season including statistics, game summaries and individual player statistics, visit the women’s softball page on blugolds.com.

Eau Claire will return to action next spring.