Women’s tennis proves two is better than one

The team dominated in doubles over the weekend against St. Norbert and UW-Green Bay 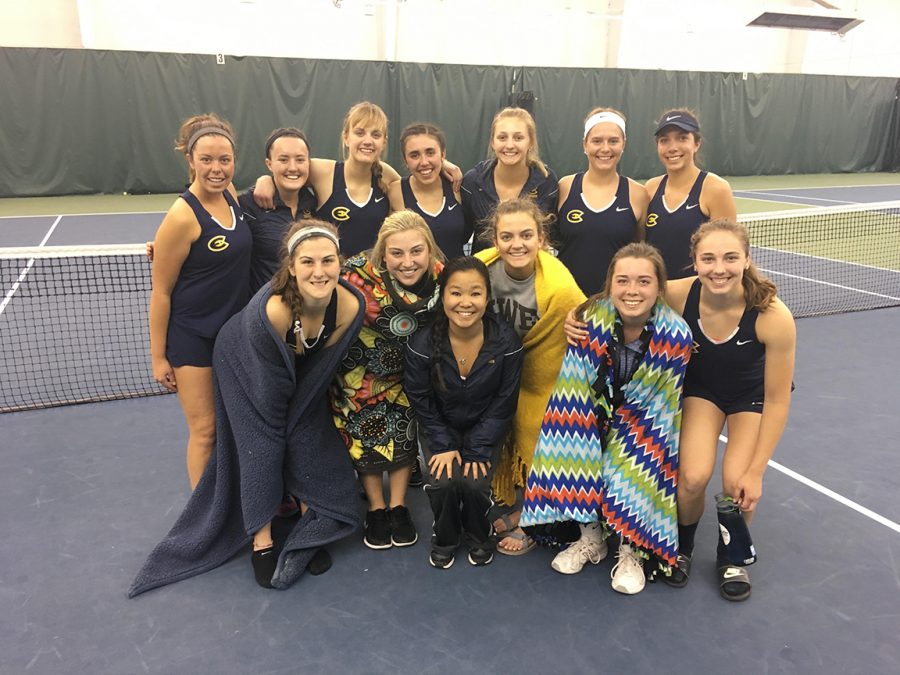 The team traveled over the weekend, bringing back an 8-1 win against St. Norbert and a 4-5 loss against Green Bay.

The UW-Eau Claire women’s tennis team hit the road this weekend, bringing back both a win and a loss to add to their now 11-6-1 record.

The Blugolds dominated Saturday’s match against St. Norbert with a score of 8-1, while falling just short of victory later that evening to Division I school UW-Green Bay at 4-5.

“We were kind of underdogs,” Henderson said. “We were not expected to win so to say but we came out and won two out of the three doubles right off the bat.”

The Blugolds held an impressive 2-1 lead against Green Bay before going into singles.

Henderson and doubles partner Natalie Wijesinghe swept the No. 1 spot in both the St. Norbert and Green Bay matches, earning scores of 8-3 and 7-6, respectively.

Eau Claire’s Molly Sanvik said the Blugolds started off strong in both matches.

“We came out right away in doubles for the most part,” Sanvik said. “We were ready to play.”

At St. Norbert, Eau Claire doubles partners Olivia Gallagher and Molly Stewart claimed a 9-8 win at the No. 2 spot while teammates Brooke Volpone and Hannah Zevenbergen secured the third and final doubles round with an 8-2 victory.

Later that evening, Volpone and Zevenbergen came out on top again in a nail-biter against Green Bay’s Noel Peck and Maria Neff with a 7-5 win.

Henderson said the duo was down 3-5 going into a match point—meaning Green Bay needed one point to win—but bounced back and beat them the next four games to win the match.

“They just kept fighting and kept playing every point and having a good mental attitude,” she said. “I think that’s a big takeaway from this, like hey we never should stop even if we think the match is over … because you can come back.”

Although the Blugolds excelled in doubles on Saturday, they found success in singles as well.

Eau Claire won five out of six of the total matches in the singles competition against St. Norbert, losing only in the No. 2 slot.

Against Green Bay, Gallagher and Sanvik took wins at the No. 4 and No. 6 spots, respectively.

Gallagher, a senior, battled it out against Neff until she won the third, tiebreaker set. As an experienced member on the team, she has learned to let loose and leave it all out on the court.

“I’m going to hit my shots with confidence and just go for it because there’s nothing to lose,” Gallagher said.

Sanvik said the competition was tough against Green Bay but she is thankful for the challenge and the opportunity to grow.

“It was good for us to get pushed a little bit,” she said. “They made us work for every point.”

A big takeaway from Saturday was knowing that they can compete with strong teams, Sanvik said.

The Blugolds will keep this in mind as they will face St. Scholastica — whose overall season record is 13-4 — at 3 p.m. on Wednesday, April 12 at the McPhee Courts.