Where to draw the line between players’ professional and personal lives

In an era where players are constantly losing their jobs due personal issues, the question of organization ethics must be raised 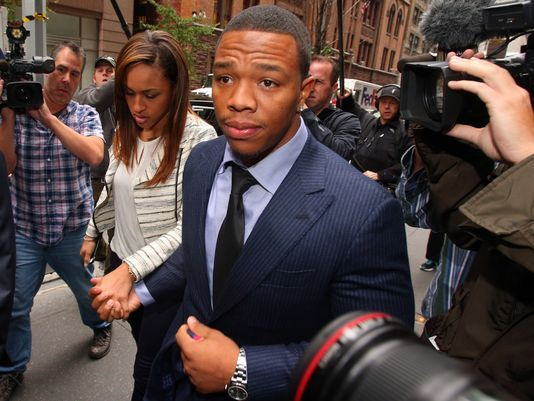 Ray Rice is one of the most prominent examples of a professional athlete’s off-the-field issues costing him or her their job.

A professional athlete can be a model competitor on the field, but off of the field, it seems they can be everything but a model citizen.

In 2014, Ray Rice, running back of the Baltimore Ravens in the National Football League (NFL), was recorded via surveillance camera striking his ex-fiancé in the face. Rice then opted to drag her by the legs out of an elevator, and Rice was suspended by the NFL and released promptly by the Ravens.

In a similar case from 2014, it was revealed that Adrian Peterson, running back of the NFL’s Minnesota Vikings, struck his son in what Peterson referred to as “discipline.” In this case, Peterson agreed to a plea deal and served a suspension enforced by the Vikings.

These are just a few cases that portray professional athletes paying a significant financial and professional price if they have issues off of the playing field. There are two prevalent, identifiable reasons for the frequency of this occurrence.

The first is it is a public relations nightmare for the organization. When a player is displayed in a bad light, that light is then angled toward the team and organization as a whole, reflecting poorly on them as well.

When this occurs, organizations are quick to react and opt to suspend and/or fine the player at the risk of fan backlash being attached to it. This is even worse when the face of the organization is attached to the controversy, as that reflects even more negatively on the team, seeing as they are the player’s employer.

The second reason for players being let go due to off-the-field issues is it makes them appear less reliable. When a player shows they aren’t responsible off the field, it becomes evident they aren’t far from starting to miss games or practices or fulfilling their responsibilities on the team.

These organizations are very tight with their money, taking few risky moves. They, naturally, want to protect their investments.

However, this raises the question of whether or not the team should be allowed to release a player based on their mistakes off the field. I don’t believe this to be a black or white question.

I believe a player should be dealt with based on the seriousness of his or her actions.

For example, if a player receives a ticket for an arbitrary matter such as speeding, jaywalking, a singular DUI or some other misdemeanor crime, the organization should not be able to punish that player after the fact.

These are things that occur in many people’s lives at some point, so firing someone from a job based on this is unethical. On the other hand, a serious off-the-field issue should determine their employment in the organization.

Murder, assault, theft, arson and a plethora of other violent crimes should result in suspension or outright release for a player. These violations of the law indicate the player is not capable of thinking critically about their actions, and therefore they cannot think critically on the field of play.

Being that both Rice and Peterson’s actions fall under this criteria, I believe that their punishment both by the league and the court of law was justified.

A problem that arises from having to make this desertion is one that many fans, players and team owners are referring to as “the gray area.” And unfortunately, that gray area is one that most likely won’t go anywhere soon.

Without the professional sports leagues, and possibly individual franchises, drafting legislation and/or clear guidelines pertaining to offences that can lead to suspension/release, this problem will remain a subjective one.

Professional athletes should be allowed to be released or suspended due to their off-the-field issues. Those issues are one of the contributing factors to an organization knowing who they are employing and is an indicator to a future franchise of that person’s ability to be successful in the future.

Fans and teams alike need to be able to discern between serious and non-threatening crimes if this gray area is to be eliminated anytime soon.