Blugolds continue to improve their play as the spring season continues 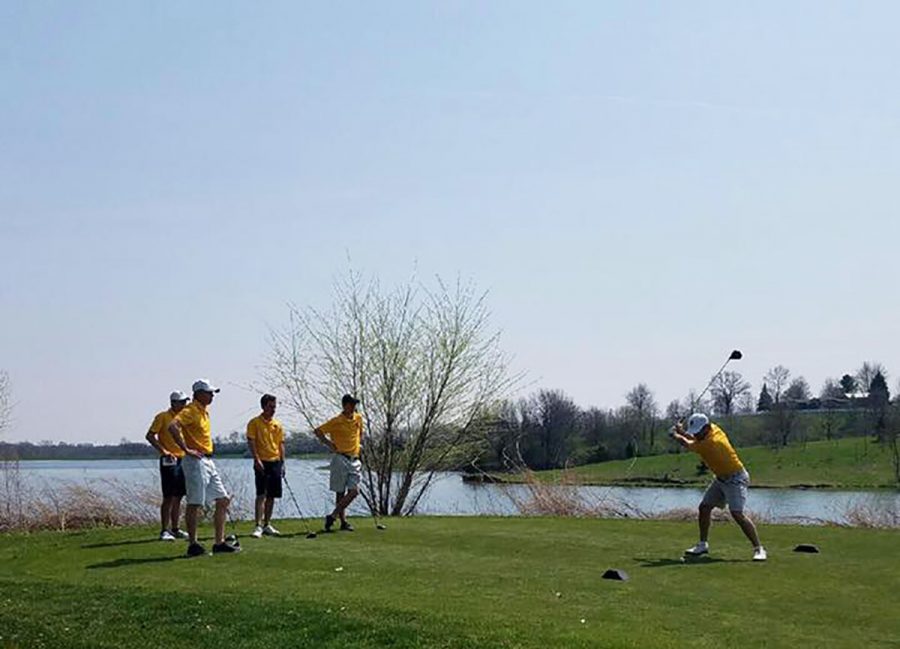 Blugolds prepared to compete in the Augustana Invitational both Friday and Saturday, placing fourth overall.

The tournament at Fyre Lake Golf Club in Sherrad, Illinois consisted of 22 schools, each with teams of five golfers competing.

Blugolds overall took third place in round one, while Hanson jumped to the lead of all players in the tournament.

Hanson shot a 68 on Friday to earn the top spot on the leaderboard, and the rest of the team played steadily behind him.

“Brady played phenomenal this weekend,” Greer said. “Tee to green he was better than anyone in the field. Brady has a great mental game, and as good of an attitude on the course as I’ve seen.  He leads by example everyday and pushes his teammates to get better.”

Isaacson followed with a 74 to tie for 14th place, while Drier and Rogan tallied a 75 to tie for 22nd place. Johnson also turned in a score of 76 to tie for 27th.

The team was off to a great start in round one, shooting a solid score of 292, only three shots off the lead.

“I think the team performed very well regarding their attitude, focus and course management during the tournament rounds,” Greer said.

In round two on Saturday, the team faced tougher conditions with the wind blowing over 20 mph, but that didn’t seem to stop the Blugolds from playing to the best of their ability.

Eau Claire finished Saturday’s round with a team score of 305, bringing their final team total of the entire weekend to 597. Illinois’ Weleyan won the tournament with a score of 576.

“If there was one area we could improve on — and always can — it’s putting,” Greer said.  “If each player holes one or two more putts a round, that can be the difference between winning a tournament or placing second.  We are confident we know what we need to work on, and the Blugolds will be ready to go next weekend at Gustavus.”

Dreier led the way in round two with a solid round of 73, just missing the top 10 overall, bringing this two-round total to 148 to tie for 11th place.

In regard to how the team could improve, Dreier said it had a lot to do with mentality.

“As a team we have to be mentally stronger and play fearless. Individually, I need to have the fearless mentality from the first shot of the day to holding the last putt on 18.” Dreier said.

Hanson followed behind Dreier by shooting a 75 on day two to finish the weekend with a score of 143, placing him in second individually overall.

Behind him was Isaacson with a 77 to finish the weekend with a 151 to tie for 17th place. Johnson finished in a tie for 31th place after tallying an 80 and a 156 overall, while Rogan tied for 36th with an 82 on Saturday, bringing his total score to 157.

The Blugolds will be back in action Sunday, April 23 where they will compete at the Bobby Krig Invitational.

Coach Creer said the team’s mindset this spring is to play without expectations.

“In golf, going to the first tee with expectations to perform can negatively affect us. We are trying to play free and have fun, which produced the best golf,” Greer said.

Dreier’s expectations for the rest of the season stays the same as it has all year, he said.

“Stay in the present,” Dreier said,  “make the picture small and most importantly, have fun.”