The Faceoff: Should professional athletes be required to attend college?

Two members of The Spectator debate on the controversial topic 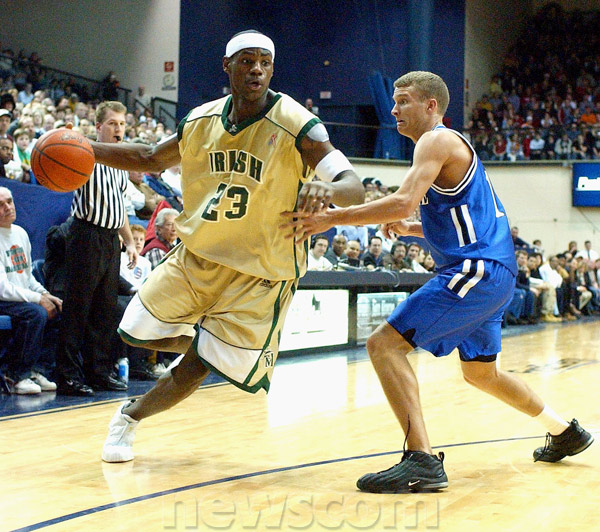 Lebron James is one of many NBA players who opted to declare for the NBA draft after high school instead of attending college.

Professional athletes should be required to attend at least one year without question.

The main reason for this is high school athletes are not emotionally ready to make the jump right to the pros.

Eighteen-year-old men and women are not ready to handle themselves independently, make a professional living and, all too often, high school programs don’t offer an atmosphere that can compare to college or the pros on any level.

These athletes are often emotionally not mature yet, and that can manifest itself in a bad way in a professional organization.

If athletes are allowed to declare early on in their lives for the pros, that puts them in a tough position.

Unless the athlete is the next Lebron James or Kobe Bryant, most likely the athlete will ride the bench for at least a year or two and they will not develop as quickly as a player.

On top of that, with this new-found wealth and fame, an athlete coming straight out of high school is more prone to act out and get into trouble off of the playing field (and possibly hinder their ability to succeed).

College offers athletes a chance to prove themselves from a maturity standpoint as well as on the field of play. The ability to manage time and resources is a skill that college teaches student athletes and will help the player make the transition to the pros more easily.

The National Basketball Association (NBA) and the National Football League (NFL) are becoming the trailblazers for the movement to require universal college requirement in order to declare for the pros.

Unless we want to expose high school graduates to the harsh real world realities that the pros bring too early, then at least a required year or two of college to declare for the pros is the way to go.

At face value, it doesn’t make sense to throw high school kids into the pros.

No matter how talented these athletes are, they’re immature and not accustomed to primetime. We’re talking about individuals who will make executive-level money from the moment they step into the arena. Some will be paid like Fortune 500 CEO’s, essentially for playing a game for a third of the year. Why not give them a couple years to prove themselves? Their time will come.

But, the simple fact of the matter is that we rarely give sports like football or basketball credit for how brutal and demanding they are.

According to the NFL Players Association, the average NFL career only lasts about 3.3 years. Studies indicate the average NBA career is roughly twice that. The vast majority of athletes aren’t going to be paid like a Pro-Bowler or All-Stars.

To put it plainly, the chances than an athlete will enter their fifties with permanent and debilitating injuries are astronomically higher than their chances to achieve the kind of superstar lifestyle men like Tom Brady or LeBron James enjoy.

Still, there are droves of kids who aspire to be professional athletes, and they won’t be dissuaded, no matter how many cautionary tales are thrown their way. The NBA and the NFL treat the college level as their equivalent to the minor leagues in baseball: a means to foster, evaluate and weed out talent. However, unlike the MLB’s minor leagues, college athletes are not compensated.

Between 2011-2012 alone, the Alabama Crimson Tide football program spent over $36 million and accrued nearly $82 million in revenue — but the heart and soul of the program, the student athletes, didn’t see a dime. These football players work and sacrifice their bodies in a way that profits their universities millions, yet they’re treated little better than indentured servants as a reward.

For all but the luckiest few, the world of sports is a brutal and unforgiving one. For every happy ending there are a hundred sob stories. Requiring athletes to spend a year or two in the college ranks wastes  some of their prime years, especially for those who play physically demanding positions, such as running back. For others, their careers will end before they have a chance to begin, as quickly as it takes to tear ligaments or crush a spinal cord.

Instead of taking advantage of college kids — as the NCAA  is an organization that perpetuates these kinds of abuses— athletes should get back what they put in, even if it’s for only a fleeting moment in the limelight.