Running into the new season 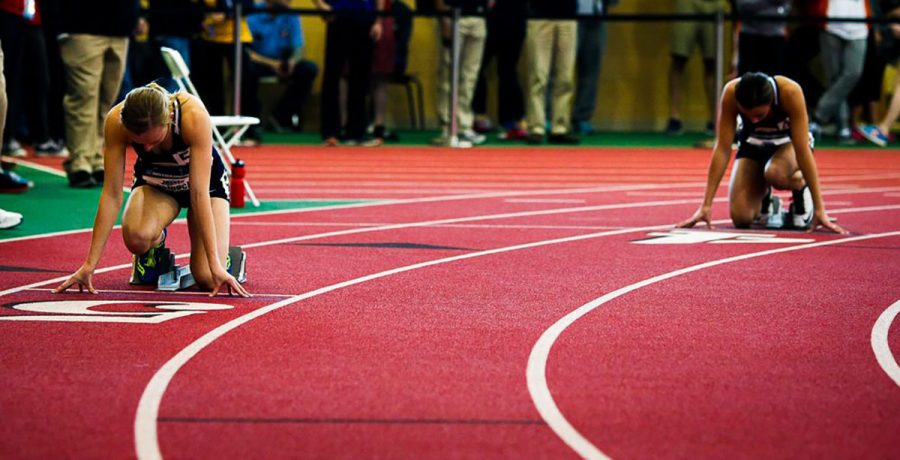 Blugold seniors Jessie Reineck and Jessica Rupnow prepare for their event in a past outdoor track and field season.

As the indoor track and field season comes to a close, the Blugold men and women’s teams are ready for the outdoor competition season to begin this Saturday in La Crosse.

Chip Schneider, head coach for both the men and women’s track teams,  said he is looking forward to the outdoor season because it is the highlight of the year.

“The goal for our teams has gotten to the point where we are hoping to be in the top four teams in the nation for both men and women,” Schneider said. “To be top four, you get to bring home a trophy from nationals, but in order to do so, things have to go right. We have to stay healthy and get to the end of the season still feeling good about where we are at.”

During last year’s outdoor season, the men’s team had a great deal of strength in the distance program, which Schneider said would most likely remain strong in this upcoming season.

Schneider also said he is looking forward to both the men’s 5k and 10k events with strengths from senior Nick Petersson and junior Darin Lau, who performed well during the indoor season.

Hunter Henk, a freshman marketing student, typically runs the 400-meter dash as an event and is excited to begin his first outdoor season as a Blugold.

“This season should be pretty fun because we have a great coach to follow,” Henk said. “It should be interesting too because we are in such a good conference that we race against really good people every time so you always have that huge competition.”

For the women’s team, Schneider said he is particularly excited and looking forward to the quarter miles with seniors Jessica Rupnow and Sarah Gidden as well as the discus event with sophomore Erica Oawster and junior JoHannah Theisen.

Rupnow, a biology student, is a long sprinter that typically runs the 200-meter, 400-meter and relays. As a senior on the team, she said she has the opportunity to meet and run alongside many different individuals.

“My expectation for our team is no different than expectations of years past,” Rupnow said. “An end goal is important and very exciting but our team knows how important the little things are in order to create opportunity for the big things to happen, such as bringing home trophies and national titles on both the men’s and women’s side.”

Hoping the team is coming out of the indoor season with enough sustainability and practice, Schneider said the team will open well this Saturday at their first outdoor meet of the year.

Although the team feels prepared to start the new season, members always find room to better themselves and the team.

“As a team I think we are definitely headed in the right direction and hope to use our indoor season as a platform for outdoor. As long as we stay healthy, strong and fast, I have no doubt this outdoor season will be one to remember,” Rupnow said.

Blugolds compete in the Ashton May Invite at 11:00 a.m. Saturday in Lacrosse.

“This has been one of the easiest teams I have ever coached, meaning there haven’t been a lot of distractions within our team and the team gets along really well,” Schneider said. “Even if we don’t end up in top four teams in the nation, which I hope we do, it will still be a really good season just based on how the kids go about their work and how they treat each other and the coaching staff. It has been a really good year to this point.”