Men’s tennis dominates on the road 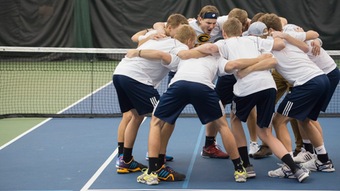 The men’s tennis team took down both opponents on the road this weekend, keeping alive their three-time consecutive winning streak for the month of April.

The UW-Eau Claire men’s tennis team took down two different opponents on the road this past weekend, keeping alive a current winning streak (3-0) for the month of April. The Blugolds beat No. 17 ranked Carthage College on Friday with a final score of 6-3, and dominated Hamline University the following day, finishing the dual with a score of 8-1.

Head coach Tom Gillman said he is happy with his team’s performance.

“It was a physical test to be on the road and be traveling,” Gillman said. “They did a great job bouncing back, and battled through a tough schedule. I feel like they can handle anything.”

On Friday, Eau Claire made their first victory appearance on Carthage’s home court in Racine, Wisconsin. The Blugolds started off strong, earning two victories in the doubles competition. Partners Will Weyenberg and Daniel Schoen won a battle against Carthage’s team of Jaworski and Curry 8-6 in their No. 2 slot.

In addition, Conrad Felten and partner Zach Janssen came out victorious in their match with a score of 8-4 in the No. 3 spot.

In the singles competition, the Blugolds continued their winning fashion. Janssen took down his opponent 6-0, 6-3 in the No. 3 spot, while Renan Barros won his match 6-2, 6-0 in the No. 4 spot. Teammates Weyenberg and Felten also earned single-handed victories, coming out on top in the No. 5 and No. 6 slots respectively.

Michael Mauthe, a senior tennis player as well as ecology and environmental biology student, said that despite a tough matchup against Carthage, he was proud of his team for overcoming various obstacles and getting the win.

“The depth of our lineup shined as we were playing Carthage, a team that is a challenge for us year after year,” Mauthe said. “I think we all learned from this challenge that even though we experience injuries, illnesses or other setbacks, we have the ability to overcome adversity through teamwork.”

After their first road victory of the weekend, the Blugolds packed their bags and headed to St. Paul for a dual against Hamline. Eau Claire once again began the competition with a sweep in doubles, earning victories in the top three slots.

In the No. 1 spot, Blugolds’ Mauthe and Andrew Dahl came out on top, defeating Hamline’s Matt Seracki and David Yanagita 8-5. Moving on to the No. 2 spot, partners Weyenberg and Schoen once again provided a winning partnership, dominating their opponents 8-1. Lastly, Janssen and Felten took down the competition in their No. 3 slot for the second time this weekend with a final score of 9-7.

Eau Claire’s lead continued on into the singles competition, taking down the top three slots yet again. Mauthe earned an additional victory in a No. 1 slot with scores of 6-0 and 6-1. Schoen also continued his winning streak, dominating the No. 2 spot 6-2, 6-1. Next, Dahl finished the sweep in the No. 3 spot with scores of 6-0, 6-3. Weyenburg and August Badura solidified the Blugolds’ Saturday victory, winning the No. 5 and No. 6 spots, respectively.

Mauthe said the team’s goals focus on overall effort rather than championships.

“We strive for excellence by working as hard we can for each and every point,” Mauthe said. “If we’ve done that, even if we aren’t victorious, we’ve achieved our goal.”
The Blugolds wrapped up the weekend with an improved overall record of 14-5. Their next competition will take place at home on April 12 against St. Scholastica.