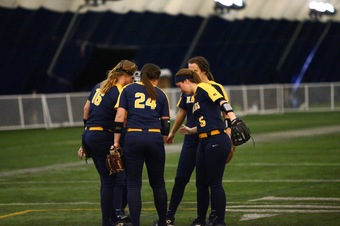 The Blugolds left Florida with 11 victories and only one loss over break.

The UW-Eau Claire women’s softball team traveled south for a series of games in the sunshine state of Florida over spring break, walking away with an impressive bundle of victories. The Blugolds conquered every team in their first series, and fell to only one team in their second series.

“We have really been focusing on the idea that if we don’t get there together, we don’t get there at all and I feel like that was a major contributing factor to the success we had over the trip,” Varian said. “It’s difficult for me to think of really any moments that there wasn’t a lot of chatter and cheering exploding out of the dugout.”

The competition began in Kissimmee, Fla. as the Blugolds played their first two games on March 16 in the Rebel Games. Franklin and Marshall met their match, taking a loss against Eau Claire 1-0. Senior pitcher Lauren Blasczyk stood out on the field, keeping the Diplomats to only three hits, striking out six, and allowing not a single walk. In the second game of the day, the Blugolds took down local competitor Carroll College 8-4. Eau Claire began the game with an early lead, earning the first seven runs of the game in the first inning, and one additional run in the second.

Although there were no further scoring advances in the game, freshman pitcher Sarah Peka held the Pioneers to only 4 runs in her debut performance on the rubber, striking out three and walking none.

Day two of competition kept the victory streak alive for the Blugolds. Eau Claire’s morning game resulted in a 3-2 victory over the Illinois Wesleyan Titans, a nationally ranked pitching team. After a 1-0 lead in the first four innings, the Titans surfaced with a 2-1 lead at the bottom of the fifth. However, senior Evie Schaller tied the game with a solo shot in the top of the sixth, and senior Kelsey Meredith’s hit was the game winner in the seventh inning. In the day’s second game, Eau Claire secured an 8-3 victory against the Marietta College Pioneers.

Standout hitters in the game include senior Emily Pomykalski, junior Carlie Christensen, and senior Sam Noetzelman, all of whom went two for three at bat.

One day later, the Blugolds engaged in a grand finale appearance at the Rebel Games, dominating their final two competitors and forcing the mercy rule on both teams. Eau Claire towered over Farmingdale State, winning the match 10-0.

Ten different Blugolds accounted for the 11 hit game, with senior Leah Wolff earning two base hits. Eau Claire then took down Washington and Jefferson for their final competition in Kissimmee, securing a score 12-0. Peka once again stepped up at the pitch, providing three shutout innings, followed by freshman Stephanie Wilczynski who allowed only one hit in two innings.

Following a victory stretch in Kissimmee, the Blugolds traveled onward to Clermont to compete in the PFX Games.

In their first game on the fresh playing field, Eau Claire faced their first spring break loss to Hope College, finishing the game 3-2. With senior Rachel Heffel on base, Varian scored a homerun in the first inning to start the game off with a 2-0 lead. But, the Blugolds lost hold in the bottom of the sixth and were unable to come out on top. The second game of the day held more promise as Eau Claire beat Bowdoin College 8-7. Christensen, Schaller, and Wolff all had multiple hits that contributed to the victory.

The next day at the PFX games, Eau Claire returned to their winning streak, taking down both teams on their radar. The day began with a 4-2 victory over the University of Chicago. All the action was packed into the first two innings of the game as Varian contributed two of the four base hits.

In the second game, the Blugolds came out on top of Carthage College in a 7-1 battle. The game was full of stellar pitching performances, with several no hit innings from Peka and Blasczyk. Pomykalski was a standout hitter for the team, with a two for three performance that improved her overall batting average to .353.

Eau Claire closed their spring break in sunshine with two final victories. The Blugolds took down Thomas College in a blowout result of 12-1. Freshman Cheyenne Johnson and Wilczynski held a strong pitching presence, while the team’s offense was walked a total of ten times. Heffel, sophomore Taylor Mort, and junior Darby Raffel scored the majority of the team’s runs. Eau Claire’s last game ended in a 9-4 win over the College of Wooster. Noetzelman contributed three hits, while Varian scored yet another home run, resulting in a three run shot to provide the team’s final lead.

Noetzelman, a kinesiology human performance student said she feels her team’s success can be attributed to the versatility of her teammates.

“All 21 players on our team played throughout the week in various roles, so we didn’t have to rely on certain players the entire trip,” Noetzelman said. “I think that is what is special about our team is we have depth in every aspect of our game that allowed us to be as successful as we were.”
The Blugolds finished their trip with an 11-1 record in the spring break series, and a 14-2 record for the overall season. Their next game series is set to occur in Iowa, March 31-April 1.