The faceoff: Should sports be viewed live or on television?

Two staff members debate their side of the topic 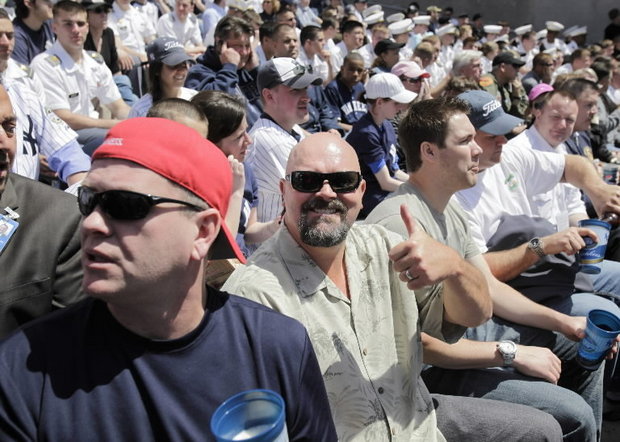 Which is the better option, watching a sport live or on television?

Many sports fans argue there is no better way to watch a game than in person. However, this statement could not be further from the truth.

Ticketmaster is charging between $780 and $14,325 a seat for the upcoming NCAA final four games in Phoenix, Arizona.

And let’s not forget about parking fees and overpriced concession costs.

Although witnessing the sport in action might be more exhilarating, is it really worth the price?

These costs are by no means restricted to the financial department, either.

Most people don’t get the best seats in the stadium, and therefore run the risk of poor visibility, being surrounded by loud, irritating and often intoxicated crowd members, or needing binoculars to watch the action while simultaneously tending to their nosebleeds.

Watching the sport on television provides spectators with the best angles, information and replays — and it doesn’t cost a dime, aside from the cable bill you pay, anyway.

Additionally, there is no need to worry about uncomfortable weather situations such as snow, rain, sleet or — perhaps worst of all — the heat.

According to an article by the Huffington Post, temperatures at Turner Field in Atlanta approached 120 degrees in late June of 2014. The pitcher for the Washington Nationals was unable to continue and had to hit the showers after the third inning.

The spectators for that game, however, had no such showers or opportunity for relief.

Indeed, watching sports on television saves time, money, and — with today’s media coverage — provides better, closer views than a seat in the stands.

Don’t subject yourself to overpriced discomfort; sit back in your recliner and enjoy the game.

Don’t get me wrong — there’s definitely something comforting about staying home and lounging on the couch to watch a sporting event on television.

But let’s be honest — yelling at the TV and awkwardly jumping up and down in your living room because your team just scored a touchdown is not nearly as satisfying as being able to “superfan” and go all out at the stadium.

At live games, you are surrounded by hundreds of fans with incredibly high team spirit, cheering and shouting chants to encourage the team you all came to support.

Being a part of the stands at a live game is an event in itself.

Sports bring people together. These games are a great way for the general public to settle their differences. Everyone walks into the stadium wearing the same colors and have uniform excited and motivated expressions spread across their faces.

Yes, viewing parties for sporting events in friends’ living rooms may have food, but there is something about tailgating in the stadium parking lot that just adds to the whole experience.

Hot dogs rolled right off the grill, bean bag toss being played off to the side and everyone listening to the perfect pregame playlist is fan bliss.

Even if you don’t have the closest seats, you can still be a part of an event with limitless energy and team spirit.

The ticket you bought can be saved as a great souvenir or memento. Not to mention, you will have supreme bragging rights because everyone watching the game on TV secretly wished they were there.

After a big play that just happened during the game, we have all heard people watching on TV say something along the lines of, “Oh, man. I wish I was there to see this live!”

Some arguments as to why people should just stay home to watch the game claim the seating at the stadiums is uncomfortable.

And to that, I would like to point out you don’t typically attend sporting events to sit down in a comfortable seat. A majority of the time, you are up on your feet, jumping up and down and getting so into the game you forget you there was a even a seat available … at least that’s how it should be.

It’s time to get out of the house, turn off the TV, head down to the stadium and enjoy a once-in-a-lifetime opportunity filled with team spirit, excitement and adrenaline. No game is the same, so go out and experience it in real life.