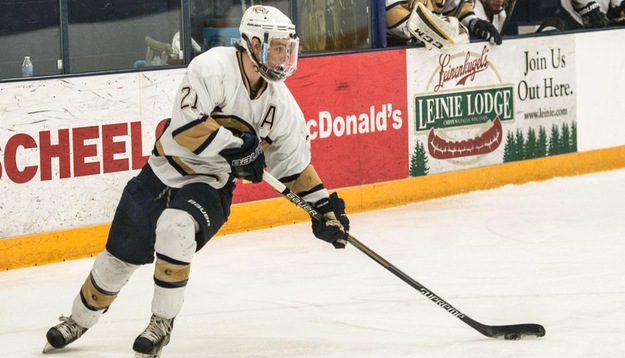 Eau Claire’s hopes for another national collegiate hockey championship will have to wait at least one more year.

UW-Eau Claire men’s hockey fell to UW-Stevens Point Saturday in Stevens Point in the Wisconsin Intercollegiate Athletic Conference (WIAC) championship game, 3-2. Due to losing the WIAC in both the regular season and the playoffs, Eau Claire’s season has now come to a close.

The Blugolds ended their season with an overall record of 18-7-3 and 5-3 in WIAC play.

The achilles heel for Eau Claire against Stevens Point in all three of their matchups against each other has been letting Stevens Point get out to an early lead. Saturday did nothing but reaffirm this.

At 15:29 into the second period, Pointer player Ethan Strong lifted a puck past Eau Claire goalie Jay Deo on a goal assisted by Lawrence Cornellier and Jacob Barber. Despite Blugold Lucas Kohls evening things up about a minute later, Stevens Point would dominate the final period.

Scoring two goals before Eau Claire could muster one, the Pointers outlasted the Blugolds and ended their season prematurely.

Sophomore defensemen Tyler Hart said the team will be looking for more out of next season comes when it comes around.

“I thought overall it was a pretty good season,” Hart said. “Obviously the record shows, but we are never satisfied and we are going to want a lot more next year.”

The loss against Stevens Point comes after Eau Claire dominated River Falls at Hobbs Ice Arena in Eau Claire last weekend in a two-game semifinal miniseries. Hart said the victories were definitely the “highlight” of the season for the roster as a whole.

Eau Claire has ended their season early in the playoffs the past couple of seasons, but Hart said the team’s future is in good standing.

“I think it is very bright, especially with all of the freshmen we brought in this year,” Hart said. “We are going to have to fill some holes though due to all of the seniors graduating. Patrick (Moore), Adam (Knochenmus), Jason (Eddy), Bryan (Sinz) and obviously Jay (Deo), who is our goalie. We have some new recruits we are looking at as well, so I’m excited for it.”

Junior forward Mac Jansen said the team’s struggles started to become apparent in the second half of the season.

“We started off hot before the Christmas break,” Jansen said. “We went out on an eight-game win streak. That was something we really wanted to build on in the second half. However our strength of schedule increased in the second half playing a lot of WIAC schools, and obviously we struggled. It is something for the returning guys to look at and use to our advantage next year.”

Now that the regular season is over, the training and preparation begins for the team. Offseason lifting sessions will begin in a few months, and the coaching staff will be recruiting heavily to try to attract additional talent to the Eau Claire roster.

The Blugolds will spend the remainder of this week sending off their graduating seniors. Jansen said the team greatly appreciates the support from its fans.

“We appreciate all of our fans’ support this year,” Jansen said. “We had some nights at Hobbs where it was a full house, and that is something we really look forward to. We hope everyone comes down next year and helps us in our pursuit of a National Championship.”

Blugold men’s hockey 2017-18 regular season games will be available for viewing on blugolds.com and can heard live on Blugold Radio 99.9FM-WDRK starting in October.