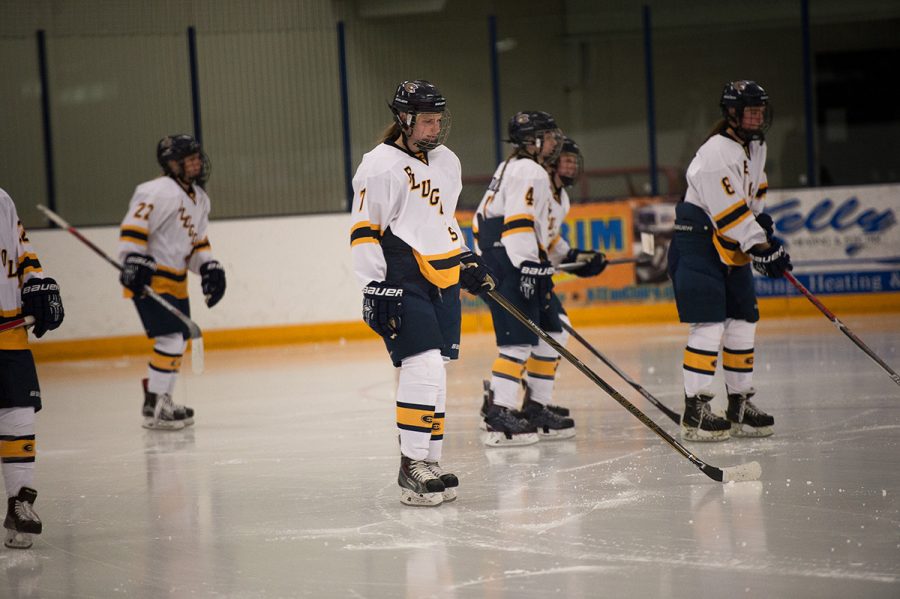 The Blugolds will take this ice twice this weekend in hopes of progressing past the semifinals.

This weekend, the UW-Eau Claire women’s hockey team will face UW-Stevens Point in the WIAC semifinals. On Eau Claire’s home ice, the two opponents will compete for the W both Friday and Saturday afternoons for a chance to make it to the finals.

Previously this season, Stevens Point took the win away from Eau Claire twice, but in the most recent game, on Feb. 4., Eau Claire came out on top with a final score of 4-3. Head coach, Eric Strand, said he is most looking forward to the rivalry that will be found within this weekend’s matches. Experience has shown him Stevens Point is a very worthy opponent.

“What makes Saturday’s game so tough to win is you’re literally not only playing a team, but you’re playing a team’s heart,” Strand said, “and as we found out, Stevens Point has a lot of it. But I know we do too.”

Currently, the Pointers’ record is 13-10-2. While he said Coach Ann (Stevens Point) does a phenomenal job with her team, he said he’d be shocked if one team “runs away with it” because of how hard both teams have worked this season. He said he expects the series to come down to a little bit of puck luck.

The Blugolds lie at 16-8-1, which broke the program record for wins in a season by one.

Strand said he knows these games are going to be challenging, so his team hopes to win Friday’s game to keep Stevens Point on their toes for Saturday.

In the week prior to the playoff games, Strand said the team would work on a few specific areas.

“For us, it’s not a lot of leaps and bounds we need to improve on before we take the ice against Stevens Point,” Strand said. “We’ve got some minor things that we need to work on … and that’s the exciting thing. If we improve on the areas we’ve been working on this week, this team (Eau Claire) is going to be a tough team to beat.”

Senior forward, Emma Silkey, said the games this weekend will come down to outworking their opponents.

“They’re a very hardworking team.” Silkey said. “So we need to make sure we’re not taking any shifts off because you can tell they want it, and they’re good.”

After breaking the program record for most wins in a season, the team was overjoyed and is looking to take it even further, starting with the semifinals this weekend.

Jen Thomsen, a junior forward, said she is excited about the progress the team has made so far this season, especially breaking the record.

“Nobody thought we could get this far,” Thomsen said, “so we’re going to try to get as far as we can get … We all know what we’re capable of, and that’s the exciting part.”

Throughout the season, Strand said, the upperclassmen on the team,  like Silkey and Thomsen, have consistently provided leadership and guidance for the rest of the team, which he believes they don’t get enough credit for.

Strand said playoff games are notable because they can mark the end of a senior’s college hockey career. It is the culmination of “everything they’ve done in that program to advance it to where it’s at.”

While Strand said he thinks his team has figured out how to beat Stevens Point, these games will still be challenging.

“That’s why this playoff series is going to be one heck of a war — because you’ve got two programs that mirror each other as far as their passion for their players and their pride, and when two groups like that come together, usually something very memorable happens.”

The Blugolds take on the Pointers this Friday at 2 p.m. and Saturday at 3:30 p.m. at Hobbs Ice Center.