Blugolds struggle to score in back half of game, but hopes remain high for their upcoming conference tournament 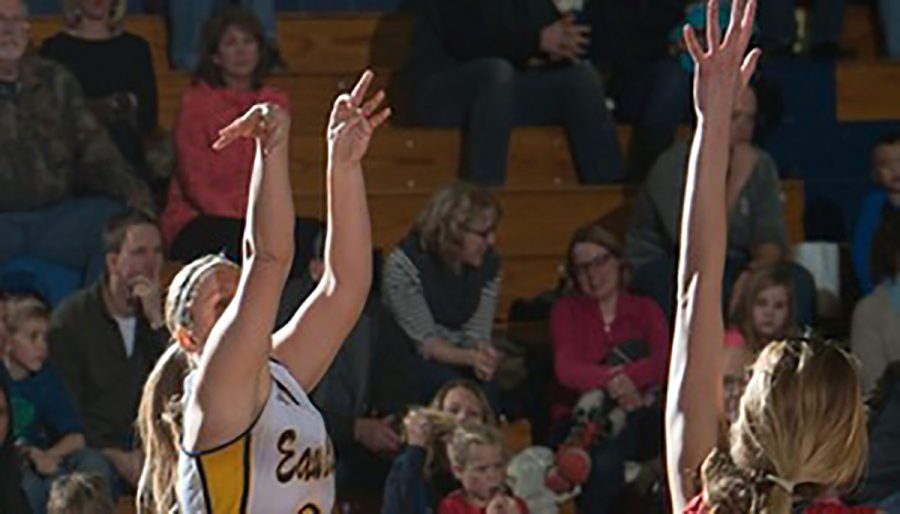 Despite a tough loss to the Eagles this past weekend, the Blugolds still aim to perform well at the WIAC tournament in late February.

The UW-Eau Claire women’s basketball team couldn’t pull out a win against the UW-La Crosse Eagles this past weekend, finishing the game with a final score of 62-44.

The game served as a part of the Blugolds’ three-game stretch that is set to determine the team’s seeding for the Wisconsin Intercollegiate Athletic Conference (WIAC) tournament in late February.

Freshman forward, Anna Graaskamp, the leading point scorer of the game with 17 total points, helped the Blugolds get off to a good start by scoring the first four points of the game. At 2:30 into the game, the Eagles caught up and tied the score to six points.

The remainder of the first period consisted of the Blugolds and the Eagles taking turns with the lead. Junior Kayla Hanley assisted junior Jenni LaCroix as she secured a three point shot, providing the Blugolds with a 15-14 lead in the last minute of first period play. However, La Crosse was able to catch up and closed the period with a score of 16-15.

The second period began in the Blugolds’ favor as freshman Hallee Hoeppner and sophomore Maddie Dunathan secured a handful of points, leaving the score at 20-16. Despite a bright start, the Eagles went on to dominate the remainder of the half, concluding the quarter with a 12-2 run and a lead of 28-22.

La Crosse’s run continued into the third period, securing them a 39-24 lead with four minutes left in third period play. Although senior Bree Meier was able to swish a deep shot at the close of third quarter, keeping the Blugolds within 10 points of the Eagles, La Crosse pushed for points throughout the fourth period and secured a strong lead, landing their victory.

Meier, a broadcast journalism student, said she felt the game did not reflect the team’s full potential.

“I definitely think we could have performed better,” Meier said. “We couldn’t get the offense going, and our defense just couldn’t make the stops we needed.”

Meier said the Blugolds’ loss to La Crosse will put them in an unstable position as they await their seed for the conference tournament. She said the team needs to walk away with victories in their final two non-tournament games in order elevate their chances of a higher seed.

Overall, Meier said she believes her team can get the job done when the time comes.

“Our goal is to just play the best basketball we can,” Meier said. “In the WIAC tournament, records don’t matter. Anyone can win. And when we play our best basketball, we can beat anyone in the conference.”

Eau Claire is back on the court this Wednesday as they compete on the road against UW-River Falls.