The Blugolds defeated the Yellowjackets 4-1 in both contests 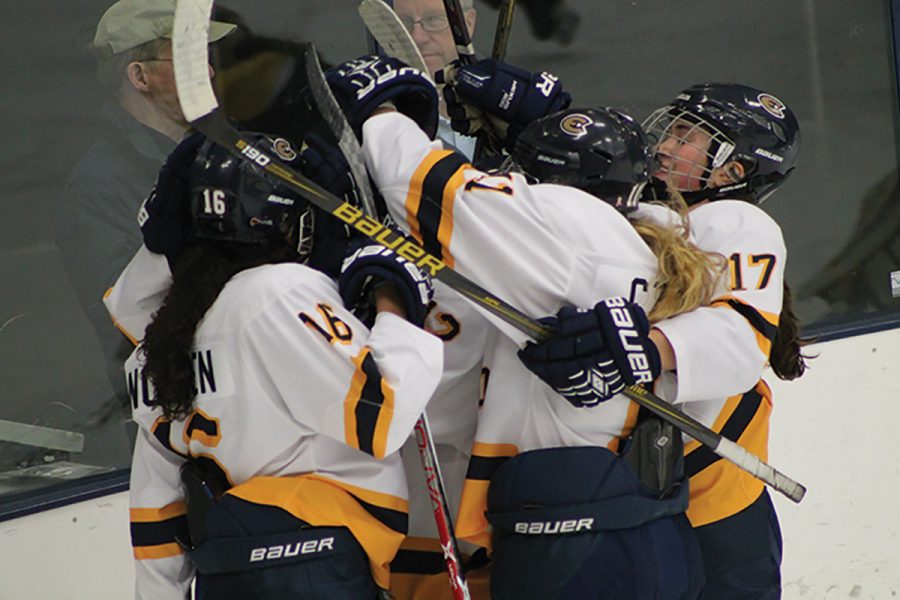 Players celebrate one of four goals scored against UW-Superior on Friday, Jan. 20.

The UW-Eau Claire women’s hockey team faced UW-Superior twice this weekend and remained consistent with winning scores of 4-1 for both games. After having lost to the Yellowjackets 3-1 earlier in the season, the Blugolds stepped up their game on both rinks, playing at home on Friday and at Superior on Saturday evening.

The women’s hockey team is now on a three-game winning streak, with a current season record of 14-5-1, and 3-1 in the Wisconsin Intercollegiate Athletic Conference (WIAC). Although both games ended with the same score, they started off very differently.

Both teams showed a lot of energy and fought for control of the puck at the start of the first period on Friday night, but the Blugolds gained their lead at the 9:23 mark when Monica Sjodin scored the first goal on a power play.

Not a minute later, freshman forward Elizabeth Bauer scored the second goal unassisted at the 10:15 mark. This helped secure the Blugolds with an early lead, which is a priority for the team, Bauer said.

“You have to come out strong,” Bauer said, “and that’s what we did.”

The Yellowjackets did, however, fight back. At the 14:30 mark, Hailey Adair put UW-Superior on the scoreboard, assisted by Hannah Currin.

After an eventful first period, the second period seemed like a never-ending battle as both teams struggled to find the back of the net.

However, the Blugolds continued to advance their lead when Elizabeth Bauer smacked another one into the back of the net on a power play, assisted by Holly Turnbull and Kelli Pritzlaff at the 15:09 mark.

Eau Claire held a strong 3-1 lead over Superior going into the third period, and they continued to hold their ground. After a penalty called on Superior’s Maggie Cragg for slashing, Eau Claire forward Claudia Gagnon scored the final goal at the 6:27 mark, with an assist by defenseman Lauren Norgren.

The Blugolds fought hard for their victory over the Yellowjackets and they would continue to do so the following day on the road.

The Saturday game at Superior started very differently than the game the night before.

This time, the Yellowjackets seemed to start off confident on their home rink, but found that it later waned as the Blugolds came back to dominate the second and third periods.

In the first period, Superior started off with an early lead when Kaleigh Martinson scored at the 3:03 mark, assisted by Hannah Currin. After a long series of changing puck possessions, penalties and missed shots, the Yellowjackets successfully held onto their lead going into the second period.

But they didn’t hold onto it for long.

Abby Roeser started up the momentum for the Blugolds with a goal assisted by Jaedyn Walz at the 8:23 mark in the second period.

After several penalties, the Blugolds had a one-man disadvantage as it was three on four; however, they held their ground and only 10 seconds after the Yellowjackets’ power play ended, Eau Claire struck again. Lexi Wilson scored an unassisted goal at the 15:56 mark, which pulled the Blugolds ahead for a 2-1 lead going into the third period.

After that, Eau Claire could not be stopped; the team scored another two goals in the third period. Sophomore defenseman Monica Sjodin said the success could be attributed to their team unity.

“We played as a team and we didn’t play as individuals,” Sjodin said. “No one was selfish at all.”

Lexi Wilson found the back of the net again at the 6:48 mark in the third period, assisted by Jaedyn Walz. Later, at the 11:08 mark, Eau Claire’s Mariah Czech scored the final goal on a power play, assisted by both Jaedyn Walz, her third assist of the day, and Claudia Gagnon.

The Blugolds finished the game with another 4-1 win against the Yellowjackets, although they did not start off as strongly in the second game as they did in the first.

Regardless, the back to back victories have the team in good spirits as they prepare to face the Pointers at 7 p.m. on Friday, Jan. 27 at UW-Stevens Point in the hopes of continuing their winning streak.