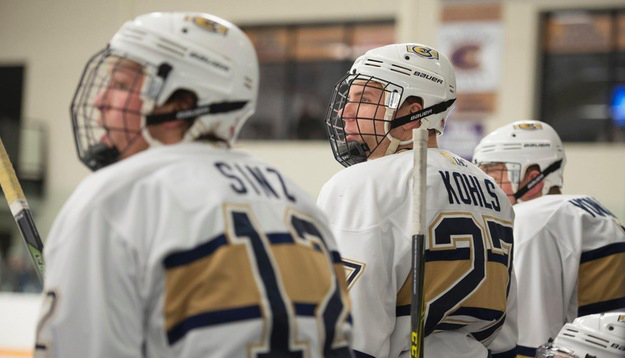 As both teams have achieved great success in the past five years (both winning one national championship a piece), this matchup has become an intense rivalry within the WIAC. Blugold senior goalie, Jay Deo, said the team isn’t happy whatsoever with the outcome of Friday’s contest.

“We are feeling a little bitter right now,” Deo said. “But it is a quick turnaround, as we have three games this week, so we’ve got to move on.”

Soon after the puck dropped at the beginning of the matchup, Eau Claire had to play catch up with the Pointers. At the 3:57 mark in the first period, Stevens Point athlete Lawrence Cornellier, assisted by Kyle Sharkey, slapped a shot past the goal line to give the Pointers a quick one-point advantage. This would prove to be the only lead change of the game.

After Eau Claire came up without a goal in the first period, the second period was much more evenly stacked up. Both teams scored quick goals, and the pressure was on Stevens Point to try to keep their lead going into the final period of play.

Despite a solid defensive effort through the first seven minutes of play in the third quarter, Stevens Point would once again find the backside of the net at the 7:14 mark. Pointer player Jacob Barber would score a shorthanded goal on a well assisted pass by Mark Bittner.

Not to be discouraged, however, Eau Claire also added to their goal total at the 17:38 mark in the third period. Blugold senior forward, Adam Knochenmus, scored a shorthanded goal as well on a timely assist by Patrick Moore.

Although the two teams were evenly matched up the last two periods of play, Stevens Point came out with the victory 3-2 over a hot Eau Claire team.

The atmosphere in Stevens Point was electric all night, as close to 1,000 fans packed the Pointers hockey arena. Blugold Radio 99.9FM color commentator described the crowds size as, “standing room only.” However, Eau Claire sophomore defenseman, Tyler Hart, does not believe that the passionate away crowd had any impact on the game itself.

“Obviously it is easier to get up for those games, so I don’t think it had any effect on the game itself,” Hart said. “Everybody has been in games like that already, so we were ready to play.”

The Blugold men’s hockey team is one that has enjoyed fruitful success the last five years or so. They last came away with the D3 national championship in 2013 when they defeated Oswego State (NY.) to claim the coveted title.

Hart said he believes that the team still has a solid chance of achieving their ultimate goal after a tough conference loss.

“I think we have a really good chance,” Hart said. “We have a lot of leadership and veterans on our team. I believe we have what it takes to win it all. We just have to come together and get on the same page.”

Eau Claire will have the opportunity to do just that when they take on St. Olaf College (Minn.) Tuesday night beginning at 7:30 p.m. The game will be available to stream online at blugolds.com.

The Blugolds will return home for a game at Hobbs Ice Arena in Eau Claire on Saturday, Jan. 28 when they take on UW-Superior in a highly-anticipated WIAC conference matchup.