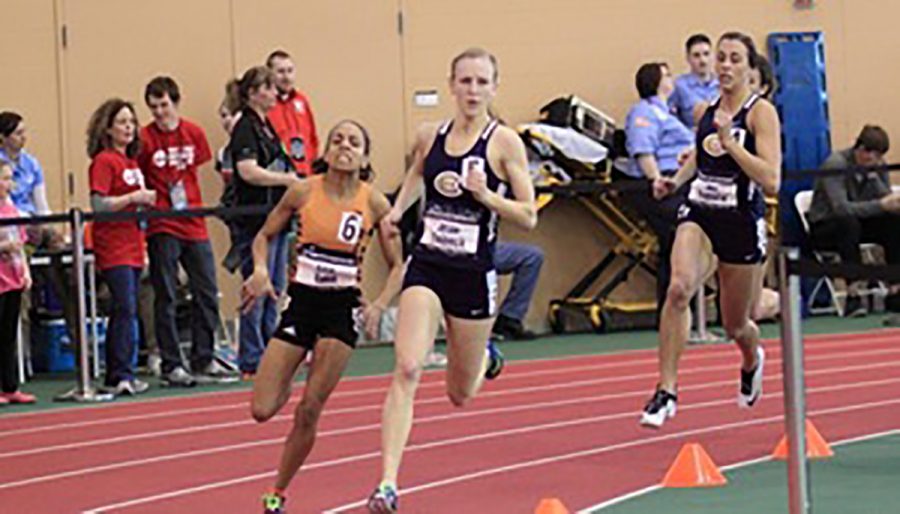 The UW-Eau Claire indoor track and field team competed in their first meet of the season Saturday at the Pointer Invite, racking up multiple team and individual victories across the board.

Kelsey Worachek, a junior communication sciences and disorders student, as well as one of the team captains, said team’s performance was a nice way to kick off the season.

“It was a great opportunity for our freshmen to get their first taste of conference competition, and our returning athletes made some great improvements as well,” said Worachek. “Both our men and women had a number of individuals who reached personal records already.”

The Blugold women were able to sweep the top three spots of the 400-meter dash. Jess Rupnow crossed the finish line first with a time of 58.00 seconds, while Ashleigh Burleigh took second in 59.98 seconds, and Sasha Riley followed in third with a time of 1:00.11. The Blugold ladies additionally secured the top three positions in the mile run as Morgan Marek, Sam Slattery, and Hanna Reed finished with times of 5:18.08, 5:18.59, and 5:23.26, respectively.

Tommie Brenner gained a victory for the Blugolds as she took first in the pole vault with a vault of 3.56 meters. Kylie Schuettpelz came in first in the high jump, jumping 1.60 meters. Stephanie Frempong-Longdon was victorious in the triple jump with a jump of 11.40 meters.

The Blugold men secured a handful of top three finishes in the running events. Jimmy Paske won the 400-meter dash with a time of 49.92 seconds, while his teammate Hunter Henk clocked in at 50.66 seconds, taking third. Darin Lau placed second in the mile run with a time of 4.17.34, while Jon Vodacek followed in third with a time of 4:20.25. Dylan Cooper finished the 60-meter hurdles in 8.68 seconds, securing third place for the Blugolds.

In the field events, the Blugold men gained another round of top three spots. Matt Dletlin took second in the pole vault with a vault of 14-7.50, and also took third in the high jump, jumping 1.95 meters. Jake Otterson earned third place in the weight throw with a toss of 16.12 meters, and TJ Lui took third in the triple jump with a jump of 12.74 meters.

Aside from individual performances, the Blugold men’s 4×400 meter relay team of Paske, Xavier Motley, Kyle Gorven, and DJ Meagher was able to secure second place with a time of 3:24.33.

Chip Schneider, the head track and field coach, explained the two weeks leading up to the competition included the team’s most intense training to date. Schneider said he expected the team to be a little tired going into the meet as a result, but the difficult training is necessary for the team to achieve their goals of getting as many members to improve week by week, thus securing conference spots.

Overall, Schneider said he was satisfied with the team’s performance and happy to see his athletes post nationally ranked times so early in the season.

“It’s always tough to compete on the road,” said Schneider. “It was the first meet, and we were in a different environment than we were used to back home, but we had a lot of runners get top times. They did well.”

The Blugold men’s and women’s track teams will return to competition Friday at UW-Stout in the Warren Bowlus Multi.