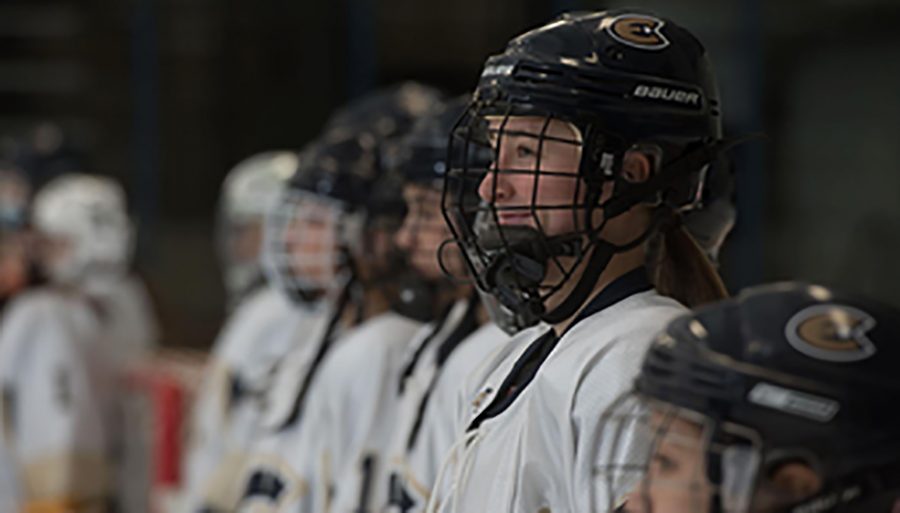 Players on the sideline help support their fellow Blugolds as they dominate the game 5-1 on Friday night against Saint Mary’s University (Minn.) at Hobbs Ice Arena.

Friday night wasn’t the first time this year the women’s hockey team played against the Saint Mary’s Cardinals. The Blugolds had conquered the Cardinals with a 4-0 victory earlier this season.

“We knew last time since we won 4-0 they were going to come back even harder, but we did the same,” sophomore forward Courtney Witting said. “We stayed positive on the bench and played Blugold hockey.”

Eau Claire started the game off strong with a goal shot by freshman forward Elizabeth Bauer off a power play at 8:22 in the first period off an assist by Wittig and sophomore defense Holly Turnball.

Only two minutes later, freshman defense Sami Meister followed in close pursuit as she took a shot from the blue line and found the puck at the back of the net off an assist from sophomore forward and defensive player Courtney Baugher, resulting in a score of 2-0.

At 13:18 in the first period, Eau Claire received a penalty on Turnball for checking resulting in a power play opportunity for Saint Mary’s.

They were unable to take advantage of that opportunity however, and the first period ended with a score of 2-0 in favor of Eau Claire.

Only one minute into the second period, the Blugolds would strike again off of a shot made by Baugher assisted by Bauer and Turnball, resulting in the score of 3-0.

The Cardinals were struggling to keep up with the Blugolds and were out shot again as freshman forward Emily Bauer found the back of the net from an assist by sophomore forward Kelly Knetter at 7:22, ending the second period with a score of 4-0.

At the top of the third period Witting added another point to the Blugold scoreboard off an assist by sophomore defense Maggie Koethe and freshman defense Reilly Albert.

It wasn’t until 5:33 of the last period where Saint Mary’s finally touched the back of the net, resulting in a score of 5-1. The Cardinals goal didn’t do much damage though, the Blugolds finishing the game with a four-point lead.

Elizabeth Bauer said she thought their win was a really good night for the team in general.

“We have been focusing on hunting the puck as a team and our lines were really clicking that night,” Bauer said. “We came out ready to go right away and that definitely made the difference.”

The Blugolds were looking to finish the weekend strong after crushing Friday night’s game. They continued their fast-paced play on Saturday night against Marian University as they controlled the puck in the Marian zone for the first five minutes of the first period.

Both team’s goalies stood their ground and neither the Blugolds nor the Sabres were able to slide the puck past them until the third period.

Courtney Wittig said in the first period the team came out kind of weak but it was during the second and third period that they started to pick up.

“This week we have been focusing on taking our shot selections and we will continue to grow and learn on that,” Wittig said.

8:25 minutes into the game in the third period, a penalty was given to Marian University for roughing, resulting in a power play opportunity for Eau Claire.

The Blugolds used the power pay to their advantage and it was at 9:24 in the third period that Eau Claire made the first strike and Knetter scored a goal off of an assist by Koethe.

The score stood 1-0 for the Blugolds until the Sabres crept up behind them and scored a goal at 16:15.

The overtime period brought some fast hockey with plenty of scoring chances, but neither team came out on top.

Bauer said she thinks that they just needed to play their game and make sure they got traffic to the net to get the kind of goals they needed against a team like Marian.

Blugold hockey will take a short break for finals but return on the ice on Dec. 31 when they play at home against St. Catherine’s University (Minn.) at 11 a.m. A box score, and game recap, will be available immediately after the game on blugolds.com.