Men’s basketball team looks ahead to tournament in Las Vegas

Team prepares to take on two teams in D3hooops.com Classic 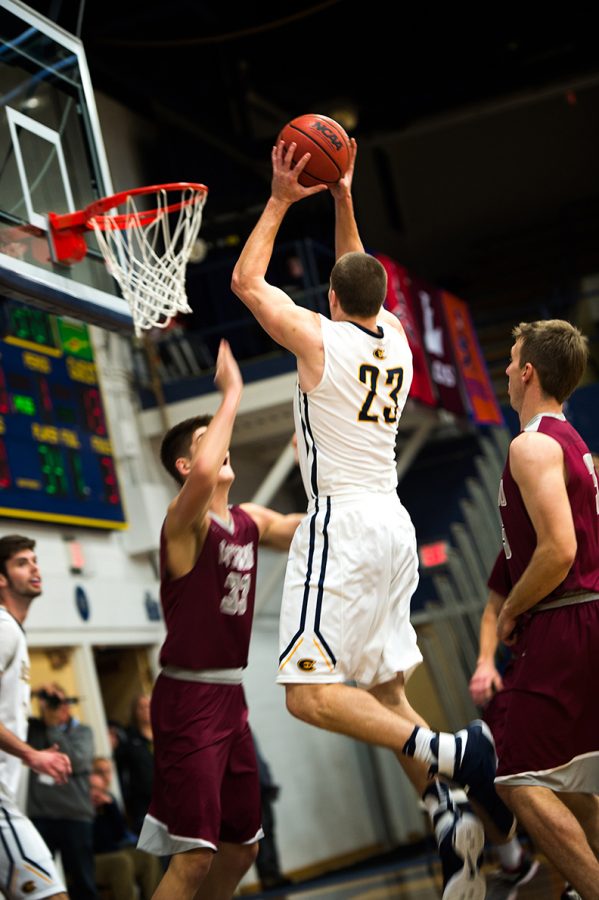 Freshman Josh Weix aims and shoots during a game against Viterbo University.

Following their loss against Wartburg College (Iowa) Sunday, the UW-Eau Claire men’s basketball team will be taking a two-week break before reconveining oncourt at the D3hoops.com Classic in Las Vegas.

Head coach Matt Siverling said the team has been successful so far this season and will continue to be as they head to Las Vegas at the end of the month for the team’s second tournament of the year; the first was in St. Louis where the team won against both Rhodes College (Tenn.) and Washington University (Mo.).

Despite a majority of the team’s games being wins – with their record being 8-1 – Siverling said there is always room for improvement and the team is working on their defensive skills and sharpening their offense. He said doing so proves to be difficult this time of year.

“We’re trying to maintain a balance right now between finals and practice,” he said, “which is always a challenge because our guys are mentally trying to prepare to finish up the semester. At the same time, we’re trying to get on the court and improve some areas.”

Siverling explained a lot of the team’s strengths come from the player’s sense of solidarity.

“I think our team plays really well together,” Siverling said. “They get along on and off the court. They share the basketball, they don’t really care too much about who takes the shot and who scores the baskets. I think defensively we play together as well.”

At the tournament they will play two games, the first against Gustavus Adolphus College (Minn.) and the second against UC Santa Cruz (Calif.).

Siverling said he thinks the biggest challenge at this tournament will be to keep the team focused after travelling and being exposed to a completely new environment after a short holiday break. However, he said he is happy to be travelling with the women’s basketball program as well, as he sees this as a bonding opportunity for the two programs.

He said the men’s team will get back together for a few practices in Eau Claire before heading across the country. There will be one day in Las Vegas for the team to adjust and practice before the tournament begins.

Senior center Jared Schneidermann said although he expects Santa Cruz to have a slightly different style of play, he’s confident Eau Claire will do well against the competition.

Schneidermann said he is excited about the upcoming tournament because it will be a new experience for the team to be in Las Vegas and will offer great exposure.

“Hopefully we’ll be able to take care of business on the court, win and see if we can do any sightseeing while we’re down there,” Schneidermann said.

As he moves toward graduation in May, Schneidermann said he is not looking forward to leaving his basketball team behind. Because he has been playing on Eau Claire’s team since he was a freshman, he said he has formed numerous friendships and has drawn parallels between basketball and life in general.

“A lot of the stuff you learn on the court with your team can be correlated to the daily life as well, whether that’s hard to believe or not,” Schneidermann said. “Learning about teamwork and all the interchangeables that come with playing with a team really carry over to a career and work.”

This season’s conference games, which Siverling said will be tough, follow the D3hoops.com Classic. He said everyone has an extremely good team and it will be a lot of competition. To prepare for this, he said the team will focus on working hard and trying to do their best in all facets of the game.