With a final score of 3-1, the UW-Eau Claire men claim another crucial WIAC conference victory 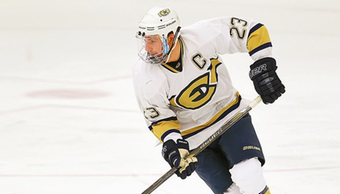 The Blugolds are on a roll, winning eight of their first eleven games. Photo was taken by Eau Claire photographer Chico LaBarbera for blugolds.com.

“We are feeling tremendous right now,” Deo said. “It was a huge win last night. A huge confidence boost knowing we can play well against the top teams as well as we did last night. Their record doesn’t show how good they really are.”

The second period of the game would be evenly matched, as both squads managed to find the net once a piece. River Falls scored at 10:10 on a power play goal by Christian George, and Eau Claire scored at 15:13 on a Hopfner goal assisted by Tredinnick and Lee.

The third period of play would be all Blugolds, as the only goal of the period came at 13:05 when Mac Jansen scored a goal during a power play. The Eau Claire players assisting on this goal were Patrick Moore and David Henry. The Blugold defense managed to hold the Falcons scoreless throughout the rest of the period.

Besides Tredinnick who assisted on two Eau Claire goals, the standout performance of the night was from Blugold goalkeeper Jay Deo. Deo saved 20 out of 21 shots, and managed to hold a usually high scoring River Falls offense to only one goal on the night. Deo said his success was only made possible by his teammates effort.

“Our team play in front of me played great,” Deo said. “The defense and forwards were all on the same page in the d-zone, and that made for a lot cleaner defense. It made my job really easy.”

The team has started out the season strong, and they look poised to continue their success if they can keep up their level of excellence. Junior forward, Colton Wolter, says that the team just seems to be firing on all cylinders.

“Guys are starting to find their roles on the team, and finding out what their best way to contribute to the team is,” Wolter said. “There is a good amount of chemistry going on right now, and I think our lineup is solid from top to bottom. Everybody is finding their place to fit in.”

The Blugolds’ next game will come against the Hamline University (Minn.) Pipers, a team that has experienced a lot of success as well this season. Hamline currently owns a record of 6-3-2, but they are also on a two game home losing streak (which bodes well for Eau Claire).

In order for the team to succeed against Hamline, as well as in every game for the rest of the season, Wolter said the team needs to focus on their team effort.

“I think from here on out our biggest test is going to be showing up every night no matter the opponent,” Wolter said. “Not playing 45 or 50 minutes, but a full 60 to give us a chance to win every game.”

Eau Claire’s next game will take place on Friday Dec. 9 against Hamline University (Minn.) in St. Paul, Minnesota starting at 7 p.m. Post-game box scores, and in depth statistics, will be available on blugolds.com. The Blugolds will return to Hobbs Ice Arena in Eau Claire on New Year’s Eve when they take on Marian University.