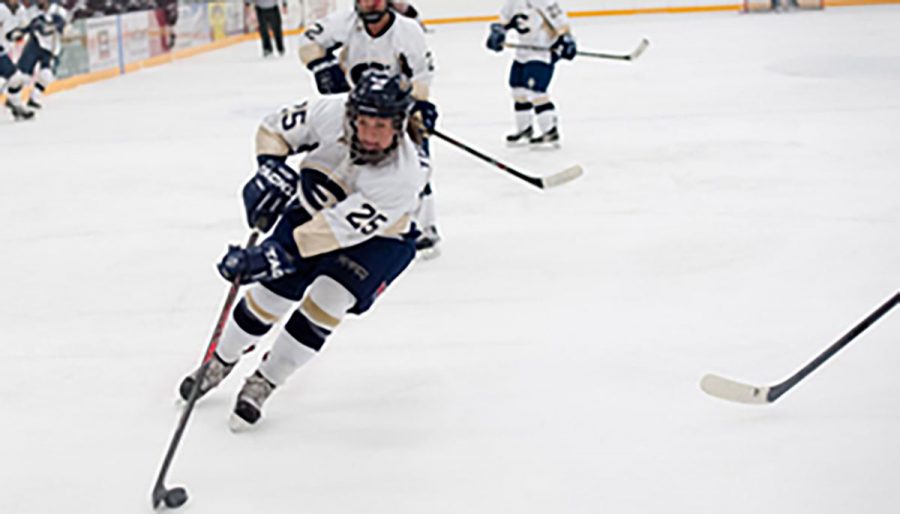 While the team came up short, losing to Gustavus 3-2 last night, their hopeful spirit and persistence was clear throughout the game.

This year was the first year in program history Eau Claire has played Gustavus, and while the first contest ended in a 3-1 loss, head coach Erik Strand said he was excited to see how the team matched up the second time around.

“Even though it’s been a short period of time since the last time we took the ice against them, I think we are a dramatically different team,” said Strand. “We’ve improved in a lot of areas and have a little bit of swagger and confidence right now.”

Strand said the team who comes out on top Tuesday night will be the one that’s able to execute their system better. While he admits the Blugolds are a younger team than Gustavus, he said both teams are similar with four lines that can move quickly and defensemen with excellent goaltending.

Sophomore forward Erin Goodell shared Stand’s hope for improvement this time around. She said the team has learned their systems and been “on a roll” lately.

The main focus for the game, Goodell said, was “just playing a full 60 minutes together as a team and running our systems the whole time.”

Strand said the team is stronger than before, having had some big historical wins for the program this year and hungry for more. He said the team’s “never give up” attitude is exciting for him.

“Our work ethic, it hasn’t become the official slogan this year, but ‘never satisfied,’ you can always hear it whether it’s coming from us as staff or a group of players,” Strand said. “We’ve had some historic wins already this year and it’s early in the season for us, and for me as a coach of this group, that’s exciting.”

When it came to putting their plans into action Tuesday night, the team came up just short against Gustavus, losing to the Gusties 3-2 at Don Roberts Ice Rink.

Late in the first period at the 17:00 minute mark, Gustavus put up the first points of the game in a power play completed by Laura Johnson. However, the Blugolds didn’t allow the early Gusties lead to get them down.

The second period was dominated by Eau Claire and Courtney Wittig scored for the blugolds at 5:19, putting Eau Claire on the board.

But the Blugolds were unable to maintain the momentum heading into the third period.

At 10:59, Gusties Kaitlyn Klein tied the game, with Emily Gustafson giving Gustavus the lead at 14:18. The Blugolds were unable to score in the remaining minutes of the game, leading to a their loss.

Eau Claire only managed 13 shots on goal throughout the course of the game, compared to 34 shots by the Gusties. Erin Connolly made 31 saves for the Blugolds, managing to hold Gustavus back from an even greater lead throughout the game.

The Blugolds spent 14 minutes in the penalty box on seven infractions throughout the game, which may have contributed to the loss, as Gustavus spent six minutes on three infractions.

While the game may not have gone as planned for the Blugolds, it is an improvement from the last time Eau Claire faced off against Gustavus, when they lost 3-1.

The loss leaves the Blugolds’ record at 6-4 and 1-1 in the Wisconsin Intercollegiate Athletic Conference play. The Blugolds will face off at Hobbs Ice Arena next week against Saint Benedict (Minn.) on Dec. 5 at 7 p.m.