The truth about Title IX 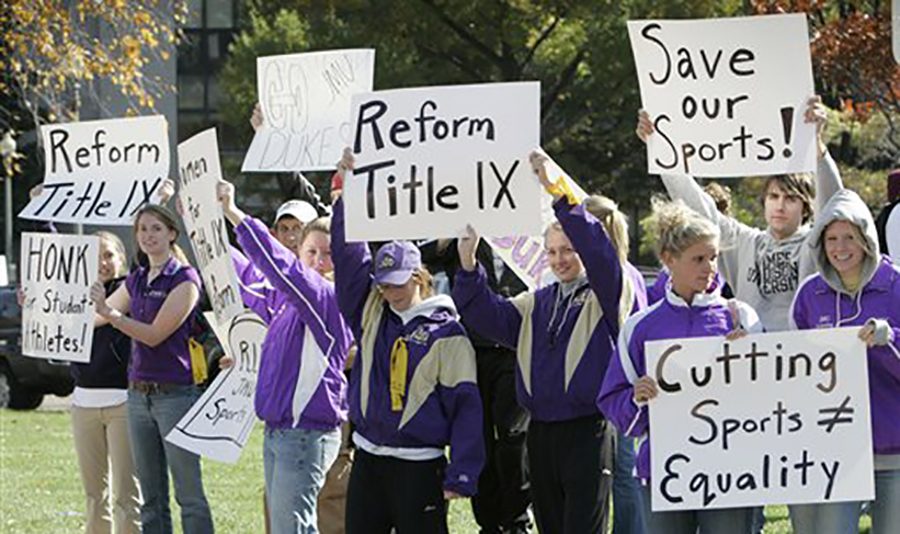 While Title IX has made some strides in improving gender equity among athletics, injustices remain present and call attention to recurring flaws.

For a decent amount of young women across the nation, sports are a way of life. I have been involved in athletics for a generous portion of my 19 years and am thankful for the opportunities  sports have given me.

Throughout a majority of my competitive years, I was unaware how lucky I was to have the privilege to be an athlete in the first place.

This realization finally hit when I was a sophomore in high school when my high school was pressed with a Title IX violation report. It called for the district board to reevaluate their approach to gender equity within the school athletic program.

Title IX is a legal enactment of 1972 which states, “No person in the United States shall, on the basis of sex, be excluded from participation in, be denied the benefits of, or be subjected to discrimination under any education program or activity receiving Federal financial assistance.”

In other words, Title IX paved the way for full gender equity within the realm of high school and collegiate athletic programs. Gone were the days of institutions denying young women the right to participation in athletics and competition. Another realm originally dominated by males opened its doors to the female population.

Or so we thought.

Although more than 40 years have passed since Title IX’s debut, it remains a controversial topic. While the athletic enactment has arguably made substantial progress in terms of female athletic participation and engagement, it has also been criticized for lack of effectiveness and enforcement.

On one hand, it’s no secret that Title IX has allowed for the encouragement of female participation in athletic endeavors. The New York Times reported that in 1971, the year before Title IX was enacted, about 300,000 women across the nation were involved in high school or collegiate athletics. That number has since soared to nearly 4 million.

Furthermore, Scholarship Stats stated the inclusion of young women in the National Collegiate Athletic Association (NCAA) has allowed for female varsity athletes across the nation to rake in an annual average of approximately $1.4 billion in athletic scholarships.

Varsity collegiate sports refer to programs (such as the NCAA) in which athletes represent their university in competition, allowing for scholarships to be offered at both the Division I and II level.

On the other hand, collegiate club sports allow for any student to join on the basis of interest, without the benefits of financial assistance. Title IX applies to both varsity and club athletic programs.

However, mere improvement does not necessarily entail success. A law can only be as strong as long as it’s enforced. In the case of my high school and countless other public institutions, having Title IX in place did not stop gender inequities from taking place in athletic programs.

Additionally, in terms of sports facilities and equipment, statistics show that public institutions allow for men to receive 70 percent of the provided budget.

As a varsity athlete, this information comes as no shock to me. In high school, I was a part of the swim team for four years. Until the Title IX report was filed, female athletes were forced to comply with an athletic locker room nearly half the size of the men’s locker room. As a freshman, I didn’t even receive an athletic locker.

In addition, the women’s swim team had a competition pool that was painfully outdated and lacked starting blocks. Competing without starting blocks is synonymous with requiring a football team to compete without end zones — utterly pointless. Needless to say, we never once hosted a competition.

As a Blugold athlete, I have experienced this disparity firsthand. While popular men’s teams such as the football and basketball programs have gained yearly financial support in the form of updated uniforms, athletic merchandise and appropriately maintained facilities, programs such as women’s swimming and gymnastics continue to lack similar experiences.

At the Division III level, the Atlantic claimed additional budgeting to “popular” men’s programs are a dead cause, as they tend to spend more than they make in profits.

On the other hand, critics claim females are not the only ones experiencing trouble at the hands of Title IX, as the athletic enactment contains specific technicalities that have put men’s programs in the crossfire.

According to Time Magazine, the equal participation quota is an aspect of Title IX which calls for public institutions to ensure the ratio of male to female athletes is equal. However, such a quota can be destructive when a handful of male sports lacks a female counterpart. If this occurs, compliant schools are forced to cut men’s teams in efforts to generate a proper ratio.

Time Magazine also claimed over the course of the years since Title IX’s implementation, nearly 4,500 cuts have been made to men’s athletic programs in compliance with the ratio requirement, specifically 450 men’s wrestling programs. Men’s swimming and diving follows close behind with nearly 398 cuts, as well as men’s gymnastics with 247 cuts.

The evidence provides the harsh reality that good intentions don’t necessarily guarantee good outcomes. While it is a beneficial concept in the sense of gender equity, Title IX clearly has flaws requiring attention.

Overall, the fight for gender equity in athletics is certainly justified. While Title IX has proven to be a beneficial pitstop on the journey to equality, we still have a long way to go.