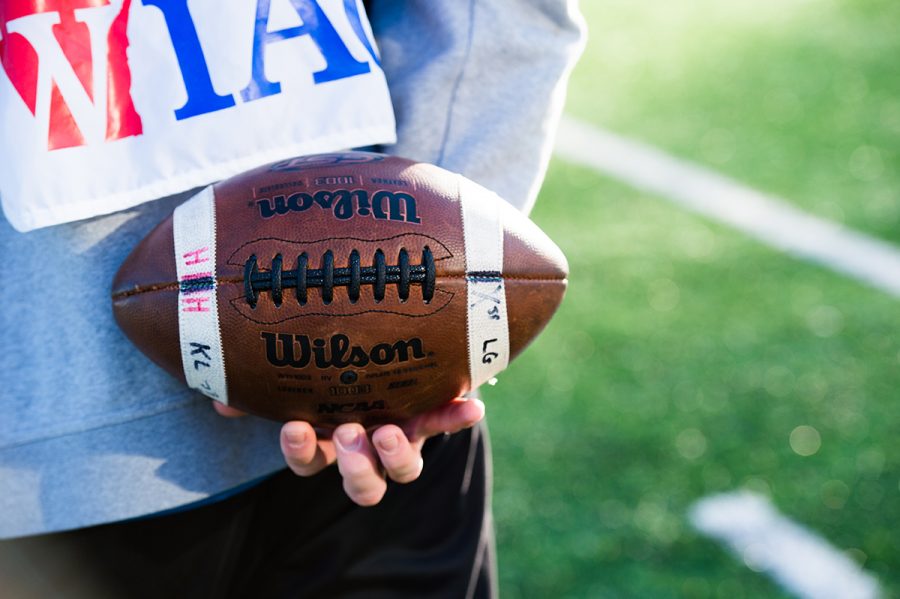 The UW-Eau Claire football program wants to be a contender in the Wisconsin Intercollegiate Athletic Conference (WIAC). They want to be considered a football powerhouse and they want to draw young talent to the university.

Upon completion of their 2016 season, the Blugolds took a step toward that ultimate goal.

Eau Claire ended their season last Saturday against UW-Oshkosh at Carson Park in Eau Claire. Their end of the year record came to 2-8, and their WIAC record came to 1-6. The Blugolds also logged an identical home and away record of 1-4. This year’s win total is a 200 percent improvement from their winless 2015 campaign.

Over the course of the season, there were two high points for the squad.

The first came on Sept. 24, when the team defeated Wisconsin Lutheran 40-14 in dominating fashion on the road. This game yielded the largest statistical performance from sophomore quarterback, JT Denhartog, who threw for 151 yards and four touchdowns (he ran for an additional touchdown).

The second-high point for the team was against UW-La Crosse on Oct. 22, when the Blugolds defeated them 20-14 at Carson Park. This win was a shocking upset and welcomed change of pace for the Blugold football fan base. Leading the way for Eau Claire during this game was running back, Antwan Moore, who ran for 111 yards on 11 attempts on the ground.

With these impressive performances, there were also a few eerily familiar large margin losses for Eau Claire as well.

The team started out the season rough, losing 42-6 to St. Thomas (Minn.) on the opening day of the season.

In addition to a few other disappointing losses along the way, the lowest point for the Blugolds came on Nov. 5, when they were decimated 56-0 by a fierce UW-Platteville team.

Through all of these performances, Eau Claire produced some statistics that offered both hope for the future and the realization that a lot more work needs to be done in order to become significantly more successful.

The shining star on the Blugolds offense this season was graduating senior wide receiver, Matthew Knapp, who tallied 642 yards in the air and eight touchdowns. The loss of Knapp will be a hard one for the program, as the rest of the receiving core was spotty at best throughout the season.

Wide receivers such as Leeshaun Evans and Brody Diggins will need to step to the forefront of the offense in order to provide Denhartog with sufficient weapons on offense.

The shining star on the Blugolds defense this season was senior cornerback, Bo Casper, who finished the year with 52 tackles in 10 games.

Injuries were prevalent on the Eau Claire roster this season, so having a consistently solid defensive player was pivotal for the team. Casper emerged as a leader on and off the field, and was a critical component of a young Blugold defense.

The largest component that needs addressing is the team’s defense. Eau Claire gave up a shocking 34.6 points along with 410.7 total offensive yards per game. Those numbers are staggering and they need to be drastically reduced next season if the team wants to have any hope of staying in games.

To put those numbers into perspective, the Eau Claire offense scored 13.9 points and racked up 263 yards per game. Those numbers are so spread out from each other, because when the Blugolds lost, they lost by a large margin in most cases.

Starting quarterback Denhartog had a respectable year at the head of the Eau Claire offense. He threw for 1,479 yards, 12 touchdowns and 8 interceptions. He averaged about 147.9 yards per game through the air and had a somewhat disappointing completion percentage of 54. Those numbers however should not only be attributed to Denhartog, but the offense as a whole.

Denhartog rushed 157 times for a total of 265 yards this season, which is absolutely ludicrous. A starting quarterback, no matter what level of play they partake in, should not be having to leave the pocket that many times per game.

Eau Claire’s offensive line did not protect Denhartog nearly enough, and many times he was forced to leave the pocket after a second or two, due to poor protection. With better protection, Denhartog will continue to develop quickly over his last few years at Eau Claire.

The struggles on the offensive side of the ball don’t stop there, Eau Claire consistently ran four different running backs over the course of the season. This amount of inconsistency contributed to the Blugolds case of option paralysis at the running back position.

Whether it was Brian Kulaga, Matthew Knapp, Gerald Childs or Antwan Moore taking a majority of the snaps in any given game, the game plan was not carried over into the next week of play. Without a consistent running back, the team did not know where to turn to receive consistent rushing yards, and their offense suffered because of it.

If Eau Claire wants to produce on the ground next season, the first step they need to take is solidifying a solid starter and backup at the running back position. Moore and Kulaga produced consistently this season, so they would be my suggested one two punch next season.

With all of that being said, did the season live up to the pre-season expectations? Well, I believe that the answer you will receive will vary upon what party you choose to ask.

If you ask the players or the coaching staff, they will without a doubt tell you that the season did not live up to their pre-season expectations. That is the politically correct answer, as two wins under a new head coach is not a number of wins that any team in Division III is striving for.

But if someone were to ask me whether or not the team lived up to my pre-season expectations, I would strongly answer yes.

I was not expecting the team to suddenly emerge as a powerhouse, or even go 4-6 and become a playoff bubble team. Those are unrealistic expectations for a team that did not emerge from the 2015 season with a single victory.

The season progressed just how I expected it to. The new atmosphere head coach, Dan Larson, has brought to the university helped keep the player’s heads up in the locker and produced a couple of wins. Asking anymore of Larson, or his team, would have been asking too much for a team knee deep in a rebuilding phase.

As far as the fans pre-season expectations, I can say without a fair amount of certainty the season was a disappointment to them. The Blugold football fan base is an impatient one, and they will not be fully satisfied with a season until they begin to produce a winning record. The same can be said for most football programs around the country.

Overall, the 2016 Blugold football season was a step in the right direction for a football program that has been hobbling for the past decade. The team has begun to develop some young talent, find ways to win games and learn how to handle some disappointing results.

If the Blugold football team is to make even more progress next season, they need to do two things.

The first is to train hard in the offseason and become more physically dominant. Many times the team’s roster was dwarfed by the opposing team.

The second is they have to believe that they can win. That is key in becoming successful in any field. They need to learn to not be discouraged when they experience a tough loss, and instead use that to fuel their fire to succeed.

The Eau Claire football team has a lot of potential and they showed that this season. The next step for them is to continue to work toward their goals, and believe they can accomplish those goals. If they do that, they can help mend the team’s public reputation and help develop the football program into one that can contend for the WIAC conference championship. This season was their first step toward that.