Matthew Knapp has been a major part of the UW-Eau Claire offense for years, and his time at the university is wrapping up 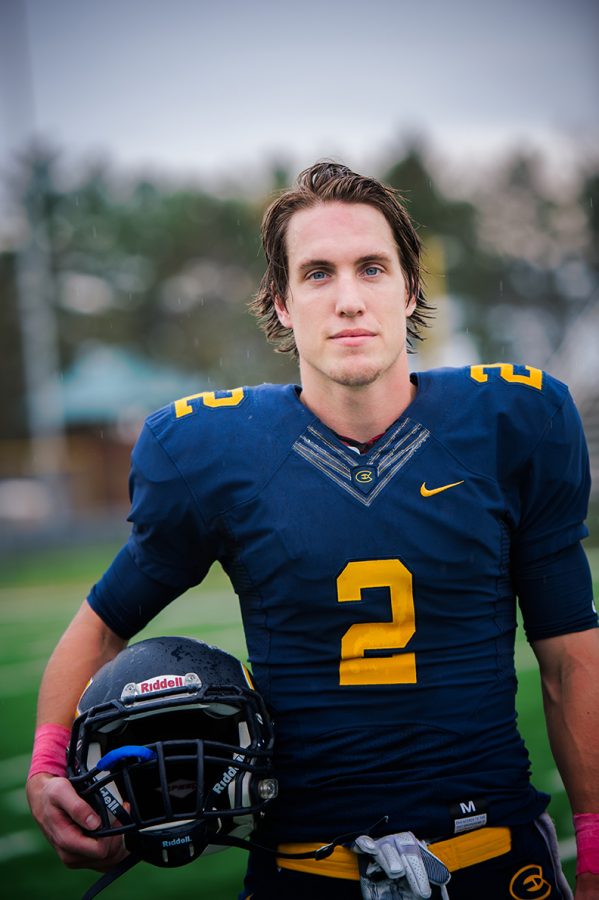 Knapp manages to excel on the field and in the classroom despite a relentless schedule.

Carson Park has been his home for all of his young adult life. Playing football on its turf has become second nature to an athlete who has developed into a model of excellence at UW-Eau Claire on the field and in the classroom. But all good things must come to an end. That time for this Eau Claire wide receiver has nearly arrived.

Matthew Knapp has been around football since he was born. His father played football for many years and he was a major influence on Knapp to begin playing tackle football in the fifth grade. He began to develop his abilities, which began to take shape when he entered high school.

Knapp attended Memorial High School in Eau Claire and was heavily involved in the football program. While working his way through school, he played quarterback and safety for the team. Knapp said his time at Memorial was good but it didn’t start out that way.

“We had a new coach come in my freshman year of high school and turned the program around by my senior year,” Knapp said. “We ended up going 8-2 that year, and my freshman year the varsity team went 0-9. Overall it was a fun experience with a great group of guys. They are still some of my best friends to this day.”

After Knapp received his diploma from Memorial, he chose to attend Bemidji State University. After spending his freshman year there and not knowing what he wanted to do academically, he decided to move back to his hometown of Eau Claire and attend the university.

Knowing the area and specifically the business school well, Knapp decided to declare a finance major. And of course he decided to join the football team upon his return.

After high school graduation, people move to different parts of the country, meet new friends and personalities change. For Knapp, one of these major changes came on the football field when he joined the Blugolds.

“I was kind of hopping from position to position. They didn’t really know where they wanted me to play,” Knapp said. “I started out at safety, then moved to QB six weeks in or so and my second year here I moved to receiver.”

Since arriving at the university, Knapp has worked tirelessly to succeed on the field and in the classroom. Whether it be hitting the weight room, studying film or going over game plan with his coaches, Knapp is no stranger to hard work.

Staying motivated is a hard task for any student athlete but what keeps Knapp motivated is the fact that he gets to “go out on Saturdays and play one of the greatest sports on earth.”

Teammates such as Bo Casper and JT Denhartog have helped Knapp push himself in the weight room and in the classroom. A lot of his team members are some of his best friends and when they are giving it their all, he feels obligated to do the same.

Even though Knapp did not intend to become a wide receiver when he first came to Eau Claire, he has managed to excel at the position.

In the eight games played so far this season, Knapp has caught 29 balls for 548 yards (averaging 68.5 yards per game and 18.9 yards per catch). On top of that, he has caught seven touchdown passes, leading the team.

Knapp’s abilities have become more refined each season. Eau Claire starting quarterback, JT Denhartog, said he is a great person to have in the locker room and as a teammate on the field.

“He’s a great leader,” Denhartog said. “He’s one of our captains, and it is well deserved because he leads the guys really well. Football wise he is extremely quick and has great hands, and so he is really dynamic and can stretch the defense out.”

Eau Claire has improved this season, winning two games so far after a winless campaign last year. But like a true competitor, Knapp is not satisfied with just improving. He feels that they can play even better.

“The season hasn’t gone entirely as we’d pictured it,” Knapp said. “We knew it would be a reloading year with the new coaching staff. It has definitely taken some time to get used to. I think earlier in the season we let a few wins slip away that we should have had. But overall I feel like we are definitely turning the program around.”

The Blugolds’ next game is on the road against UW-Platteville this coming Saturday but all eyes will be on Knapp on Saturday Nov. 12 when he plays his final game at Carson Park.

It is a place that has played host to incredible wins and crushing defeats for Knapp, so leaving it for the last time will be an emotional experience.

But before he enters the office, he hopes to travel after he graduates and spend time outdoors with his friends and family. Knapp said Eau Claire is his home, but he wants to see a little more of the world before he focuses on his career, which hopefully will be based in Eau Claire.

Since arriving at Eau Claire, Knapp has helped start the rebuilding process for a football program that has been struggling for years. And this year the football team is starting to make strides towards becoming a winning program again.

All of Knapp’s hard work on the field will not be forgotten when he leaves Carson Park for the final time. Players, coaches and fans alike will remember his efforts for years to come.

The work ethic and tenacity that he developed on the field will help him succeed in the business world after college, and it is something he said can only be learned through sports.

Whether it be on the football field, in the classroom or just as a friend, Matthew Knapp has been an example of excellence. When his football career comes to an end, that excellence will only transfer to the next chapter of his life.