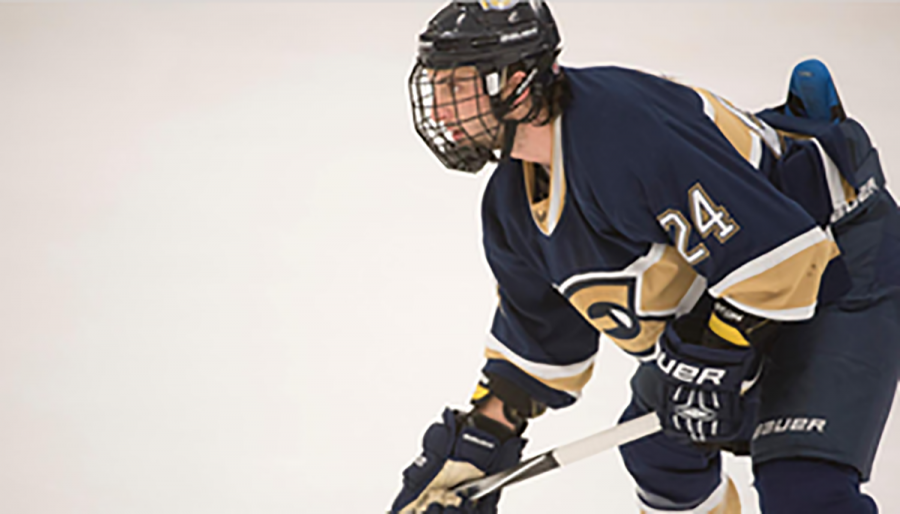 Sophomore defensive player, Tyler Hart plays with the rest of his teammates at Ed Saugestad Arena against Augsburg College on Saturday night.

The Blugold’s men’s hockey team played two away games on Friday and Saturday over the weekend. Friday’s game against the Saint Mary Cardinals (Minn.) resulted in a tie of 3-3, while Saturday’s game against Augsburg College (Minn.), the Blugolds fell short 2-1 in overtime.

The Blugolds started off the game strong Friday night at Saint Mary’s ice arena with senior forward Adam Knochenmus scoring a goal with just 7:18 into the first period, which was assisted by senior forward Patrick Moore and senior defensive player Bryan Sinz.

Junior Forward, Jacob Wolter, added another point to the Blugold’s lead on an impressive stick-to stick-pass from junior forward Kyle Lee with thirty-six seconds left in the first period, resulting in a lead of 2-0 in favor of Eau Claire.

The level of competition increased on both rosters during the second period, resulting in three goals and eleven total penalties.

UW-Eau Claire was looking good at 17:33 in the second period when junior forward Jake Hopfner attributed another point to the Blugolds on a power-play goal.

The Saint Mary Cardinals made a come back and just 1:16 later Taylor Portner scored a goal to make the score 3-1.

From the 14:48 mark to the 8:48 mark in the second period, both teams were penalized nine times collectively with six of those being roughing minors.

With the Blugolds falling behind, the Cardinals increased the gap in the score with another goal with just 5:44 left in the second period.

In a rough period for UW-Eau Claire, the Cardinals outshot the Blugolds 15-6 in the second period. Eau Claire junior forward, Kyle Lee, said the team lost its grasp on their fundamentals during this period of the contest.

“We started to play too content and thought we’re going to run all over that team,” Lee said. “We started losing one-on-one battles and stopped doing the little things.”

St. Mary’s tied up the game just over five minutes into the third period on a goal to make it 3-3.

A five-minute overtime time was needed but neither team could break the 3-3 tie.

“I wish we never took off our foot on the gas pedal and kept on competing to beat a good hockey team, which we let come back,” Lee said.

Saturday night’s game against Augsburg College at Ed Saugestad Arena resulted in a winning score of 2-1 for Augsburg.

The game was taken into overtime, but Blugolds were unable to attain more points resulting in a loss.

At 9:55 of the first period, Blugolds received a penalty on junior defensive player RJ Majkozak for holding, resulting in a power play opportunity for Augsburg. The Auggies used this play to their advantage and scored the first goal of the game at 11:27.

Neither team was able to score a goal in the second period.

“We were flat the first two periods, but in the 3rd we dominated them,” Lee said.

Both teams were given plenty of opportunities to score in the rest of the period but were unable to beat goalie play from both Auggie’s goalkeeper, Nick Schmit, and Blugolds senior goalkeeper Jay Deo, resulting in the game going into overtime.

With just thirty-six seconds left in the overtime period, the Auggies surprised the Blugolds with a game-winning goal to give Augsburg the 2-1 win.

The Blugolds attempted nine shots in the overtime period, but were unable to push to puck past Augsburg’s goalkeeper.

“We allowed them to get more shots than we’d like,” Lee said. “I think if we played a full 60 minute game and did all the little things, we would have a better chance in winning that game.”

Deo made his fourth consecutive start and was pretty consistent in his duty has goalkeeper, saving 31 of the 33 Augsburg’ shots.

The Blugolds (2-1-1) will try to get back to winning next weekend as they return to Minnesota for another two game weekend with games against St. John’s (Minn.) on Friday and Concordia-Moorhead (Minn.) on Saturday.