Blugold football wraps up their season 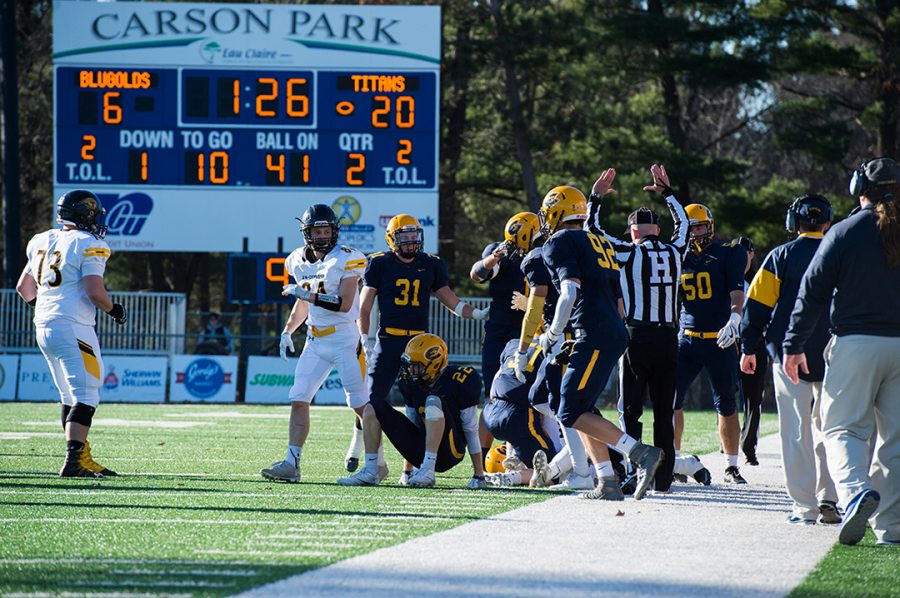 The Blugolds finished the 2016 campaign with two more wins than their previous season.

The UW-Eau Claire football team capped off their season with a 48-13 loss to UW-Oshkosh Saturday at Carson Park. The Blugolds final schedule is 2-8, and 1-6 in Wisconsin Intercollegiate Athletic Conference (WIAC) play.

Without the Blugold Marching Band in attendance, having ended their season last weekend with a performance in Indianapolis, the football team had to pick themselves up when times became hard during the game, Bo Casper, Blugold cornerback, said.

Oshkosh came out strong against Eau Claire, outscoring them by a margin of 20-0 in the first quarter of play. However, luck would soon be on the Blugolds side.

During the second quarter, senior wide receiver, Matthew Knapp, caught a 55-yard pass from sophomore quarterback JT Denhartog. That has been a familiar duo this season, but this pass was not an ordinary one. The pass down the left sideline was originally intended for tight end, Nathan Claflin, but upon hitting the ground, the ball bounced off of Claflin’s chest.

While keeping his eye on the ball, Knapp quickly snagged the ball out of the air and scored uncontested.

Going into the locker room at halftime, Casper said he was proud of the way his team was competing despite facing a 21-point halftime deficit.

“Knowing that, for nine of these guys, this was the last game they will ever play,” Casper said, “that gave us a little more motivation. We kept the game going no matter what the score was.”

After returning to the field for the third quarter, Oshkosh would outscore Eau Claire 21-7. The only score of the second half for the Blugolds came with eight minutes left in the fourth quarter, when Denhartog completed a one-yard touchdown run. This put the final score at 48-13 in favor of Oshkosh.

The standout performance, and fittingly so, came from graduating senior Matthew Knapp who caught four passes for 78 yards and a touchdown, and ran for 52 yards on eight carries.

Casper said playing alongside some of the graduating seniors was special.

“It was great,” Casper said. “I’ve played with these guys for four years. They’re family to me. I live with a couple of them right now.”

Kulaga was proud of his team’s performance Saturday, even though the game did not go how they had pictured it.

“We played hard as a team,” Kulaga said. “The effort was there, and we didn’t quit even though the score didn’t come out in our favor. The guys didn’t back down.”

Now that the season has come to an end, Casper said the team is already thinking about preparation for next year.

“Coaches will go out recruiting right away,” Casper said. “The guys will take a little while off, and then back into the weight room to try and get bigger for next year. Then once spring ball starts we will start the journey all over again.”

Eau Claire increased their win total by two this season, after finishing 0-10 in their 2015 campaign. The two wins came on Sept. 24 against Wisconsin Lutheran and Oct. 22 against UW-Lacrosse. The team hopes to build off of this increased win total, and looks forward to continue building the Eau Claire football program next season.