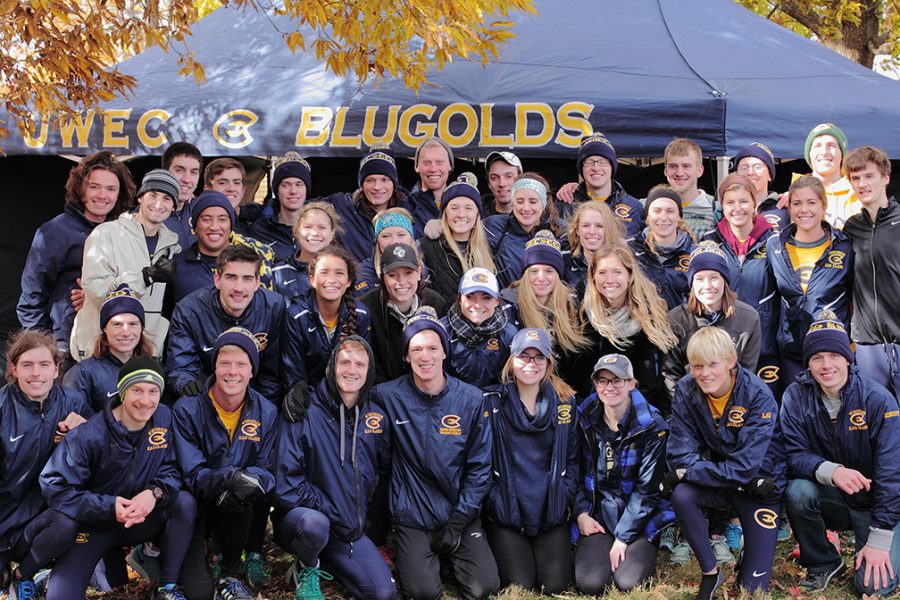 Many team members, past and present, took a roadtrip to support the Cross Country team at their race at the NCAA Championships in Louisville, Kentucky this past weekend.

After spending the majority of the summer and fall running hard every week, the UW-Eau Claire cross country team can finally hang up their shoes.

This past Saturday, the men’s team, along with Callie Fischer and Morgan Marek, competed at the NCAA National Championship. The meet included 32 teams and individual qualifiers from around the country. The Blugolds finished in third place overall with a total of 209 points.

North Central College (Ill.) won by a large margin with a score of 60 points, far ahead of SUNY Geneseo (N.Y.) and the Blugolds. The top four teams earned a spot on the podium and received trophies for their performance.

Spalding University (Ky.) and the Louisville Sports Commission co-hosted the meet at E.P. “Tom” Sawyer State Park in Louisville, Kentucky. Each year the location of the meet changes depending on the bids and which schools want to host.

The season has now come to a close, and most runners will not be competing until the track season starts later in the winter. For senior runner Ryan Graham, he said the ending is bittersweet.

“It has been a fun four years, and what a great way to cap off these four years,” Graham said.

Coming in first for Eau Claire was junior Darin Lau with sixth place overall in the men’s 8K and a time of 24:22. Lau, Patrick Treacy and Nick Petersson received All-American Honors by finishing in the top 35 runners.

Of the seven men competing, only two have ran at the cross country national championships previously; Petersson and Lau. Graham, said the experience was a memorable one.

“These moments are the ones that you’re going to remember for a long time,” Graham said.

Graham also participated in Track and was part of their National team last year and during the 2014 indoor track season. Although he said he didn’t have his best personal race, he helped a couple teammates when the team needed it. He said he loves the team atmosphere of cross country, because they spend the whole summer and fall running together.

“You can’t really beat that feeling, to be able to share these moments with teammates,” Graham said, “that is what makes cross country one of my favorite sports.”

For the women, Marek and Fischer finished in the top 100 and stayed close to each other throughout the race. Fischer finished with a time of 21:46 and Marek with 21:53, just 13 runners after Fischer.

The weekend started on Friday, with a banquet and two speakers. The team also had an opportunity to run the course, which was quite firm. The state park is a popular racing destination, with many cross country races there during the fall season.

At the National Championship, pressure can inhibit a runner’s ability to perform at their highest. Schwamberger said the team acts very relaxed and observes the race just like any other race. He compared the team to the women in 2009. After the women won the National title in 2009, they put a lot of pressure on themselves to do well in 2010.

“We’re just having fun and obviously last year was really special, but they did not dwell on that accomplishment,” Schwamberger said. “They realized that this is a new year and a new team, and that is the special part about it.”