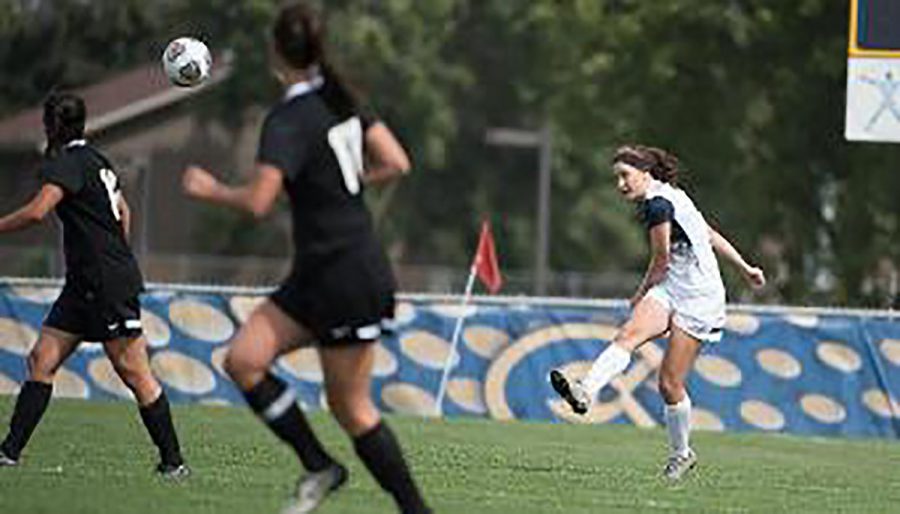 The Blugolds had a strong start with a goal scored by freshman defenseman, Brooke Johnson, off an assist by sophomore forward, Erin Gietman, at 14:23 of the first half.

Just 12 minutes later, senior middle, Jocelyn Etten, scored with a shot at the bottom corner of the net at 26:28 resulting in a score of 2-0 with UW-Eau Claire in the lead.

Senior forward, Caroline Henderson, scored her fifth goal of the season at 35:04, giving the Blugolds a dominating 3-0 lead at halftime.

Henderson expressed excitement over their commanding three-point lead in the first forty-five minutes.

“We absolutely dominated the first half, we did exceptionally well taking the defenders on 1v1,” she said.

“We put Platteville under a great deal of pressure and didn’t let up,” Yengo said. “(It was) probably one of the best first halves of total soccer we played all season.”

Henderson also said that her team has a tendency, in previous games, to control only one half of the game and then struggle to keep their intensity up in the second half.

But this didn’t seem to be the case in Saturday’s game.

At the start of the second half, off sides was called three times within a two and a half minute time span against UW-Eau Claire. This was until Platteville’s forward Yamilex Jaramillo cut down the Blugold’s streak and scored the first goal for the Pioneers at 58:33.

Jaramillo went in for another shot at 89:46, but Blugold goalkeeper, Samantha Lefaive blocked the shot. The game ended with a final score of 3-1, locking in Eau Claire’s first conference win of the year.

Henderson said that the game on Saturday was a great way to start the conference.

“We attacked the flanks well and created quality goal scoring opportunities with good service across the goal mouth,” Yengo said, in regards to what he found impressive in the game. “The first half was also defended well in transition and had a great work rate out of possession.”

The Blugolds outshot the Pioneers 11-8 (nine shots on goal) and took seven corner kicks to Platteville’s one.

Yengo mentioned a few areas where the Blugolds could use some improvement for future games.

“They still need to work on playing a complete game, this team is at its best when they are aggressive going forward and winning the 50/50 battles. When we do this for 90 minutes we are a very difficult team to beat,” Yengo said.

Four out of the five loses that UW-Eau Claire faced, have only been by a one goal deficit.

“We are a young team so we have had to learn and adjust many different components of our game,” Henderson said. “We are definitely coming together as a team now as conference is just around the corner.”

Eau Claire’s next conference game is at 4 p.m. Oct. 5 against UW-Stevens Point.