Taking strides to save lives at Blugold Invite 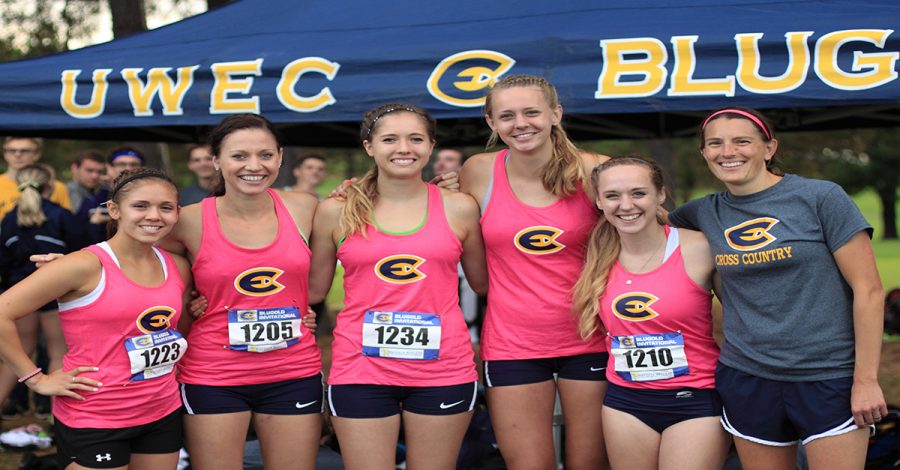 The Blugold women finished third at their first home meet of the season on September 30 at Whitetail Golf Course in Colfax.

The men’s and women’s UW-Eau Claire cross country teams both finished in the top three at the UW-Eau Claire Blugold meet on Sept. 30.

In an effort to raise awareness for breast cancer, athletes were encouraged to wear pink. Spectators and athletes were able to give donations to “Making Strides,” an American Cancer Society campaign.

The meet had less traffic than past years, Schwamberger said, because of another meet happening the same weekend in Minnesota. There were 15 male and 14 female teams present at the Blugold meet.

Eau Claire women came in third place with 89 points and the men finished first with 29 points. In cross country, the team with the lowest score wins. In order to calculate the score, the top five finishers’ places are added together.

For the women, the University of Minnesota finished first with 16 points, followed by St. Olaf (Minn.). The men beat UW-La Crosse, who finished with 69 points, and St. Olaf, closing the race with 96 points.

“The men ran really well. They did exactly what we were hoping; they were patient early and worked together and finished strong,” Schwamberger said.

Schwamberger said he was pleased with the women, but he knows they can perform better. He added that the season is still early and there is room for improvement. Schwamberger said that some people had races that were not reflective of their best performances.

He said the times were a little faster than St. Olaf, as expected. Historically, the course was completed slower than in previous years because of the ground conditions. He said the ground was not as hard and therefore, did not give the extra force that comes with hard surfaces.

Taylor Lather, a junior studying graphic design, said she enjoys the Blugold course because the terrain is more gradual, and there are less hills at St. Olaf.

For future races, Lather thinks she can work on relaxing during the meet and sticking to her pace. Luckily, there is a great group helping Lather go after her goals. She said the team is close-knit, and there is a lot of talent.

Lather also said to find personal success, she needs to maintain a balance between school, social life and cross country.

With another week of training ahead for the Blugolds, Schwamberger said they will continue to make progress with training. Doing what they can to control the small elements, like nutrition, stretching and getting enough sleep are all part of their regimen.

“With another week of training, everyone should be happy with the results and we’ll only get stronger,” Schwamberger said.

The Blugolds compete next at 11:20 a.m. on Saturday, Oct. 15 in Oshkosh for the UW-Oshkosh Invitational.