The team is improving their skills on and off the green 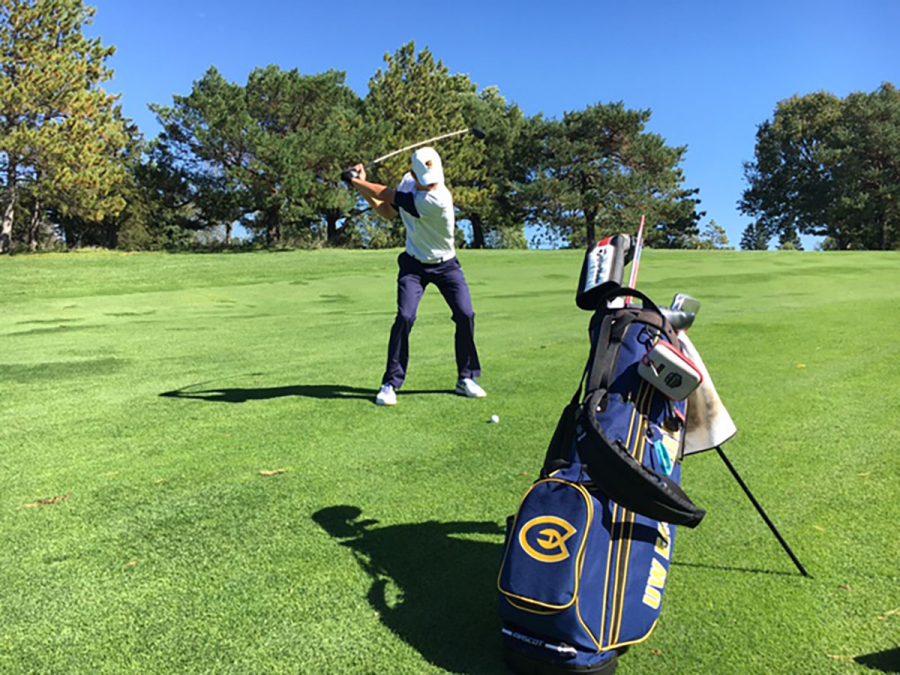 UW-Eau Claire Men’s Golf team places fourth at Twin Cities Class this past weekend. Currently ranked 28th in the nation, the team went up against 16 other teams from the area.

The Twin Cities Classic is a tournament spanning from Saturday through Monday with a total of 16 teams playing four rounds each. Eau Claire’s team took a line up of five golfers competing as a team: Brady Hanson, Joey Dreier, Michael Immekus, Ryan Isaacson and Alex Rogan, and one team member competing individually, David Burger.

One of the team captains, senior Brady Hanson, took fourth individually at the competition scoring 218, or +4 over par, which was just three strokes behind the top score by Saint John’s University (Minn.)  player, Mack Farley.

Throughout the competition, the men faced the challenges with gusty winds and rain on the courses but they didn’t let that affect their game plan. Head coach Courtney Everett said it was the worse conditions the team has seen this season, but they managed to stay focused and hold their ground in the standings.

“The men all said it was probably the toughest wind conditions they had ever played in and yet, they were still able to shoot the second best team score of the day,” Everett said. “The boys really held onto that fourth place spot the whole weekend.”

The Eau Claire Men’s Golf team consists of 12 Eau Claire students who play for both the fall and spring semester teams. A normal golf season is 19 weeks, but the team splits those weeks into two separate seasons.

Despite a rough start to the season, the second team captain, senior Joseph Dreier, said they got back on their feet and have improved their game on the green.

“We had a disappointing first tournament but bounced back and have came back with a better attitude in the past couple of tournaments,” Dreier said.

Dreier has an average of 78.3 strokes per 18 holes and ranked 19th at two of the three tournaments he has participated in this season, one of which was the Twin Cities Classic.

Currently ranked 28th in the nation, Everett said the team has significantly improved their standings from the last spring season. So far, the team placed first at two out of the four tournaments this season, those being the Frank Wrigglesworth Blugold Invitational Sept. 11, and the 2016 Saint John’s Fall Invitational Sept. 17-18.

Off the green, freshman accounting student and golf team member, Michael Immekus, said the team as a whole works very well together even outside of the competition setting.

“There is a great atmosphere with the team,” Immekus said. “All of the guys get along really well which makes practice and tournaments enjoyable.”

Everett said the team’s goal for the rest of the fall season is to make it to Nationals as a team. Previously sending individual senior Brady Hanson, this time around they are trying to get noticed by the NCAA and be selected to the competition as a team, seeing that they do not have any qualifiers, Everett said.

With a new team and more tournaments to come, Everett said she is proud of how her team is doing this season and eager to see how far they will go.

“The men are really putting forth a great effort to play their best against some of the top teams in the region and in the nation,” Everett said. “It just goes to show that these guys are ready to work and keep pushing no matter what.”
The team will travel to Destin, Florida. to compete at the Golfweek Invitational from Oct. 9th through the 11th.