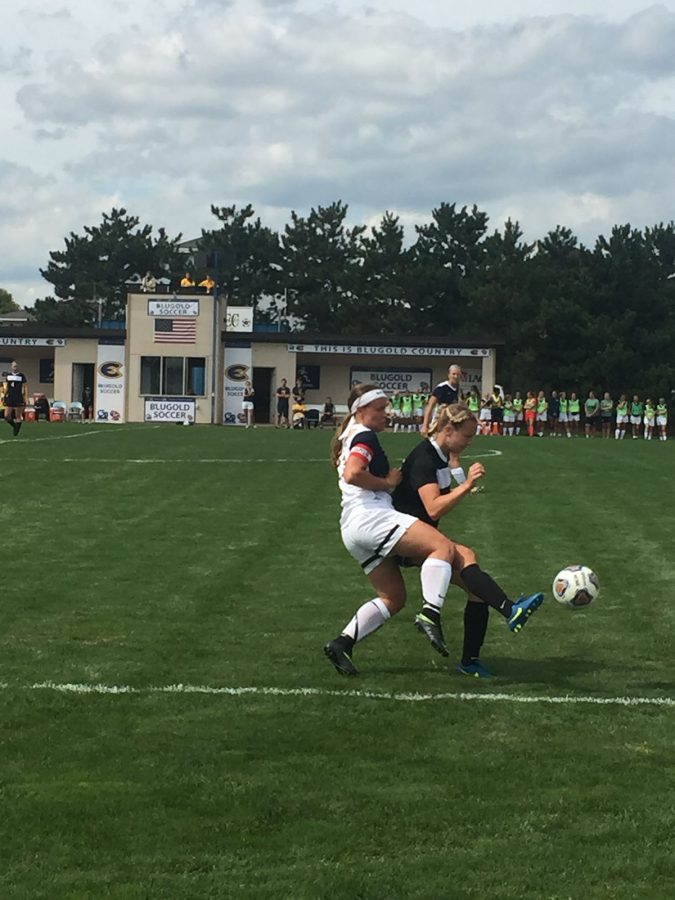 The UW-Eau Claire’s women’s soccer team pushed back against St. Olaf (Minn.) until the end, but the buzzer sounded before they could mount a comeback against the St. Olaf Lions.

Only four minutes and nine seconds into the game, St. Olaf scored the first goal of the contest. It was a back and forth battle at the net, until the Minnesota team kicked the ball past Eau Claire’s goalkeeper, Sammie Lefaive.

At 22:32, a penalty was given to St Olaf resulting in Eau Claire’s senior and middle, Jocelyn Etten, to take a penalty kick which fell short of the goal.

Soon after the missed kick, St. Olaf forged ahead, scoring again at 37 minutes and 55 seconds into the game, resulting in a score of 2-0 Lions at halftime.  Spectators, like Terry Pace, saw areas where the Blugolds fell shorts.

“I think they have room for improvement,” Pace said when asked about her feelings on the first half, “They’re up against a taller and heavier team. They have some great players on both sides. They just need to control the ball more.”

In the second half of the game at 35:20, St. Olaf scored another goal resulting in a 3-0 St. Olaf lead. However, Eau Claire began their push back with a goal of their own from senior forward Caroline Henderson at 33:51.

With six minutes left in the second half, Henderson made another difficult shot, getting the Blugold fans out of their seats jumping and screaming, encouraging the team on their way to a potential comeback.

With only two and a half minutes left in the game, Eau Claire junior Lauren Lenz came in with a corner kick and both teams were fighting for the ball off the line. The ball came within inches of the net for Eau Claire but St. Olaf’s goalkeeper, Julie Johnson, refused to let the ball get past her.

The clock started counting down rapidly from 10 but the ball was on St. Olaf’s side of the field, not leaving the Blugolds enough time to tie it up, resulting in their first home loss to St. Olaf Lions 3-2.

John Geppert said he hopes to be at every Saturday game in order to come and help support his daughter and the rest of the women’s soccer team.