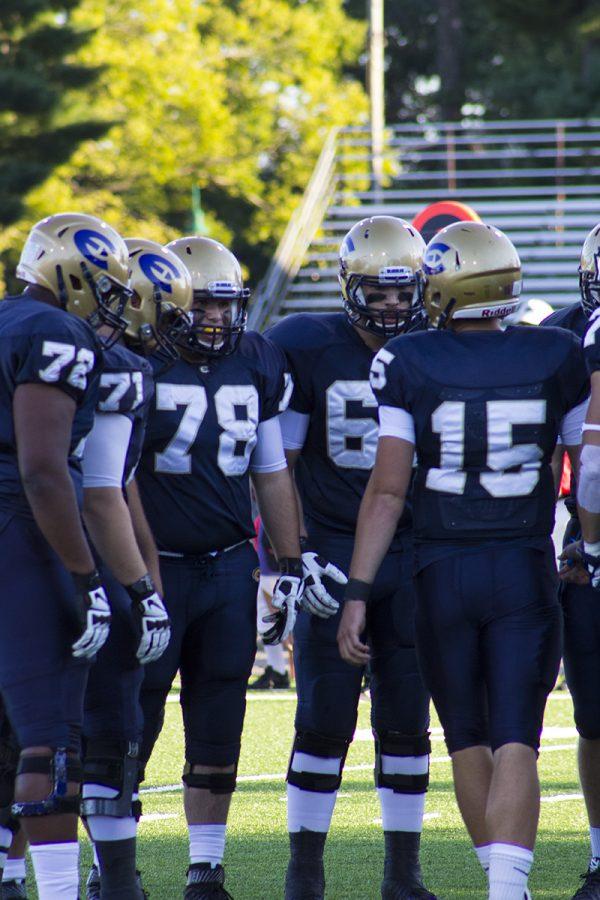 That’s how first-year UW-Eau Claire football coach Dan Larson said his first few months as a collegiate head coach have been like after wrapping up spring practices.

“Different situations and different problems come up every day that you aren’t necessarily aware of when you are an assistant coach,” Larson said, “so I’ve been learning a lot of new things.”

Not only is Larson adapting to his new role as head coach, but he also is getting used to the new players around him, and a new program overall.

Larson said one of the biggest things he has worked on over the past few months has been getting to know the players as individuals and making sure they all know how the coaching staff wants things done.

As time went on, Larson said he continued to get to know all the players better in terms of their strengths and weaknesses on and off the football field, which allows him to better help each individual succeed athletically and academically.

However, Larson isn’t the only one learning in his new position. He said all the assistant coaches, who are also new, are continuing to build closer relationships with players in order to better help them once the season rolls around.

“Every day it’s been a learning process, and it’s not just players that are learning, it’s coaches too,” he said. “It’s been a fast four months, that’s for sure.”

After a 0-10 season in 2015, some would say it is a season to forget, but Larson feels otherwise.

He said they used last season as something to look back on and learn from as they came into spring practice this year.

Larson said the team practices three times a week during the spring without any pads (an NCAA Division III rule) and this year strictly focused on the fundamentals.

Implementing the X’s and O’s of a new offense and defense that comes with a new coaching staff, and focusing on the technique and fundamentals is what Larson said was the focus this year.

“We spent a lot of time coaching guys up on little things and making it known that you win and lose football games because of basic fundamentals and execution,” he said.

Although there has been a whirlwind of information to learn for the coaching staff this spring, the players have been the ones who have had to digest the change.

Junior safety Michael Priefer, who made the switch from the quarterback position to the defensive secondary last season, said the defensive side of the ball is young but is full of good athletes.

Priefer, a natural athlete, said he made the switch to the defensive side of the ball so that he had a better opportunity to get playing time in a defensive scheme that hasn’t changed a whole lot from last season, he said.

The team will stay in their 3-4 defense with three down lineman and four linebackers, however, he said this spring the defense is focusing largely on creating turnovers, something they struggled with last season as they only forced 8.

“We’re trying to get everyone around the ball to help force turnovers,” he said. “Along with stopping the big plays, those have been our two main focuses defensively.”

Offensively, Larson said the team has had a lot of competition at positions like wide receiver due to a wealth of young depth at the position.

Senior receiver Matt Knapp said despite the youth at the position and the growing pains for some of the players, the depth has been huge in making everyone better.

“Starting over with a new offense, it has been quite an adjustment overall.” he said. “We’re learning, and having everyone around to push each other with all of this good competition is something that will help us in the long run.”

Knapp said like the defense, offensively the team has stressed fundamentals all spring when it comes to things like executing blocks and running correct routes.

Knapp said he expects a lot of the team as a whole, and hopes they can build off the tough 2015 season.

“I have some pretty high expectations for this team,” he said. “I’m looking forward to what we can do differently as a team this year, especially with all the change we have went through.”