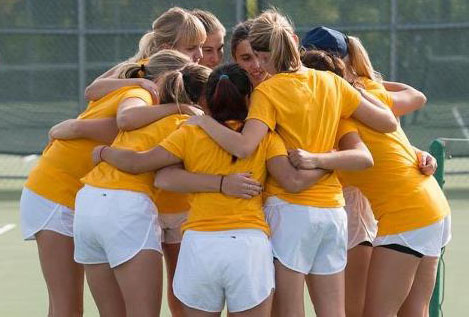 The Blugold women’s tennis team huddles up prior to their final home matches outside of McPhee Physical Education Center this past weekend.

The word coach Tom Gillman used to describe the men’s and women’s tennis team’s 5-4  losses this past weekend.

Although these types of losses aren’t something Gillman said he is used too as coach of the Blugolds, it’s something that happens and that his teams need to use to build off of.

“I don’t think we need to overanalyze these losses, we just lost some close matches,” he said. “It could have gone either way and we just couldn’t pull it off, but we will learn from it.”

The men lost their match on Friday 5-4 against Wheaton College (Ill.) and at one point had match point, but failed to convert to seal the match. However, the men were able to bounce back on Saturday against North Central College (Ill.) and sweep the Cardinals 9-0.

Gillman said he was happy with how resilient the guys were after the loss Friday, being able to bounce back with a new lineup and win with some of their younger players in the lineup.

“We did what we were supposed to do and we were able to get some of our younger players in the competition, so that was good,” he said. “They have continued to show well when they get their chance so that is good to see.”

Despite production from all of the lineup on Saturday in the sweep and some strong individual matches on Friday from many, Gillman said one player really stood out to him over the weekend.

Freshman Daniel Schoen won both of his singles matches with a 7-6, 7-6 win over Wheaton on Friday at No. 4 singles and a 6-2, 6-2 win over his opponent from North Central at No. 2 singles on Saturday.

Gillman said Schoen was a player coming into the season that he expected to compete at No. 6 singles being that he was a freshman, but with injuries early in the season he stepped up in the lineup and continued his success.

“Frankly, when you have a good team four singles is pretty high to put a freshman, I haven’t put many people there,” he said. “To have him do as well as he’s done….it’s been a bright spot and I don’t want to say i’m shocked, but i’m pleasantly surprised.”

On the other side of things the women’s team wrapped up their final home matches of the spring with a 9-0 win over Simpson College (Iowa.) Saturday, followed by a 5-4 loss to the College of St. Scholastica (Minn.) and a 9-0 sweep of UW-River Falls.

Gillman said the heartbreaker to St. Scholastica was a tough one to swallow being one point away from victory during the match, but the team was able to recover.

“I’m not saying it was as bad as what happened to Jordan Spieth in the Masters,” he said. “But it’s sports and in some cases you can play well and do well and it can look like you mess up but you really do okay, and that was us this weekend.”

At noon this Saturday the Blugold women will face the University of Minnesota-Duluth in Duluth, while at 3 p.m. Friday the men will take on Augustana College (Ill.) at Augustana.