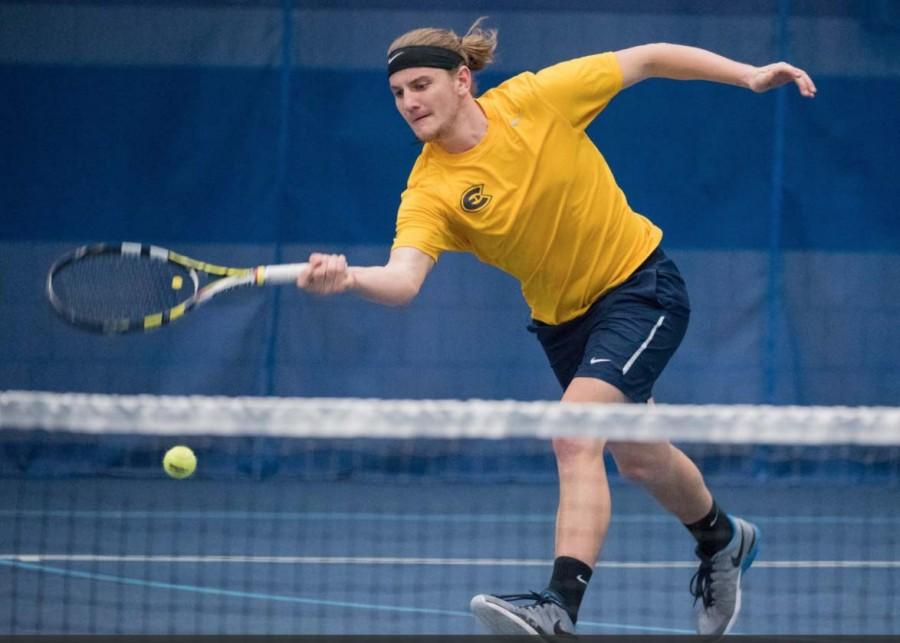 For most teams or athletes starting off a new season, getting back to the same level of play or improving after an offseason is often a goal.

However, this spring the UW-Eau Claire women’s tennis team has struggled to reach the level of play they were at in the fall, coach Tom Gillman said.

“We’re just not on our game to the level that we can be,” he said. “We had an amazing fall and we just haven’t quite captured the way we had been able to play yet this spring.”

Over the weekend, the Blugold women found themselves in a hole 2-1 to Luther College (Iowa) after doubles play with the lone win coming from freshman Molly Sanvik and sophomore Brooke Volpone at No. 3 doubles.

But as singles play rolled around, sophomore Sarah Henderson, junior Olivia Gallagher and senior Colleen McCullough were all able to pull off wins at No. 1, 2 and 3 singles respectively. However, the bottom half of the lineup wasn’t able to produce another win, which gave Luther the narrow 5-4 victory.

Gillman said the Blugolds are still trying to find the level of play they were at last semester and are digging deep to get back to that place.

“We’re trying to find ourselves on the court right now,” he said. “I think our effort is good and we’re competing, we’re just not feeling as confident or comfortable as we are cable of.”

On the men’s side of things, Gillman said the team is in a good place right now. Veteran players are recovering and being put back in the lineup alongside the younger group who were able to gain valuable experience while filling in.

“We’ve just grown so much in our ability to navigate through competitive matches,” he said. “You can see the maturity on the court with a lot of our players who are juniors and seniors and they just look a lot more confident on the court.”

The men pulled off a 7-2 win over Luther in a match Gillman said was one of his favorite the team has played all year.

The Blugolds were able to sweep doubles play which was kicked off with senior Kyle Hoffman and junior Michael Mauthe competing at No. 1 doubles and winning 8-5.

In singles, Mauthe pulled out a win at No. 2 singles. Meanwhile, junior Will Weyenberg and freshman Daniel Schoen took care of business at No. 3 and 4 singles, each earning a win. At No. 5 singles freshman August Badura was also able to pull out a close match to secure the 7-2 victory.

Gillman said since the upperclassmen have returned from their injuries the team has had many players to choose from for match lineups, which he said is tough for him some days, but depth wise is a good thing for the team.

“All of a sudden we have a lot of people to choose from,” he said. “The guys’ team has a lot of depth, which makes things interesting for me because I have to find a way to make it all work.”

The men have put together a 14-4 overall record since starting spring play in February, only losing one match outside of their spring break trip.

At 4 p.m. this Friday the men will travel to Wheaton College (Ill.). Meanwhile the women will host their only home matches of the spring this weekend. At 9 a.m. Saturday they will take on Simpson College (Iowa), and at 9 a.m. and 3 p.m. on Sunday they will face The College of St. Scholastica (Minn.) and UW-River Falls.