Day two of the invitational canceled due to high winds 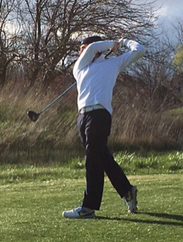 The men’s golf team finished 10th at the Illinois Wesleyan Invitational over the weekend. Day two of the invite was canceled due to weather conditions.

Courtney Everett, new head coach of the UW-Eau Claire men’s and women’s golf teams, has been preparing the men’s team for their first action of the season since she was named head coach in late December.

But then something happened that hadn’t happened in the past four years of Blugold golf.

Day two of the Wesleyan invitational was canceled due to high winds and rain which created unusable greens, Everett said.

“With conditions like that you can’t have a stable bar,” she said. “It came down to if the ball was actually playable and will it move and the coaches decided it wasn’t.”

Despite only one day of action, Everett said she was happy with how the men played. She said the 10th place finish doesn’t accurately depict how they played because they were only down by a few strokes and could have made a push on day two.

Eau Claire never got the chance to chase the leaders, but only finished 10 strokes behind the  second-place team.

With the day one scores counted as final, junior Brady Hanson led the Blugolds, shooting 74 and tying for 15th. Fellow junior Joey Dreier and freshman Phil Johnson both shot a 76 and tied for 29th.

“We talked about swinging easy when it’s breezy,” Everett said. “The guys are really good with poor weather, and I was proud of them.”

Up next, the men travel to the Augustana Invitational at Pinnacle Country Club (Ill.).