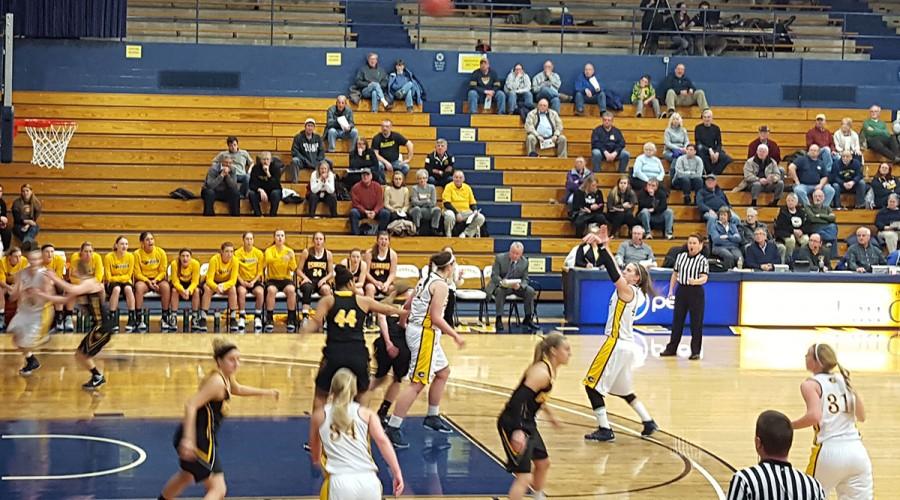 After four straight wins, including a 10-point win over UW-Whitewater in the opening round of the WIAC tournament, the UW-Eau Claire women’s basketball team looked to continue its winning streak when they traveled to UW-River Falls last Thursday night for a semifinal matchup.

Despite jumping ahead early, the Blugolds fell for the third time this season to the Falcons 53-47, after surrendering a three-point first half lead, ending their 2015-16 campaign.

The Blugold offense showed strongly in the first half as the team shot 43 percent from the floor and made six three-pointers to go along with a defensive effort that only allowed the Falcons 29 first half points.

The second half was a different story. The Blugolds see-sawed back and forth with the Falcons as the lead changed three times in the third quarter alone. As one team would make a run, the other would respond with a run of their own, not allowing a lead of more than five points.

The Blugolds entered the fourth quarter trailing by three; that cushion would be all the Falcons would need as the Blugold offense went cold.

River Falls held the lead the entire fourth quarter as Eau Claire cut the lead to one multiple times but no further. The Blugolds shot 18 percent from the floor and did not convert on any three point attempts in the second half.

Junior Arien Becker led the way for the Blugolds with a career high of 14 points. While in her last game as a Blugold, senior Teenie Lichtfuss pitched in 12 of her own points.

The Blugolds end their season with a 14-13 record, going 8-7 in WIAC play and will only lose two seniors in Lichtfuss and Madison Johnson as the team looks ahead to next season.