After competing hard in practice, the Blugolds are ready to put their skills to the test 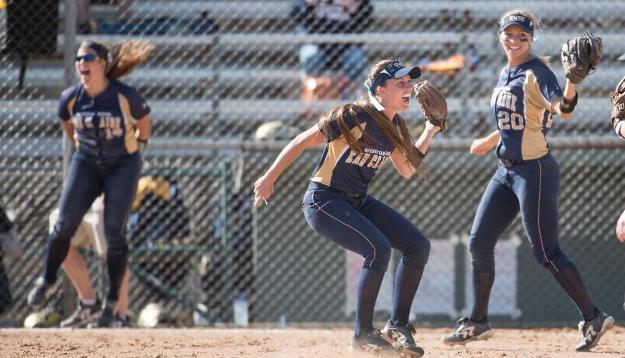 The Blugold softball team has been preparing for their first game of the season and is ready to put their skills to the test.

While most students at UW-Eau Claire are preparing and studying for midterms before departing for spring break, the UW-Eau Claire softball team is busy preparing for their season-opener against Gustavus Adolphus College (Minn.) and University of La Verne (Calif.).

After finishing last season with a record of 26-16, the Blugolds are focused on making the most of every opportunity as they begin their season with 14 games over spring break.

Coach Leslie Huntington is entering her 15th season as the program’s all-time winningest coach. She is excited to see her team take the field on Thursday to play against someone after just practicing against each other, Huntington said.

“I really like the way things have been going in practice,” she said. “It’s like studying for an exam. We’ve studied and studied and now it is time to take the test.”

The team lost six seniors due to graduation, leaving the Blugolds with almost a completely new infield.

Leah Wolff, a junior from Middleton is one of the few returning starters at second base.

“We lost three starting infielders and a catcher,” Huntington said. “I’m looking for Leah to step up and be the foundation of our infield this season,”

Creating a whole new infield might sound like a challenging task, especially at the beginning of the season. However, the transition has been relatively smooth so far, Wolff said.

“As there is for every season, we had some early struggles to start, but now we are playing extremely well in practice and are excited to play our first game,” Wolff said.

This season the team consists of seven freshmen and five sophomores. With the addition of newcomers and players stepping into new roles, the Blugolds have a team that is much different than last year.

With a new infield and proven outfield, the Blugolds return two of their top pitchers. Zana Lorbetske and Lauren Blasczyk, who combined for 15 wins and 186 strikeouts last season, will lead the Blugolds pitching staff.

“I’m excited for our pitchers,” Wolff said. “They have looked great in practice and have been shutting us down. I’m looking forward to them shutting other teams down.”

Coach Huntington doesn’t see many challenges for her team going into the season, she said. There is one area where she is encouraging her team to improve upon: confidence.