Two freshman Blugold swimmers look to be the future of program 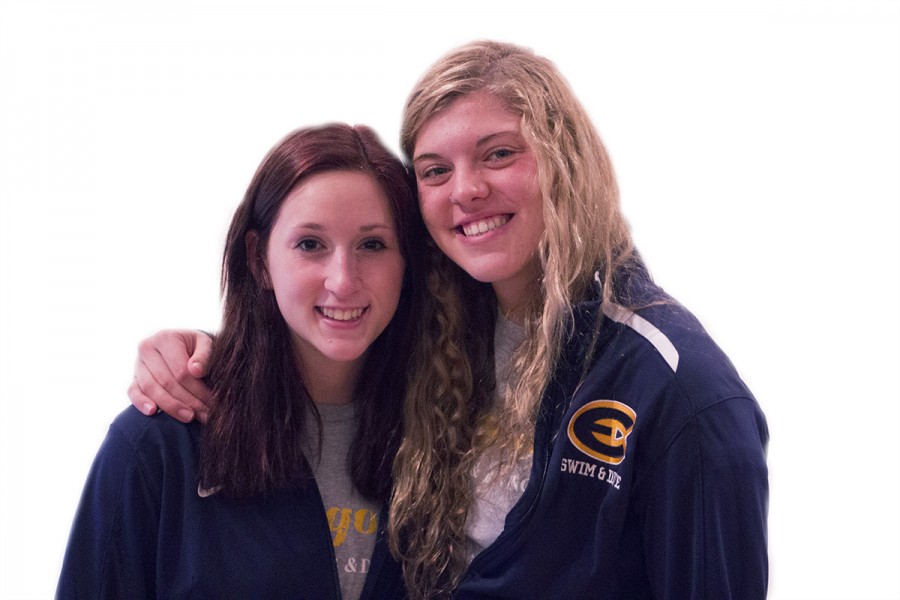 Blugold swimmers Jessica Short and Sam Senczyszyn, friends since elementary school, are two of the 11 competitors being sent to the national meet.

Ever since they were 11 years old, Jessica Short and Sam Senczyszyn shared a love for the water. Their passion for swimming turned into a friendship fueled by competitive drive to improve and help each other achieve new heights and faster times.

During high school, the two competed for the Ozaukee Aquatics club team and swam against each other as conference rivals – Short for Cedarburg High School and Senczyszyn for Grafton.

When it came to picking a university, the two did something they hadn’t done their entire lives: they went their separate ways.
Senczyszyn enrolled at UW-Eau Claire and Short at Texas Christian University.

But by the time the WIAC Championships arrived, Short was back alongside her longtime friend as a teammate once again.

Maybe it was the motivation of having her friend back with her, or the guidance of her coaching staff and teammates, but something clicked for Senczyszyn at the WIAC championships three weeks ago.

With her family, teammates, coaches and friends watching, Senczyszyn was nearing the end of the 200-yard breaststroke event, and though her competitors were in the water, Senczyszyn’s race was against the clock.

Prior to the 200-yard breaststroke final at the 2016 WIAC Swimming and Diving Championships, Senczyszyn came close to breaking the event’s national record in the preliminaries and told her coach, Annie Ryder, she thought she could set a new time and make history.

Ryder told her young swimmer to go for it and as Senczyszyn finished the race, she didn’t know right away if the record was hers.

But as the brief moments of uncertainty passed and were replaced with cheers and excitement, Senczyszyn realized she’d set a new national record of 2:12.20 in the 200-yard breaststroke.

“There was no doubt in my mind that she would get the record,” Short said. “The only question was by how much. Two one-hundredths (of a second) did it and I couldn’t be more excited for her.”

Overall, 11 swimmers, including Senczyszyn and Short, qualified for the 2016 NCAA Division III Men’s and Women’s Swimming and Diving Championships on March 16.

Senczyszyn was named Swimmer of the Meet, and Ryder women’s Coach of the Year, but as perfect as the duo of swimmer and coach looked at the conference tournament, their partnership almost didn’t happen.

About a year ago, Senczyszyn verbally committed to NCAA Division I University of Arizona to swim. Short did the same, except at TCU.
And a year ago, Ryder didn’t foresee either NCAA I swimmer competing for Eau Claire.

With no interest to compete NCAA I anymore and a handful of swimmers she swam club with while in high school on the Eau Claire roster, Senczyszyn said after meeting Ryder she knew being a Blugold was right for her.

If the best things come in twos, then only half of Ryder’s future freshmen tandem was complete.

Senczyszyn said despite being at different schools, she and Short kept in touch and one day Senczyszyn’s phone lit up with a promising text.

“She started asking me about NCAA Division III, and I got super excited,” Senczyszyn said. “Then she transferred here and it has been great.”

Short said she wasn’t happy in Texas and wanted to be closer to home. Like Senczyszyn, a roster full of former Ozaukee Aquatics swimmers and reuniting with a close friend made her decision easy.

By the time spring semester started, Short was a Blugold competing for the women’s swimming team.

Ryder said it has been thrilling to coach two swimmers who push each other to achieve their goals. She said the energy both Senczyszyn and Short bring to practice and meets fuels the entire UW-Eau Claire men’s and women’s swimming and diving team, just as the two freshman feed off their teammates’ experiences to grow.

“I’m excited to see what they can do in the next four years,” Ryder said. “Having them here is not only a benefit to our team, but now we can set our sights on nationals and try to add depth behind these two in coming years.”