The Blugolds’ season likely comes to an end after loss, with only a small chance of reaching playoffs 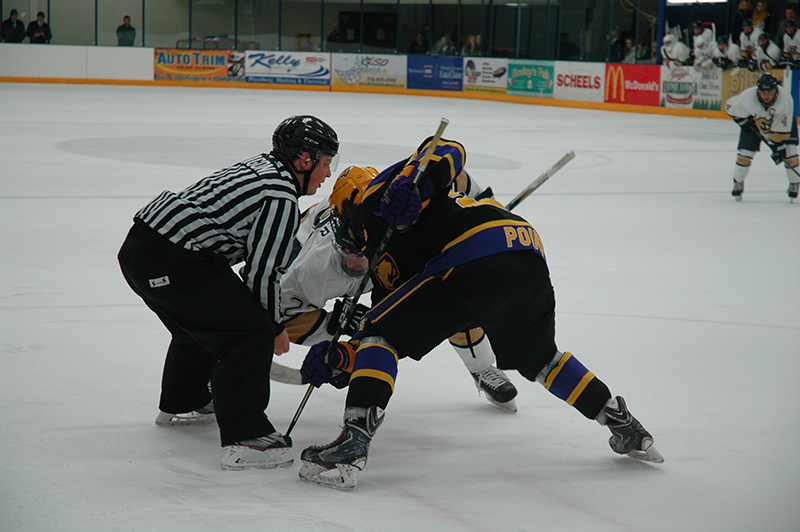 The Blugolds battled both Friday and Saturday night against the Pointers, staying competitive throughout each game.

Trailing by just one goal with the clock winding down to the final seconds, the UW-Eau Claire men’s hockey team tried desperately to get anything past UW-Stevens Point’s goalie.

The crowd held their breath as the Blugolds blasted shot after shot and fought for every rebound. As each second passed, the back of the net seemed harder to find as they tried to take advantage of whatever they could. Ultimately, the Pointers maintained their relentless defense until the buzzer sounded.

In what may have been its last game of the season, the UW-Eau Claire men’s hockey team failed to advance to the WIAC tournament finals, tying the first game 2-2 only to lose the second game 2-1.

Coach Matt Loen said dealing with these games can be difficult.

“That’s the toughest part of my job, that speech,” Loen said. “You know your season’s done and you feel the emotions running through, pretty much everybody’s body.”

Defending Hobbs Ice Arena in Eau Claire and undefeated against No. 3 Stevens Point this season, the No. 10 Blugolds had a few advantages going into the first of the two games of the conference tournament semifinals last Friday night.

However, the Pointers came out fast, scoring their only two goals of the game in the first period.

Eau Claire held Stevens Point in check defensively after that, allowing less shots for the rest of the game than they did in the first period. The Pointers had 15 shots in the first period and 13 in the second, third and overtime periods combined.

Eau Claire shot the puck 16 times in the second period and seven the following period, with sophomore defenseman Lucas Kohls getting his second goal of the season to tie the game 2-2 early in the third period.

The rest of the game, including overtime, remained scoreless. The Pointers and the Blugolds put up two and one shots, respectively, in overtime. Both teams would have to wait until the next day to find out who would move on to the finals.

Loen said he thought the team mentality was “positive” after Friday night’s game.

“We went down two to nothing and came back resiliently and tied it,” Loen said. “I thought that was kind of a moral victory for us.”

Saturday’s game started much like the first one did: with Stevens Point dominating early and Eau Claire trying to catch up.

The Pointers, once again, scored both of their two goals in the first period. Just 2:10 into the second period, junior forward and the nation’s seventh leading scorer Adam Knochenmus put one in, narrowing the gap.

Similar to the night before, the Blugolds didn’t give up. Stevens Point was unable to score, even during a one-minute three-on-five power play following two consecutive penalties by Eau Claire. The Blugolds had more shots than their opponent in the second period but couldn’t capitalize on any after Knochenmus’ goal.

The third period, however, showcased the Pointers’ offensive skills. The puck was played on Eau Claire’s side of the ice for much of the third period as Stevens Point accumulated 14 shots and only gave up eight.

The Blugolds were unable to score again and the realization that their time at Hobbs this season was over set in.

Loen said all he could really do was thank his seniors and hope next season’s returning players will use this loss as motivation during the offseason.

Even though the team will lose its star goalie in Tyler Green, Loen said there is a lot to look forward to about next season. Only one of the team’s current forwards is a senior, so Loen said he is excited to see what the offense can do next year but won’t hold back if anyone needs to be replaced.

“Obviously there’s a lot of optimism there with our forwards if they do the work,” Loen said. “But don’t get me wrong, I’m going to get someone better if I can.”

Nick Hora, a senior at Eau Claire and in attendance at Saturday night’s game, said he loved going to the game for “the intensity and grit” felt among players and fans, but felt the team didn’t play as well as they could have.

“The urgency did not appear to be present,” Hora said.

Hora, a lifelong hockey fan and Blugold fan since coming to Eau Claire, said he is confident the team will continue to improve. He said he’s not worried about replacing Tyler Green, claiming junior goalie Jay Deo “will do a fantastic job.”

Though fans will most likely have to wait until next season to see the Blugolds play again, Loen said he was not optimistic about the team getting a bid to the NCAA Division III national tournament.

Even two years ago, when Eau Claire won the conference tournament only a year after winning the national tournament, the team did not get a bid.

“It’s sad that potentially neither one of (No. 3 Stevens Point and No. 10 Eau Claire) could get a bid to the NCAA tournament,” Loen said.

The NCAA selects 11 teams for its national tournament, yet Loen said teams who aren’t even ranked in the top 15 will get a bid because the winner of their conference gets an automatic bid.

Yet Loen said he is optimistic about the future of his team and the Blugolds’ continued national success is enough to look forward to next season.