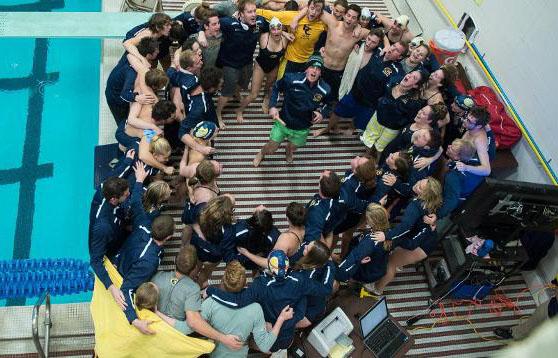 Overall, between the men’s and women’s teams 11 students competed. That’s the most Eau Claire has brought to nationals in 20 years, coach Annie Ryder said.

“It’s pretty awesome, I was super excited about it,” Senczyszyn said. “Last year they took one swimmer and this year we took 11, so that was a big jump.”

Senczyszyn is a freshman student, and is excited for her future as a Blugold swimmer, and for the future of the team, she said.

“To be able to do it from Eau Claire was awesome; to be a Blugold,” Senczyszyn said.

Senczyszyn said she was looking forward to seeing next year’s freshmen succeed, and that the “energy” will carry forward into next year and the team will do even better.

Jessica Short said she was surprised to make the cut for the national team. She transferred at the beginning of this semester and did not train specifically for nationals.

“Nationals was like the icing on the cake,” Short said.

She was excited to compete at the National Championships this year but said she is looking forward to training more thoroughly next year.

The Eau Claire swim and dive team will benefit from this year’s success, Short said. The team will attract athletes who want to compete at a high level.

“People who want to swim in their college careers will be looking at Eau Claire,” Short said. “Because we sent so many people this year, people will be talking about Eau Claire swim and dive.”

Allie Hable is a senior who will graduate this spring. She competed at a national level for the third time this year and said this year was exciting because of the large number of people who were able to qualify.

“I think this is the most we have ever taken to NCAA’s, definitely in a really long time,” Hable said. “I think that it really shows just what the program is turning into. I’m really excited to watch and see how these women are going to develop. We do have a lot of talent that’s graduating, but we also have a lot of underclassmen with talent.”

Hable said she was happy four other seniors got to finish their college swimming careers with competition at the national level, she said.

After graduation Hable intends to keep swimming, whether that be through club swimming at graduate school or through U.S. Master’s swimming.

Coach Annie Ryder, who was named the WIAC coach of the year this season, said she was proud of the team’s performance this year.

“I think they performed really well,” said Ryder. “I’m really proud of how they did.”

Ryder said she is excited to see what the team will achieve next year and in years to come, as this year’s freshman continue to compete at a high level.

“We are going to have a young team, so I’m really excited to see what we can do,” Ryder said. “We definitely have some momentum going for next year.”