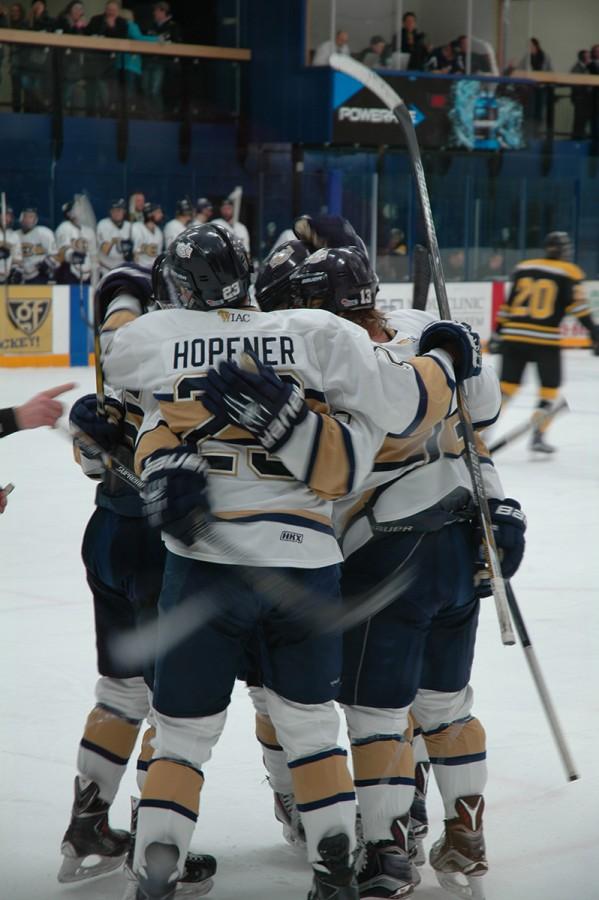 Two of the nation’s best NCAA Division III hockey teams battled over who will have the privilege to play the first round of the WIAC conference tournament — one with a lot at stake — at home in a repeat matchup.

This was a reality for No. 7 UW-Eau Claire and No. 3 UW-Stevens Point last Saturday as the two teams faced off in the last game of the regular season. Before the game, Eau Claire’s conference record was 4-2-1 while Stevens Point’s was 5-2. Thus, the winner of the game would beat the other in final conference standing.

Eau Claire and UW-River Falls ended up tying for the top spot in the conference, although the Falcons received the No. 1 seed in the tournament bracket after sweeping the Blugolds this season.

On Friday night, Eau Claire easily won against the Yellowjackets, even after giving up the first goal early in the first period. The Blugolds rallied shortly after, scoring five in a row before Superior was able to get another one in. It didn’t affect Eau Claire much as they scored four unanswered goals to end the game.

Although they beat Stevens Point, head coach Matt Loen said he felt his team got away with one Saturday night.

“We didn’t play so well against Stevens Point, they dictated most of the game,” Loen said. “Fortunately, we got some breaks and some goals and Jay Deo played probably the best game I’ve ever seen him play.”

Deo, a junior goalie from Langley, B.C., got his eighth start of the season against the Pointers. Prior to this game, Deo’s season high in saves was 31. On Saturday, he had 46.

“… It was good for Jay to build his confidence; he had a really great game,” Loen said.

Adam Knochenmus, the team’s leading scorer, was unable to produce offensively against the Pointers after coming off a hat trick performance against the Yellowjackets the night before.

Loen said the team will need to play much better to beat Stevens Point in the WIAC semifinal, which consists of a two-game series played Feb. 26 and 27.

“I don’t think we want to do anything the same, we want to give more of an effort,” Loen said. “We lost a lot of one-on-one battles so we need to change that.”

The Blugolds are 7-2-2 at home this season, although that may not matter much next to the Pointers’ 10-3 record on the road. Since the team has nearly two weeks off before their next game, Loen said this week he will work on preparing Eau Claire for a better game against Stevens Point.

“We need to change a few things defensively,” Loen said.

The semifinal’s winner will be the team that wins both games. If each team wins one a piece, a 20-minute mini game will follow immediately after the second game.