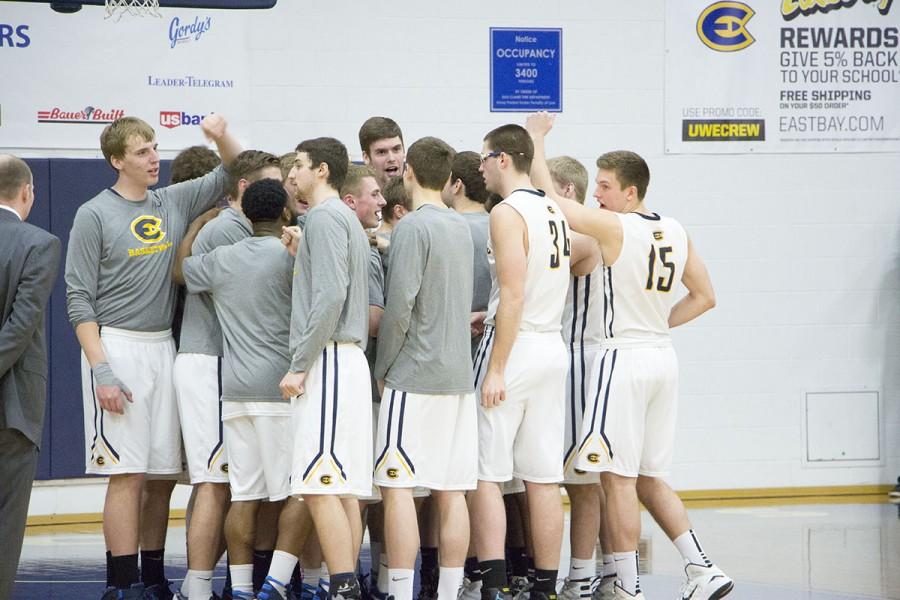 Junior Jack Martinek caught the ball at the high right wing and fired a jab step at his defender to create separation. The move worked and Martinek brought the basketball into shooting position ready to fire a 3-pointer.

After a split second of hesitation, the 6-foot-3 guard shot from long range and scored. As the fans inside Zorn Arena screamed, Martinek backpedaled back on defense with a smirk on his face and a release of excitement.

His basket put the Blugolds up 52-44, and cemented a 14-point Eau Claire run before a UW-Stevens Point timeout.

With Martinek breaking out of his backpedal to head to his bench, the 1,212 people inside Zorn continued to applaud, scream and cheer as if the game was already won.

And despite tying the score twice before game’s end, Martinek’s 3-pointer, the swagger that followed and his 26 points on 9 of 12 shooting, represented the end of Stevens Point’s night and season.

No. 3 seeded Eau Claire won its second consecutive WIAC quarterfinal game 72-66 over No. 6 Stevens Point and advance to semifinal play versus No. 2 UW-Oshkosh.

“It’s pretty unbelievable how he can knock down some of those pull-up jumpers,” Blugold basketball coach Matt Siverling said. “He has played phenomenal for us over the past three weeks.”

Named a WIAC athlete of the week Wednesday morning, Martinek stuck to his usual aggressive offensive tactics with drives to the lane and 3-point plays. But a new Martinek move was on display for the Eau Claire student section Wednesday night – the step back jumper.

The New Brighton (Minn.) native said the step back was a move he used often in High School but just recently revisited.

“I’ve been pretty confident with it lately, though it wasn’t dropping in the beginning of the year,” Martinek said. “I’m going to shoot it if it’s open and it was falling today.”

Only sophomore Chris Duff matched Martinek’s efficient scoring night, but Duff’s contributions came from behind the 3-point line as he buried three in the first half.

The 6-foot-5 forward didn’t shy away from the moment in his first collegiate playoff action and finished with 14 points.

“First thing I said at halftime was, ‘Thank god for Chris Duff,’” Siverling said. “He was the one who kept us in the basketball game. He’s so calm when he is out there and is just that smooth.”

Up next for Eau Claire is Oshkosh, who the Blugolds split the season series with.

WIAC semifinal action is set for 7 p.m. on Friday at UW-Oshkosh.