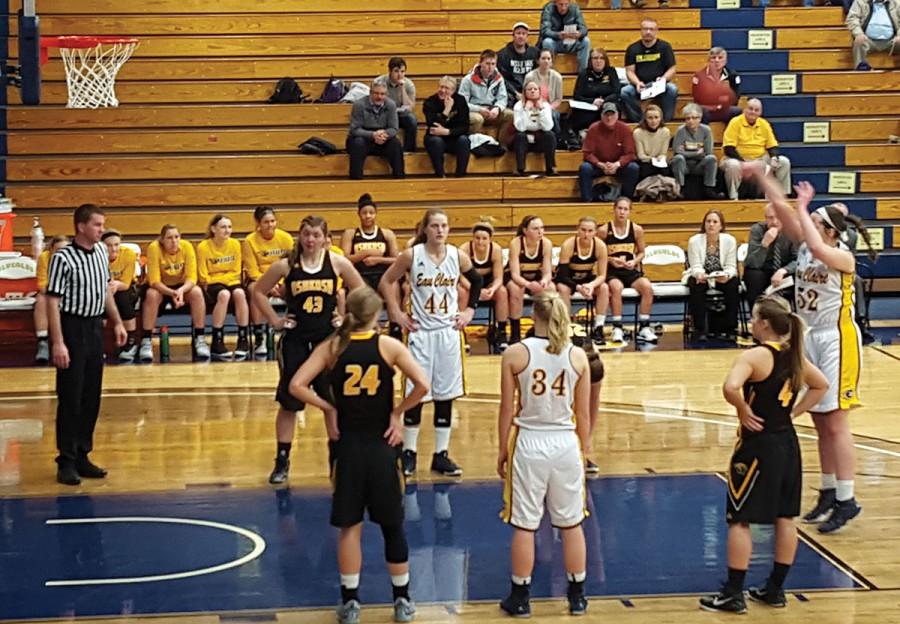 When a team can take their opponent’s leading scorer out of the game with double teams and triple teams, the success rate is rather high.

Such was true Wednesday night in Zorn Arena as the UW-Eau Claire women’s basketball team struggled to get the ball in the basket in a 57-44 loss to UW-Oshkosh.

The conference’s leading scorer, sophomore Erin O’Toole, who came in averaging over 19 points per game, was held under her average as she scored 13 points while shooting 3-12 from the floor. Meanwhile, the Titan’s Taylor Schmidt had an answer for every Blugold run as she had 14 points of her own.

Head coach Tonja Englund said the Blugolds continued to battle and tried to make runs at Oshkosh throughout, but just as they would start to make a run, the Titans would counter with a response.

“We had a slow start, which has been a theme for us, but we dug ourselves out and we cut the lead,” Englund said. “I thought it was second effort stuff, there were times when it was a defensive rebound or a loose ball and we also missed some two-foot shots we couldn’t finish.”

The Titans came out early with an 11-0 run before the Blugolds got on the board, and continued to shoot well as they shot 52 percent from the floor while Eau Claire struggled, only shooting 35.7 percent from the field.

The theme has been similar throughout the season in both wins and losses for Eau Claire, Englund said, as they have been able to score well and put some quarters together, yet have struggled to put the full game together.

Along with this, Englund said throughout the season teams have continued to send extra defenders to stop the Blugolds inside game, which is where a strong perimeter shooting game is needed.

On the positive side of things for the Blugolds, Englund pointed to strong defensive play throughout despite foul trouble early and a few mental breakdowns as the Titans who average 68 points per game were held to 57.

As the Blugolds look ahead to their final three conference games, they will face UW-Stevens Point at home before finishing the season on a two-game road trip against UW-La Crosse and UW-Whitewater.

Englund said Stevens Point is a team that matches up with them really well inside as they are a very physical team, so this will force them once again to make their perimeter shots and avoid a slow start.

Despite the struggles of late, Englund still feels that no one in the conference will want to play them come tournament time.

“We’re still playing for an opportunity to host a game in the WIAC tournament,” Englund said. “I feel like with our team no one wants to play us as we are pretty dangerous, we just need to play a complete game.”