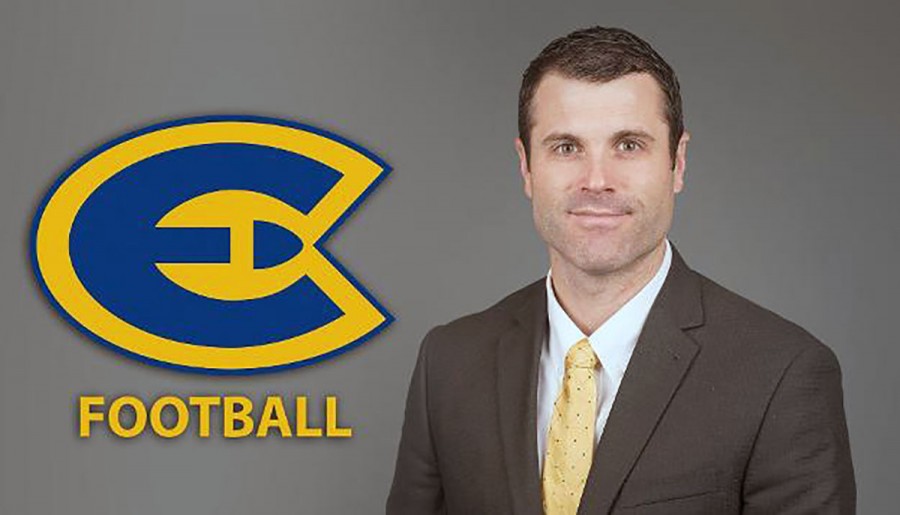 After a winless 2015 season, Matthew Knapp, a soon to be senior wide receiver, said any change for Blugold football is “good” right now.

Although the season is still over six months away, Knapp said he and his teammates are excited to get started.

“He definitely seems pretty knowledgeable about the sport and we can tell he cares already,” Knapp said. “I think we’re all looking forward to it … and (we’re) ready to get started.”

During the hiring process, Director of Athletics Dan Schumacher said he thought Larson was an “impressive” candidate for the job in a multitude of ways.

“I think what’s most impressive about him is his progression of his career and the steps he’s taken professionally to get this position,” Schumacher said.

For the past three seasons, Larson served as the University of Minnesota-Duluth’s offensive coordinator, which was ranked within the top 15 nationally in several offensive categories. While at Duluth, Larson led the offense that won the Bulldogs the Northern Sun Intercollegiate Conference (NSIC) championship two years in a row (2013 and 2014).

During the 2015 season, the Bulldogs took part in the Mineral Water Bowl after ranking in the top ten nationally for red zone offense and time of possession, as well as 17th nationally for rushing yards.

But what Schumacher believes stood out the most was Larson’s success at Macalester College (Minnesota), a school that is tougher for student athletes to get into, having a 35 percent acceptance rate as of 2010. Schumacher said “there’s only so many rocket scientists who are also football players,” which is why he felt Larson would be a “great decision” for UW-Eau Claire.

Another benefit in selecting Larson, Schumacher said, was his ties to the school as well as the community from his time here playing football and pursuing a degree in mass communications and public relations.

His “strong” ties to this community, Larson said, is the reason this job was so appealing to him when he applied for it.

“Being an alumnus, I believe in the education part of this, the community of Eau Claire and that I can support a winning football program,” Larson said.

Though at times “a bit odd,” Larson said being back has overall been a positive, exciting experience.

“It’s been fun to be back. And a little bit weird,” Larson said. “You know, walking into Zorn Arena as a graduate; as a head coach.”
Larson is determined that next season will be better, not just for him or the players, but rather for the program and entire Eau Claire community.

“I care a lot about this program. I‘ve played with a lot of guys … who care about this. It’s a lot of alumni’s hope that they’ll be proud to say they went here and still feel that connection and tie (to the university),” Larson said. “It brings a sense of pride back to the program and the community. I want to win because I know how much Eau Claire winning means to a lot to players, current and former.”

Right now, Larson said their goal is to focus on the positives, despite last season’s slump.

“There are more reasons to win here than that we can’t,” Larson said. “Our whole motto is going to be to be prouder today and to find a way to get better at something tomorrow …. constant, consistent improvement is what we’re looking for.”