Missing a piece of the puzzle 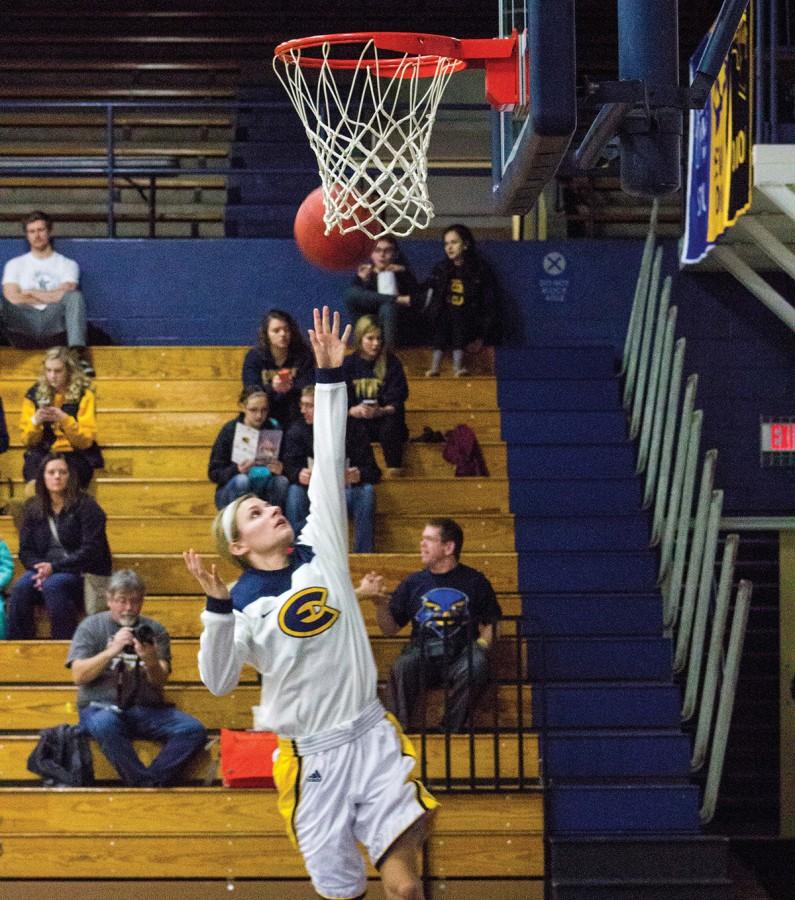 Freshman point guard Maddie Dunathan warms up before the Blugolds home opener this season. Dunathan has been installed in the starting lineup in the last few games to help give the team some speed.

As the halftime buzzer sounded, the UW-Eau Claire women’s basketball team trotted to a corner entrance of Zorn Arena and met with their parents as they waited to be recognized in front of a packed gym on parents night.

Player’s spirits were high all around as junior Arien Becker had just hit a buzzer-beating layup to take a 26-21 lead going into the half. That was all but sophomore center Erin O’Toole.

O’Toole was knocked down onto the floor midway through the first half, and after leaving the gym with a trainer for tests, returned to the bench in her warm-up shirt with a look of frustration.

O’Toole wouldn’t return the rest of the game after scoring seven quick points in the first half, and the Blugolds faltered from that point on Saturday in a 61-47 loss to Wartburg College (Iowa).

Head coach Tonja Englund said despite a struggle to shoot the ball all night, losing a post presence like O’Toole played into the Blugolds struggles.

“I thought that was the difference-maker from the first half to the second half was not having that inside presence,” Englund said. “The reality is that O’Toole is averaging 16 a game on the inside. When you lose that, that really changes our look.”

After the loss of O’Toole, the Blugolds went cold offensively as they shot a season low 27.3 percent from the field and a dismal 2-for-23 from behind the 3-point line.

Two Blugolds reached double figures in scoring as senior Teenie Lichtfuss led the way with 15 points, followed by senior Madison Johnson who had 12 of her own.

Early on the Blugolds looked inside to their duo of O’Toole and Johnson following their game plan, as the two combined for 15 early points. In the first half, 18 of the Blugolds 26 points came from scoring within 10 feet of the rim.

Lichtfuss said she felt like after what was a solid first half, the Blugolds strayed away from the gameplan and what they were doing well inside.

“In the first half, we played a lot to game plan and stuck with what was working for us,” Lichtfuss said. “Then in the second half, we kind of went away from it.”

As the Blugolds struggled from outside in the second half, the Knights picked up their outside shooting and continued to attack inside against a defense missing it’s anchor inside, going on a 12-0 run in the third quarter to take a six-point lead.

Wartburg guard Katie Sommer led the way with a game-high 22 points, as she hit all five of her 3-pointers and continued to answer Blugold scoring runs with baskets of her own.

Englund said with the injuries inside, the Blugolds had to switch from playing man defense to a zone defense which allowed the Knights more open perimeter shots.

“We started out playing man defense and did a really good job defending the perimeter,” Englund said. “But when O’Toole got hurt and we got in foul trouble, we had to play some zone, which is not what we wanted to do.

With no timetable on the undisclosed injury to O’Toole, the 2-4 Blugolds currently sit without two of their top post players in O’Toole and junior Ellen Blacklock who hasn’t seen the floor yet this season.

At 5 p.m. Saturday, Eau Claire will host North Central college (Ill.) in Zorn Arena as they look to get back