Blugold athletes find success not only on the field, but in the classroom 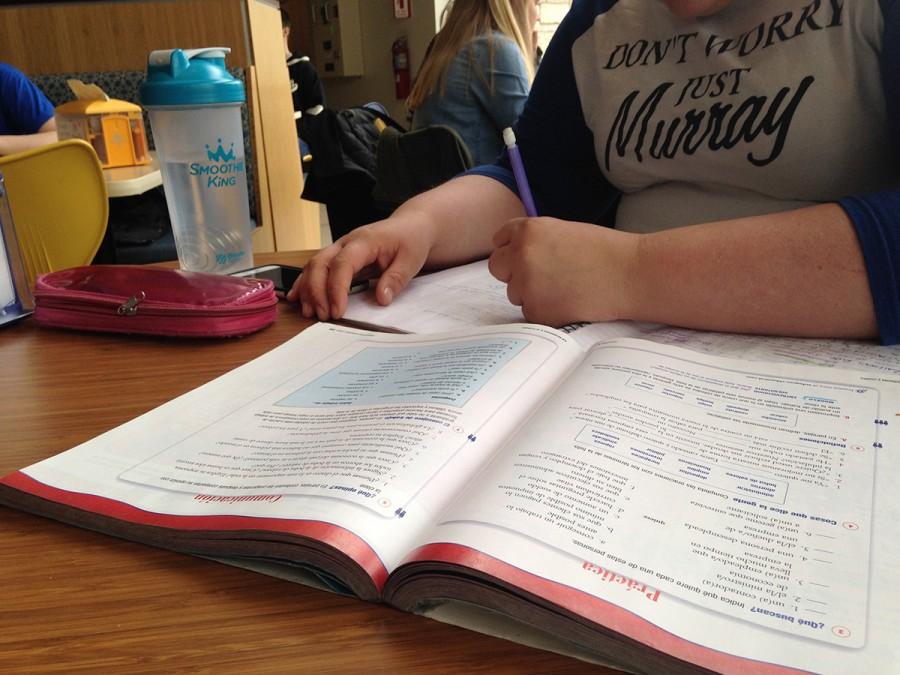 With finals looming, students are finding extra time throughout the day to study, including their lunch hours.

For most college students, taking classes, working a part time job and having a social life are a balancing act. For collegiate athletes, their sport is thrown into the mix, making it a little more complicated.

Earlier this semester, the WIAC announced the recipients to their collegiate athlete academic honor roll for 2014-2015. To be named to the honor roll, athletes have to obtain a 3.0 grade point average or better.

Senior Joel Newman, quarterback for the football team, was named to the list. Graduating in December 2017 with a Spanish education major, Newman said he’ll be in school for four-and-a-half years.

Although that’s a semester longer than usual, Newman said that’s how it works out for education majors, and football didn’t affect his academic plan.

Newman said his tactic for scheduling is to take a lighter load of classes in the fall time and load up on credits during the spring. This semester, Newman is taking 13 credits. In the spring time, he averages 16 or 17 credits.

Even with the balance, Newman said there’s sometimes conflicts in classes and when classes are offered. Newman’s had to take classes that interfere with football practice because it’s the only time the class is offered.

In those situations, Newman said communication with professors and his coaches is key.

“Professors are really good (about understanding),” Newman said. “As athletes, if we’re proactive and we explain to them if it would be possible to do a group presentation or individual project after the season ends … most professors are good about that.”

Senior soccer player Ashley Seymour said at the beginning of her season, her coach tells everyone when not to schedule classes so they can attend practice. However, like Newman, Seymour said some of her teammates have conflicts between class time and practice time, herself included.

In those situations where someone has to miss a practice, Seymour said it’s up to them to make up what they missed at practice.

“Sometimes you miss (practice), so you have to find another way to make it up and just go to the field on your own time,” Seymour said. “The coaches don’t tell you you have to (make up practice), but you know you should. Often I would stay after practice a little bit.”

Softball head coach Leslie Huntington said there are maybe two times during the season where athletes have to be away from campus for a night or two. In those situations, Huntington said, they try to schedule those games on the weekends so games aren’t missed.

Since softball starts later in spring semester, Huntington said she knows about two months in advance what times work best for her athletes in terms of practicing.

“If we have a day where there’s a lot of players who have class until 5:00, we may choose to have that one day each week where we practice in the morning instead of the afternoon,” Huntington said. “There’s just different things I try to do to be creative.”

Even with the challenge of classes and practice, Newman said throughout his time as a Blugold athlete, he’s found if he’s proactive about communicating with his professors and coaches about conflicts, everyone’s more willing to be flexible and help to work things out.